We here at Nerds on Earth are upfront and honest about the things that just don’t quite grab us: Doctor Who, DC comics (we are admittedly overwhelmingly Marvel people), and anime reside atop our lists.

I’ve actually pitched the idea of covering some anime to the other Nerds before, but I’m by no means an expert.  Heck, I’m not even sure if the anime I’ve enjoyed is considered “good” anime.  I just know what I’ve liked and what I haven’t.

I love Dragonball Z, but couldn’t get in to Full Metal Alchemist.  Cowboy Bebop is fantastic, but Inuyasha never stuck.  I also got into Blood, Death Note, Ghost in the Shell, Akira, and even Naruto – and this is not to mention any of Studio Ghibli’s fantastic roster – but I couldn’t even begin to list the obscure (to me, at least) titles that I gave a try and ultimately passed on.

Anime has been largely hit or miss with me over the years.  Part of this is likely due to the fact that I’ve tried some number of shows and movies from under the “Anime” heading on Netflix, but we all know how hodgepodge the quality of titles under any Netflix category can be.

I did stumble onto one significant gem: Attack on Titan.

One of my old college roommates, a companion of mine for many an episode of Dragonball Z, planted the title in my ear, so when I saw it streaming on Netflix I figured, “What the heck?  I’ll give it a shot.”  Twenty-five episodes later, I was begging for more.

Now, if you aren’t already familiar with Titan, you may have at least heard of it recently as two major announcements have been buzzing around the internet of late: A promised second season and a live-action movie adaptation (click the link for the newest official trailer).

Still not ringing any bells?  Well let an anime-noob explain why he gets big, sparkly anime eyes over all things Attack on Titan:

In the show, giant humanoid beings called titans arrive on humankind’s scene with the munchies, nearly wiping all of humanity out in short order.  The humans consolidate, surrounding themselves with three concentric, unscalable, impenetrable walls with the rich calling dibs on the innermost space while the poorer agricultural types live in the outermost ring.  For 100 years, mankind experiences peace and enjoys the protection afforded by the walls while building defense forces capable of felling titans if necessary.  Everything is copacetic until an even giant-er titan shows up and kicks a hole into the outermost wall like it ain’t no thing, letting the others in.

And all of this during the first episode.

(Side note: Part of what makes the titans so frightening is there seems to be no need for their attack upon or consumption of the humans.  They don’t eat humans to survive.  Instead, they seem to do it for sport at best or for purely terroristic reasons at worst.)

The story centers around Eren, Mikasa, and Armin: three youths who witness the titan invasion and the nightmare that comes with it.  Eren, who already romanticizes being a member of the military, is pushed over the edge after watching his mom get eaten – again, in the first episode.  There’s a lot of death in Titan, rivaled in number only by teeth. 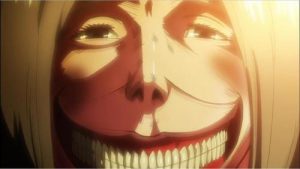 Eren and his friends join the ranks of the military, and the show follows their story which is fraught with danger, riddled with twists, and overflowing with blood.  I can’t outline much more without spoiling some of the show’s more noteworthy moments of surprise, intrigue, suspense, and excitement here.  But hear me when I say that the story is so compelling and dynamic that you’re not given the opportunity to “settle” into the narrative before something happens that changes everything.

Attack on Titan is not a hit by accident, and it is streaming in its entirety on Netflix.  If you’ve never given anime a chance, I’d be willing to wager the success or failure of the genre in your opinion on Titan.  The second season is not due out until 2016, but the movie is set to hit theaters in Japan later this year, so get to it!  You know…so you can watch the movie later and do as all nerds do: ridicule it for not being the show/comic/book.