As I’ve stated previously: Anime has never really been my strong suit or passion, but when it is good, it is undeniably good. The best animes out there are a captivating combination of an intriguing concept executed by lovable characters in a visual tour de force. You can’t tear your eyes away and each episode is the television equivalent of a page-turning novel, leaving you absolutely thirsty for what happens next.

Death Note is one such anime gem.

And here is the interesting thing about Death Note: It shines without the visual flair. You don’t blow through the show’s 37 episodes six inches away from the television so you can see every powerful jutsu, every transformation, or every blood spout in all its glory. That’s not to say the animation is mediocre at all, but but by the nature of its concept, that stuff is minimized.

Light Yagumi is a boy genius who stumbles across a death note: a notebook that will kill anyone whose name is written in its pages and whose face is known (so you don’t kill every John Doe, just the one you’ve got in mind!). If no means of death is specified, victims die of a sudden heart attack – the cause of death for 98% of the show’s victims.

He has in mind to rid the world of evil and be its master, so Light starts ridding the prisons of inmates one evening news piece at a time under the pseudonym Kira. His pattern is quickly identified by the mysterious L, a faceless but world-renowned detective who has yet to leave a case unsolved.

Can Light stay one step ahead of L and create the utopia he envisions?

Death Note is driven by anticipation-laden deductive reasoning battles, the rules of the fictional world in which it takes place, and dramatic irony so palpable you won’t know who to root for: Light or the people trying to catch him. It is literarily beautiful.

Review of Death Note: Trying to Catch a Killer

The non-stop cat and mouse game between the wits of Light and L is dizzying. Light goes to some outrageously complex lengths to try and throw the great detective off his trail, but while L is found to occasionally become distracted, he is never once shaken.

The whole series truly is a battle of the minds narrated overwhelmingly by the inner thoughts of either Light or L. Great lengths of many episodes are simple panning shots of one or the other sitting motionlessly while dialoguing with themselves. This may not sound thrilling, but the dramatic irony that fuels the deductive back-and-forths of these two characters makes it downright stimulating to sit in on.

Dramatic irony is at play when the audience knows what a character (or characters) do not. As the viewing audience, we’re made privy to every thought of every character, so the main question that steers the narrative, “Who is Kira?”, is a non-issue. Instead, we’re left drooling over the question, “Who wins?!” Not only is Light’s dad the lead detective on the Kira case (second to L, that is), but Light himself manages to get recruited to the Kira Taskforce! Where better to hide than right in the open, no?

And the devil of it all is the show’s design kinda demands that you root for Light who is most definitely the villain. Classic anti-hero angle: Do you root for the killer because he’s only ridding the world of evil, or do you pull instead for those trying to stop him?

Tsugumi Ohba, Death Note‘s manga author, did a fantastic job of creating, establishing, and delineating rules and leveraging them in increasingly complicated manners. Death notes have rules, see. Lots of them. But don’t worry, you don’t have to know them all to appreciate the masterful job Ohba does of 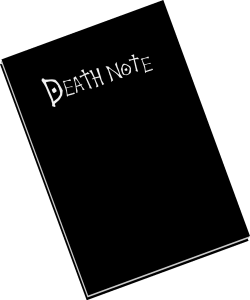 leveraging them to great narrative effect. Lots of twists and turns in the storyline are born directly from Light learning and utilizing the rules of the notebook to his advantage while evading L’s suspicions and maintaining the Kira moniker.

Light, you will find, is one determined wannabe overlord.

I give Death Note an 8 out of 10. It falls short of higher heights because of a stagnation, in my opinion, of the beautiful deductive reasoning that makes it great after a particular happening about 85% of the way through the show which I won’t get in to here for spoiler-y reasons, but the show still finishes out well.

It is streaming in its entirety on Netflix right now and it has English dubbing so you don’t have to read to keep up! Double win.

Thanks so much for reading. We hope you enjoy Nerds on Earth. If you do, please help us spread the word by sharing via the social media buttons below.

How Real is Your Science Fiction?