Your Wish Has Been Granted: New Dragon Ball on the Way

By Michael Adkins On May 5, 2015 Last updated May 5, 2015
Share TwitterReddItPinterestFacebookEmailPrint

In middle school I was introduced to Dragon Ball Z and fell madly in love.  I rocked the shirts, I bought the VHS tapes (#og), I played the video games, and I’d be lying if I said I never tried to power up in my garage when no one was home and I was free to scream at the top of my lungs – an absolutely essential step to the process.

Even today I have a soft spot for the Z Warriors, and some recent pieces of news have me as excited as Goku at an all-you-can-eat buffet.

First up is the upcoming release of a new movie entitled Fukkatsu No F or, in English, Resurrection of F or Revival of F; the “F” in question referring to Frieza.  It has already released in Japan and is supposedly slated for release here in the US come December.

My hopes are that it is better than Battle of Gods, which was weak sauce in my opinion: Way too much cheese-factor, limp noodle plot, and very anticlimactic.  The whole “saiyan god” bit is kinda cool in concept, but I do wish Funimation could find a new way of showcasing power levels.  We’re typically shown in one of three ways:

1. Numeric Power Level.  Such as Vegeta’s meme-worthy “Over 9,000?!”  They’ve largely done away with this because the numbers are astronomical at this point.

2. Point of Reference. Usually given to us in word form, too.  Actual quote from Goku when he ascended to Super Saiyan Level 3 (bold added for emphasis):

Another way they do this is, of course, giving the newly leveled fighter the upper hand in the fight.  And maybe this is the only way to do this and I’m just clueless…But the fight itself doesn’t look all that different; the only thing that changes is the advantage.  Goku’s fight with Frieza on Namek doesn’t look all that different from his fight with Beerus in Battle of Gods when it comes to mechanics.  Make sense?

3. Aesthetic Changes.  In the same scene above, Babidi retorts, “Heh, what a useless transformation.  You’ve changed your hair.  So what?”  The addition of hair, the removal of hair, different colored hair and eyes, even whole-body transformations such as Frieza showcased on Namek…They’re all cool and exciting, but I want to see the fight somehow evolve, not just the fighter. 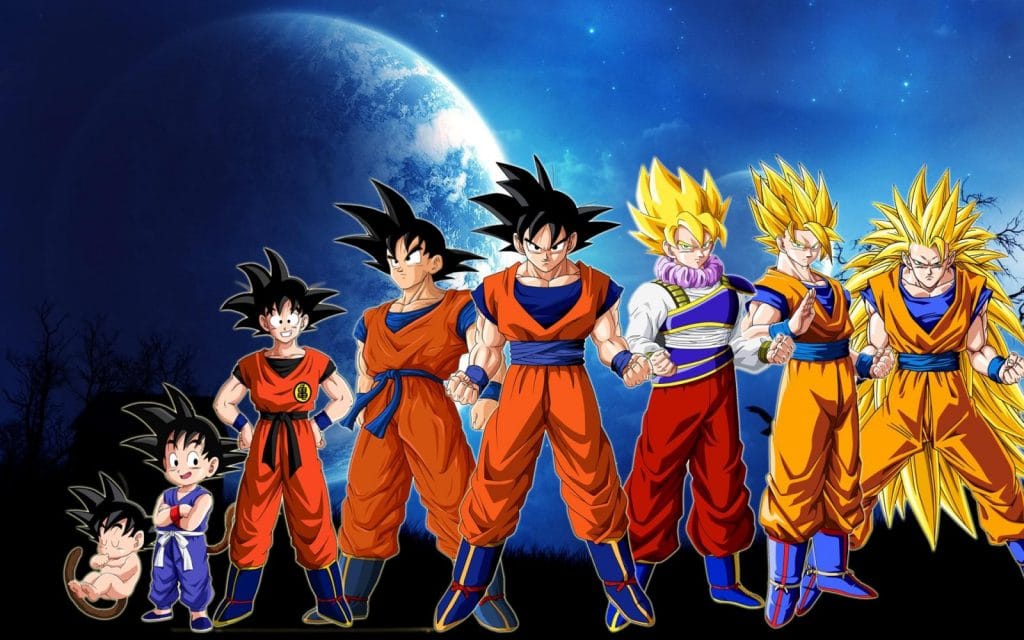 Which leads me to the second major announcement:  Toriyama is working on a new Dragon Ball series that takes place sometime after the Majin Buu arc.  Dragon Ball Super, as its to be called, is set to debut in Japan this summer.  I personally cannot wait until it finds its way here!

My hope for the new series:  It finds a way to make saving the world a team effort again.  Listen, I understand it is likely to always come down to one of the Z Fighters in the end (likely Goku), but I like it best when the others have some skin in the game, too.  (And to be fair: the trailer for the new movie does show some of the non-saiyan gang scrapping once again)

In the very least, let some villain who isn’t the new strongest being in the galaxy blunder their way to earth and start a fight.  Ever notice how that doesn’t happen in the series?  It is like the earth has a restriction sign akin to the ones outside of certain roller coasters, except instead of minimum height it is minimum power level.  Throw the other fighters a bone!  I’m not saying make it easy; that would defeat my desire for it to require a team effort.  I’m just saying find a way to showcase the other Z Fighters that isn’t the World Tournament.  We love the characters that aren’t god-like in power, too, you know?

Even if my hopes are left unfulfilled, I’m going to watch and love both Resurrection of F and Dragon Ball Super.  I love the characters, I love the action, and I secretly still harbor the belief that I have a power within just waiting to be unlocked by the proper application of a power stance and a good bit of screaming.

Recap and Review of Agents of SHIELD Episode 220: Scars

An Interview With The Designer of the Perfect Cell Dice Game…