In 1982, Jim Starlin made the first graphic novel for Marvel. As direct comic shops were slowly gaining in prominence, Marvel wanted to try and create some books that would be sold exclusively in those shops versus the spinner racker at your local Eckerd’s. So, Starlin, with his cosmic sensibilities took on the task and created The Death of Captain Marvel.

Captain Marvel today is known as Carol Danvers and for good reason. That character has really owned that role over the last decade and the rise of the Carol Corps fan community around her has been great to see. But before her, in the 1970s, Marvel had the character Captain Marvel, which was a mispronunciation of his Kree name, Mar-Vell.

This alien warrior had a pretty unique backstory: sent to Earth to prepare it for colonization, Mar-Vell decides instead to become its protector, while turning his back on his home race.  Over the course of his superhero career, there are all kinds of strange twists, sidekicks, power boosts, etc. 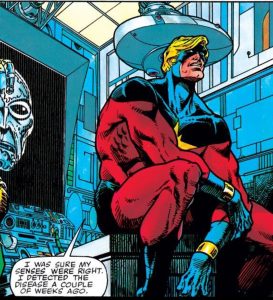 Part of what makes The Death of Captain Marvel so great is that it can serve as a complete book for someone. Sure, it helps to know a little bit about the Marvel Universe but the story is driven early on with Marvel relating his life story to audio files, so the Avengers will have a record. So, he is giving his story, which ultimately ends in confirmation of his self diagnosis: he has inoperable cancer.

2016 may be known as the Grim Reaper. There have been so many deaths in and around the nerd community. As I write this, Carrie Fisher has just passed away at the age of 60. Known for her iconic role of Princess Leia, she was so much more, including a writer and an advocate for mental health. Today, as I have watched Twitter and Facebook, it feels like we are collectively mourning someone together that meant much to us. And, sadly, Fisher is just the latest in this sad year. Over the course of the year, many celebrities have died and passed and social media has become an odd sort of online visitation, where people share what they know and remember. 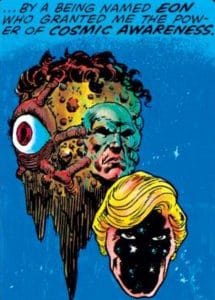 The Death of Captain Marvel reminded me of this. I had started reading it before the latest death, but in the story there is a profound sense of loss for the Marvel superhero world. Now, I am not certain that the character was ever as important as Starlin crafts him to be in this story but it plays well. The greatest science minds of the Marvel universe are working to heal him, unable to because of his Kree physiology and they are unable to turn to the Kree, as Mar-Vell is an outlaw to them, their cosmic hero Benedict Arnold.

There is a walk through of heroes, who come to Titan to say their goodbyes to him, some with grim resolve and some with unspeakable sadness that nothing more can be done. There is an especially touching moment when the Skrull Empire sends a representative to honor Mar-Vell with a medal, essentially declaring him the most difficult warrior they have ever faced. He is honored by all of them. 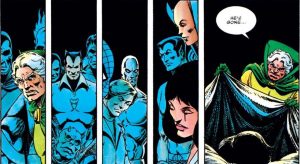 Grief works in different ways and one of the things you will see is people trying to control how others grieve. When Prince died, people wanted to disqualify some people as not having been a big enough fan. When Gene Wilder passed, people wanted to argue about who he really was. When David Bowie died, people scoffed at the idea that he really meant as much to people as they posted on their social media profiles. The internet created this “grief police” just to try and dictate how we really feel and whether or not we can say it. And it is wrong. While there is certainly something to be expected of quietly honoring people per their family’s wishes, there is also something powerful about sharing that grief in public.

So, mourn, weep, cry and share when we lose people whose work meant something to us. Art and its impact are part of what makes us human and grieving is as well.

Your RPG Character According to the DSM-5