Recap and Review of Agents of SHIELD Episode 218: Frenemy of My Enemy

After a plodding couple of episodes, are some of the plots going to come back together in Agents of SHIELD Episode 218: Frenemy of My Enemy? Will we start to see what is ahead as we move towards the season finale?

[divider]Recap of Agents of SHIELD Episode 218: Frenemy of My Enemy[/divider]

As the episode opens, we see Fitz give the slip to the SHIELD agents following him, making it safely into a cloaked Avengers quinjet on top of a parking lot where he is reunited with Coulson, Hunter and Deathlok.

Suddenly the focus has shifted back to HYDRA. And honestly, it feels like the inevitable way to bring Teams Coulson and Gonzalez together. But also see that HYDRA has the dead body of Ethan, an Inhuman we met briefly last episode.

At the Inhuman base, we learn that Jiaying is going to send Cal away from them, using Gordon to teleport him somewhere and leave him. This decision flusters Skye, especially after seeing the different side of him at the dinner they had as a family last episode. 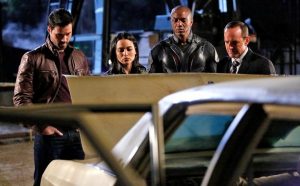 Eventually, Skye comes to Cal and wants to be with him on his trip before they leave him. During the day, she learns more about him, that her last name is Johnson, and she also sees the potential that could happen if his temper gets out of control. When they finally are visiting his office and storage, Skye decides to call in SHIELD because she doesn’t want Cal to hurt others or himself when he learns that they are abandoning him.

Meanwhile, Team Coulson has managed to track down Agent 33 and Ward. Coulson essentially gives Ward an ultimatum: He can help Coulson get back at HYDRA but at the end, Ward is going to get the Tahiti Protocol, wiping his memories. In a private moment with Agent 33, it seems to be that Ward isn’t 100% against the memory wipe and we are reminded that a part of what he is as a ruthless killer was what he was made to be. 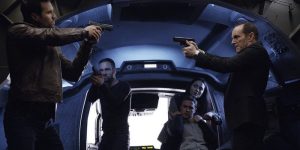 Ward signs up and shows Coulson Whitehall’s former #2, Bakshi, who is under Ward’s control. They decide to run a scam to get to the newest heads of HYDRA, using Bakshi.  That is working until Bakshi seemingly offers Deathlok as a piece of technology. Coulson and Ward then have a showdown that ends when Fitz points out that unless they intervene, Deathlok was about to take everyone out.  They decide to follow the HYDRA plane, which we learn has likely been following Gordon’s teleporting effects, which takes them to where Skye and her dad are.

At Team Gonzalez, we have a bit of an issue as Agent May turns in Simmons for her work alongside Fitz of swapping out the fake Fury’s Toolbox with the real one. Clearly, this shakes Simmon’s confidence in her and May’s relationship. But Simmons figures out that they can track Deathlok via some signals and is doing so when they get the call from Skye about her dad.  So the second SHIELD heads there as well.

What you wind up with is Skye, Cal and Lincoln, who had been trailing her, in a fight with Hydra agents, who are being hit by Coulson’s team and Team Gonzalez on the way. It creates some interesting interactions. Cal takes on a bunch of HYDRA guys, and Lincoln sends Skye to run away. Lincoln and Deathlok then have a showdown, where Lincoln’s electric powers don’t have the same effect on Deathlok. They are both intrigued but a HYDRA EMP grenade takes them both down.

Coulson, Hunter, Agent 33 and Ward are working the building. It is at that moment that Simmons has hacked Deathlok, so through Deathlok’s eyes it looks like Ward and Team Coulson are just one big happy family without any context. This clearly upsets Simmons and May. Hunter takes a bullet but is okay as Agent 33 has his back. Coulson and Ward are working hard as well, with Coulson clearly bothered with Ward’s ruthless tactics but Ward also calls him “boss” and is doing what he says.

This all culminates in a spot where HYDRA is about to capture Skye, but Gordon teleports in. As he is grabbing Skye against her will, Cal jumps along. Coulson is lamenting her disappearance again when Ward lays out the odds and talks about their need to leave.

And the last scene is a late arriving Mac and Morse team showing up to find Coulson there, willing to talk and wanting them to take him back to the 2nd SHIELD’s base.

Finally it feels like we are moving towards some resolutions but I also am bugged that it feels like they are simply re-inserting HYDRA as the big bad to move the story along. But all of the factions being around (Team Coulson, Team Gonzalez, HYDRA, the Inhumans and Cal) can make for some interesting last few episodes for this season.