Jason Aaron’s work on Thor is AMAZING but we need to talk about the GOAT. No, not Toothgrinder or Toothgnasher, I’m talking about Walter Simsonson, the Greatest Of All Time when it comes to Thor comics.

We’ve written about Walt Simonson’s run on The Mighty Thor before, but today we’re going to point you towards a podcast that would make a great supplement to your binge reading of Simonson’s work.

Thor Podcast: The Lightning and the Storm 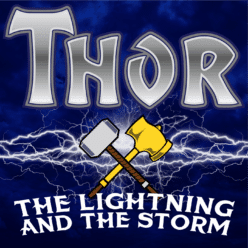 Miles Stokes (of Jay and Miles X-Plain the X-Men) and Elisabeth Allie (of Geek Craft Expo) join forces and offer insight and analysis of Walter Simonson’s The Mighty Thor and there is a lot to love about the podcast.

It works for veteran Thor fans as well as the newbs.  They don’t assume you know much of anything–despite Thor’s larger profile in the general population thanks to the MCU. So you’ll be treated to explanations of Mjolnir and Midgard (fairly basic) as well as actual Norse mythology and Korbinites (deeper dives).

The podcast is more than just a recap. This is great on two levels: 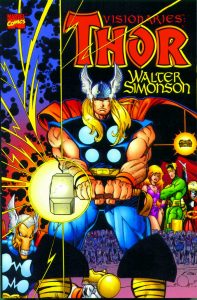 It is finished! There are 13 episodes that cover The Mighty Thor #337-382 plus a bonus episode featuring an interview with Walter Simonson himself.

You’ll never be further behind on the podcast than you are right now, and the 14 episodes are easily consumed (averaging a little less than 1.5 hours a pop). So bookmark it for later if you’d like! No rush to get current with this one. It will wait for you and it is worth the wait.

It is kid friendly! Unlike X-Plain, The Lightning and the Storm lacks the little red ‘E’ marking it as explicit. So regardless (had to throw that word in there in honor of Miles) of your age or tolerance for coarse language, its an easy listen. And I love this because it opens up the podcast for the younger audience that the movies themselves target. Grab the kiddos and expose them to the best Thor material out there!

There is a lot of enthusiasm and fun.  Anytime Thor came up in X-Plain, Miles would fanboy right the heck out, so it was only natural that during that podcast’s hiatus this summer he would take on Thor as a pet project and labor of love.

He and Allie laugh frequently (and both of them have infectious laughs!), have fun with onomatopoeia, and present awards for sound effects, fashion, and the Most Metal Moment each episode. They enjoy their time, the material, and each other from beginning to end and that makes this a downright lovable listen.

Why Wouldn’t You Tune In?

Seriously? If you love Thor, I can’t think of a reason why you’d pass on this Thor podcast. It covers the best Thor material out there and does so in a limited format. Win-win!

There’s no way in the realms you’re worthy of calling yourself a Thor fan if you’re not familiar with Simonson’s work. The Lightning and the Storm unpacks and opens up that epic and definitive run for fans both old and new, young and old in a totally consumable format and length. Subscribe today! Tell them Nerds on Earth sent you. It won’t get you or us anything, but still…

A Video Introduction to Marvel Legacy #1