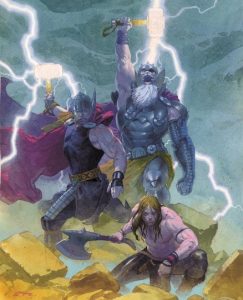 Nerds are doing a happy dance in anticipation for Thor Ragnarok. (Or Thor Fragglerock, as my wife calls it.) But what of the Thor comics?

Outside of the magnificent Walt Simonson run of Thor comics in the 80s, the Thor comics have never been better. Today’s Thor comics are written by the super talented Jason Aaron and they are A++ material.

Many Marvel fans only watch the movies, so it’s understandable that it may be confusing to try and find more Thor stories via comics. I’m here to help. What follows is a brief guide to the Jason Aaron Thor stories that, verily, will be a joyous find for burgeoning Thor fans.

A Brief Guide to the Current Thor Comics

First things first, Jason Aaron admitted to listening to Led Zeppelin’s immigrant song while writing the God Butcher, the first arc of his run, and by the gods, it reads like it. The current Thor comics are certainly metal in so many ways, but by Odin’s beard, they are some incredibly tender moments as well.

Thor: God of Thunder was launched in 2012 with a new #1 issue. It ran for 25 issues and it started with a head banger of a story that was universe spanning in scope while also juggling three alternative time traveling Thors in a way that wasn’t actually confusing.

The first arc is called The God Butcher and it leads Thor on a quest to track and eliminate a threat that is trying to murder the pantheon of gods across the entire universe. A Led Zeppelin soundtrack fits the story perfectly and the second arc brings the story to a really satisfying conclusion.

I’d be remiss if I didn’t mention issue #12, which takes Thor on a date. It also has an incredibly touching sequence with Jane Foster, one of Thor’s great loves. It is a well done issue.

At issue 13 of Thor: God of Thunder, Jason Aaron begins a story that features Malekith, the iconic dark elf villain of Thor lore. He does a masterful job of reestablishing Malekith and he’s a villain that carries through the majority of the run.

Issue #25 relates to a Jason Aaron penned crossover called Original Sin. As with all Marvel crossovers, it is difficult to recommend it due to the impossibilities of trying to track the story across the ridiculous number of tie-ins. But what you need to know is this: Thor received a whisper in his ear that informed him he was no longer considered worthy to wield Mjolnir, his enchanted hammer.

Thor was relaunched in 2014 with a new #1. No longer worthy to wield the hammer, a new Thor took up the mantle, one who was worthy. Commonly referred to as “Lady Thor”, this series ran only 8 issues before it was halted by Marvel’s Secret Wars crossover event.

While the mystery of who was worthy to take up the mantle in Thor has been largely spoiled on the internet, it is an EXCELLENT comic. I’ve written about it fully here, so I’ll simply point you there.

The Mighty Thor was relaunched in 2015 with a new #1. This picked the story of the new more worthy Thor back up and it continues into the present. Like most Marvel writers, Jason Aaron excels when he isn’t saddled with a crossover and can tell the story unimpeded. This is the case in The Mighty Thor.

The new Thor is integrated into the Marvel universe in great stories that go from facing off against Odin to very personal and human stories on Midgard (Earth). Despite being perhaps the freshest take on Thor in decades, The Mighty Thor also feels very much like OG Thor in tone, feel, and even via long time characters.

Of course, we’ll now forever picture Chris Helmsworth as the OG Odinson and he appears in The Mighty Thor as well. He’s on a quest to again prove himself worthy and it makes for good reading. This quest was eventually spun out into its own series: The Unworthy Thor.

The Unworthy Thor takes Odinson on a quest to find a mysterious second Mjolnir.

A Brief Guide to the Current Thor Comics

What all this adds up to is a catalog of Thor comics that places Jason Aaron among the very best Thor writers, perhaps even approaching the mythic Walt Simonson. Thor comics have never been better.

It can be confusing to jump into comics, but us nerds are all looking for the current Thor comics right now. Start with The God Butcher or better yet, simply slide right into Thor and the mystery of the new hero to take up the mantle. All are excellent. And all are available via Marvel Unlimited.