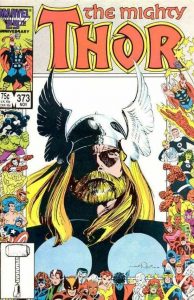 Imagine that you are a comic book creator in the era when the industry is really starting to boom and go in some magnificent directions. More stories than ever are being told and there is an immense amount of opportunity for you out there, especially since you are a dual threat: a great artist and writer.

So, when Marvel Comics comes to you and offers you a title, you are probably ecstatic. Until you look at it and see that the comic they want to give you is…Thor.

Thor has to be one of the harder comics in the Marvel universe to write. Sure, he is a powerful Avenger. But he also is wrapped up in all the Asgardian stuff and occasionally a very cosmic thing. And because he is so old in the comics (Asgardians live much longer evidently), there is this massive backstory.

Few people have been able to take on Thor and do anything substantial and significant with it over the long haul. But when it is done right, it is amazing and Walter Simonson’s run on Thor from the 1980s is one that is rightly held as one of the greatest runs in comics history.

Walter Simonson was new to Marvel Comics when he came over in the early 1980s, picking up Thor with #337 and ending at Thor #382, with most of that run being with him serving as both writer and artist.

Simonson’s run on Thor is rightly collected, both in trades but also in an amazing omnibus collection. And for good reason. Here are some of the reasons that this run in Thor is so amazing. 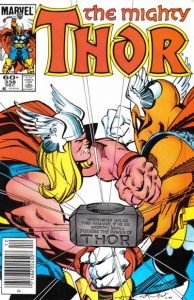 Simonson embraced the Norse mythology. The Norse nature of Thor can be problematic. As much as you may want to write Thor in the modern world, it is hard for him to carry that kind of story. He works excellent as a “fish out of water” character in a team situation, like we often see in the Avengers.

But Thor is at his best when his stories are deep into the Norse myth, battling alongside heroes like Balder the Brave, the Warriors Three and Lady Sif. His finest opponents are the trolls, demons, wizards and sorceresses that want to take over Asgard, usually at the behest of his brother Loki. Simonson embraces that full on but does it in such a way that you don’t have to have Norse Mythology degree to understand it.

But Simonson also went cosmic. Big time. When you think about this run, you realize that part of what Simonson realized is that Thor is a god! He should be traveling the universe and fighting colossal fights. In that run, Thor does that, balancing the worlds of Asgard, Earth and the cosmos.

And because of that, it allows the introduction of new characters like Beta Ray Bill, an alien who becomes the first person to wield Thor’s hammer other than Thor. (And it says a ton about how other creators think about Simonson when they recently had an arc where Beta Ray Bill had a human identity whose name was Simon Walters, not to mention Simonson appearing in the Thor: Dark World movie in a banquet scene.) 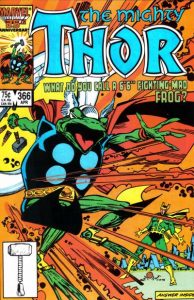 Simonson did phenomenal long arcs. It isn’t really clear if he knew he’d be on the book for a long run but he wrote like he would. Some things he introduced wouldn’t resolve themselves until 6-8 issues later. In doing so, he is able to build up things for the long haul, making threats seem massive because he took the time to build them up.

Thor grew as a character. Thor had long been built on the idea that there was a human character, most often Dr. Donald Blake, who would strike his walking stick and become mighty Thor. Simonson moved that model, turning Thor into who he was all the time, though taking on a separate identity.

And as a nod to fans who said that sounded really familiar, Thor knocks over a reporter who looks an awful lot like Clark Kent. Later, Thor grows some more as a character when he is cursed with being able to be injured but never die, allowing Thor to forge some sweet battle armor. And Simonson isn’t afraid to do things like introduce modern weapons into the story. (Asgardians with M-16s seems ridiculous in anyone’s hands but Simonson.)

The art is amazing. It is hard to describe how awesome Simonson is as an artist. His style is very unique. The way he will intertwine and link panels through things like sound effect wording is unique and distinctive. His style fits, as the costumes and epic-ness of an Asgard hero is shown in character designs, in some amazing coloring and amazing storytelling.

Because he is both writer and artist for a lot of this run, he brings an ability to tell a story both visually and in story. (The end of an arc features a story of Skurge the Executioner that made me cry manly, manly tears because of what is said and what isn’t said.)

If you are interested in Thor and want to know more, Simonson’s run is a great place to start. Sadly, his run is not available as part of the Marvel Unlimited apps but it can be found in trades and an omnibus.

Talk Nerdy to Me: 7 Valentine’s Day Options for Nerds