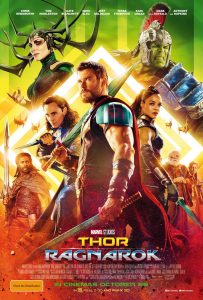 Though I personally really enjoyed Thor: Dark World, the vast majority of the comic loving, movie seeing public seemed to be caught off guard when there was an announcement for third Thor film set in the Marvel Cinematic Universe. It just didn’t seem like the most logical of next steps.

And with Thor off the grid for Captain America: Civil War, what exactly was going on with Thor and his quest. The answer is found in Thor Ragnarok, the latest Marvel cinematic masterpiece.

Ever since the preview, we knew that this film was going to be an interesting transition in tone. The director that Marvel engaged, Taika Waititi, was mainly known for some independent films that became critical darlings, like What We Do in the Shadows and Hunt for the Wilderpeople.

But Marvel has learned to take some chances on directors, with it most notably paying off in James Gunn’s Guardians of the Galaxy movies. And what Waititi has managed to do is create a much different movie in tone that finds a perfect place in the new Marvel Cinematic Universe.

For hardcore comic nerds, Thor: Ragnarok is an homage to some of the best Thor stories of the last 30 years AND he manages to paint on the edges with some excellent other stories, most notably the World War Hulk story.

By the time the story is over, the film has managed to take a deep dive into the Thor lore, do a significant set-up for the next story in the Thor story and the Marvel story, as it clearly seems to be suggesting Avengers Infinity War arriving. 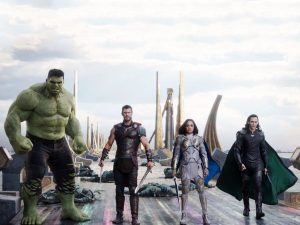 Casting in a sequel seems like a lay-up for most of these Marvel movies, but this one had some challenges. The main gang are all back:

But they also have done excellent work in new faces. Cate Blanchett is amazing as the new major villain, Hela, evoking the best combination of alluring and evil. Jeff Goldblum nearly steals the show as a character named the Grandmaster. Karl Urban in limited screen time does great work with the character Skurge. The director himself takes a turn as a CGI character, Korg.

But the best addition to me is Tessa Thompson, as the Valkyrie, a defender of Asgard who has tragically lost her way.

With all of those cast additions, it is amazing to realize that the film tells a story that is easy to track, understandable and has some incredible twists. If I had one criticism it is just that Waititi seemed to want to hand wave away the characters that he didn’t want to do much with. The Warriors 3 all meet quick death. Lady Sif, from the previous movies, is nowhere to be seen. For the movie to be very Asgardian focused, they did away with a lot of the Asgardians pretty quickly. But, if I am honest, it doesn’t distract from the stories.

The humor that has been added tonally moves the film closer to the Guardians mold. There are several excellent jokes and laughs that play out well. The few that are revealed in the trailer are not all of them. There are humorous brotherly interactions between Loki and Thor that are classic. There are laughs that come at the expense of the tropes of the genre; after one tremendous heroic speech, there is a laugh that I would have paused the movie to recover from if I could. And the humor lightens up the story, which otherwise is pretty bleak.

It is a personal story but also one with major ramifications. And, the end of the film has an unexpected change to how the battle is “won” that is both brave and challenging. Viewers will leave challenged by it but also anticipating what may exist in Thor 4, which is certainly not what anyone expected.

Thor: Ragnarok gets the rare 10 out 10 Nerds, because even the minor nits are so minor that they don’t matter as much as the excellent, compelling story that the cast and director have told in this amazing film.

Recap and Review of Loki, Episode 6: “For All Time. Always.”

Recap and Review of Loki, Episode 5: “Journey into Mystery”

Recap and Review of Loki, Episode 4: “The Nexus Event”

Recap and Review of Loki, Episode 6: “For All Time.…

Recap and Review of Loki, Episode 5: “Journey into…

Recap and Review of Loki, Episode 4: “The Nexus…