Thor and his mighty hammer Mjolnir have been reoccurring topics of discussion amongst Nerds on Earth of late, despite none of us having visited Asgard.

We’ve reviewed Walter Simonson’s Thor run, which is widely considered to be one of the best runs in all of comics. And we’ve surveyed heroes in the Marvel Universe who proved themselves worthy of wielding Thor’s legendary hammer.

However, there is a character who has wielded Thor’s hammer that you may not have thought of:  Deadpool.

There are few in the Marvel U that are less worthy of wielding Mjolnir than the Merc with a Mouth. He’s base, debauched, foul mouthed, and murderous. The likelihood that his fingers are slick with grease from chimichangas alone should preclude him from lifting Mjolnir. And yet in Deadpool #37 (2000), we get Thorpool. 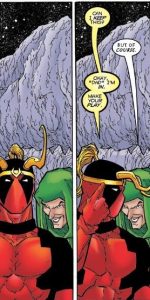 In the issue, Loki convinces Deadpool that he’s his father and enlists Deadpool’s help in shaming Thor, his “uncle”, for denying their (Loki and Deadpool’s) rightful place in the realm. Deadpool plays along, but mostly to save his love interest, Death, and because he’s promised he can keep Loki’s sweet headgear.

So when Deadpool spotted Mjolnir lying in the rubble of the building he blew up in order to cause Thor to lose sight of it, he leapt at the opportunity and took on the powers of the god of thunder; complete with flight, Asgardian clothes, and even the Old English speech.

What does he do with his newfound powers? First he spies on a topless woman who has just finished with her shower, then he visits Taco Bell, the local fair, Yankee Stadium, and Neverland Ranch (click here for that panel) before dropping in on the Avengers and attempting to fit in amongst their ranks as the new Thor.

There he runs into Donald Blake (Thor’s mortal alter-ego) who wrests Mjolnir away from Deadpool but finds it to be faulty. Loki then whisks them both away and sicks Death upon Thor to remove him from the picture permanently.

Deadpool, upset at Death’s sudden attraction to Thor/Blake (which Loki explains is due to Deadpool’s new worthiness – a trait Death doesn’t care for), tosses Mjolnir to Thor in order to restore his own depravity and win back Death’s attraction…but the hammer still has no effect on Thor. 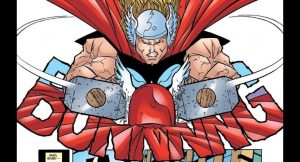 The duo return to earth and discover that Loki had turned the real Mjolnir invisible, exposing Deadpool’s hammer and powers as forgeries.  Thor transforms then threatens to smite Death.  Deadpool takes offense and goes on the attack only to have his head sandwiched between both Mjolnirs.

Thorpool: So What Did We Learn?

Deadpool is unworthy after all!  I mean, come on…the flight, the clothes, the speech mannerisms – they do not a Thor make. The very first things he does when he believes himself to be the god of thunder prove his unworthiness beyond the shadow of a doubt.

So while Deadpool shows up on many of the lists enumerating who besides Thor has wielded Mjolnir (even Marvel.com’s, though it has a telling question mark beside his name), he never actually has.

It was all just another ruse of the trickster god Loki…

Dungeons and Dragons: 7 Gnarly Weapons From History You Need to Add to Your D&D Game

Recap and Review of Loki, Episode 6: “For All Time. Always.”

Recap and Review of Loki, Episode 5: “Journey into Mystery”

Recap and Review of Loki, Episode 4: “The Nexus Event”