Let’s be honest, this was the best scene from Avengers: Age of Ultron:

(Followed closely by this clip.) 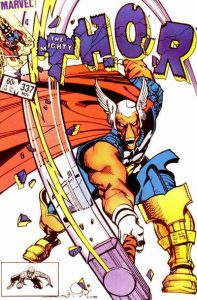 When you slap a horsey head on a cosmic Bill, you get yourself someone who is worthy of Mjolnir.

Indeed, Beta Ray Bill might be the most iconic example of an interloper who has wielded Thor’s hammer. This is mainly due to the deft touch of Walter Simonson who in his iconic run on Thor could take the goofy cosmic of a comic like Thor and make it cool.

And because he is indeed cool, a few words about Beta Ray Bill. Bill was the genetically modified protector of his race, the Korbinites. Misunderstanding the intentions of one another, Thor and Beta Ray threw down, the result of which was Thor being knocked unconscious.

When the unconscious Thor relapsed into his alter ego of Dr. Donald Blake, Bill picked up Blake’s walking stick only to realize he was now wielding Mjolnir!

Beta Ray Bill had proven himself worthy, but instead of keeping Mjolnir, he returned it. In its stead, Odin forged a second enchanted hammer named Stormbreaker, giving that one to Bill. Thor got Mjolnir, Bill got Stormbreaker, and both got a new friend and ally. 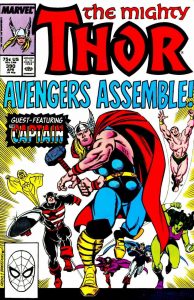 If any human is worthy of lifting Mjolnir, it has to be Cap. Indeed, Steve Rogers has handled Mjolnir on two occasions.

As is true of most good things in comics, the first time happened in the 80s. Captain America was operating independently under the moniker “The Captain.” While Thor was being beaten down by Grog and the Demons of Death, The Captain was able to lift Mjolnir in order to get the hammer back to Thor to save the day.

The second time Steve Rogers lifted Mjolnir was much more recently. In the Fear Itself crossover event of 2011, Thor was fighting his uncle high above the earth. Meanwhile, Captain America had his shield shattered and was forced to wield conventional weaponry.

But when Thor lost his grip on Mjolnir and it crashed to earth, Cap was able to lift it and lead a renewed charge against evil doers doing evil.

Click here to see if you personally identify with Captain America. 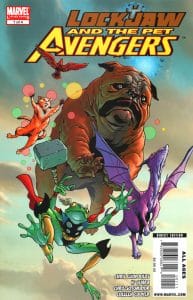 It’s hard to overstate the skill at which Walter Simonsson handled Thor. He could take bizarre, outlandish moments, yet make them entirely believable and welcome.

One of those moments was when Thor was turned into a frog by his tricky trickster brother, Loki. Thor being a frog didn’t stick, obviously, but it opened the door the the idea of a “Frog of Thunder.”

Throg is a wholly independent Thunder Frog that had his origin as “Simon Walterson”, and with the same noble heart as Thor. Walterson was transformed into a frog named Puddlegulp during Simonson’s run, where he teamed with Thor to battle evil rats. Bizarre, yet somehow it worked.

Puddlegulp made a triumphant return decades later in Lockjaw and the Pet Avengers. The story goes that Thor accidentally had left behind a broken sliver of Mjolnir. When Puddlegulp lifted this sliver he transformed into Throg, Frog of Thunder. And bad guys croaked. 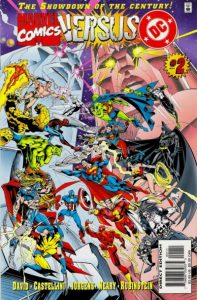 Marvel vs. DC showcased the big battles between heroes that fans had always speculated about. The winners of the battles were even decided by fans. It wasn’t a story as much as a precursor to the Facebook polls we suffer through today.

But that doesn’t mean that Mjolnir didn’t make an appearance, even if Thor didn’t directly battle Wonder Woman in the series.

Here’s how the battle royale went down:

There have been others who have lifted Thor’s hammer. Some were the result of Loki’s trickery: see Thorpool, where we remember the time that tricksy time when Deadpool served as God of Thunder.

Other times it was hard to prove the worthiness of the wielder of the hammer like the time when Thor was technically holding the hammer but the Hulk grabbed it as well and slung Thor to and fro. So was Hulk worthy or was he basically just moving Thor around?

Then there have been exploits of loopholes as well, like when Andy the Android and Air Walker, two beings with questionable sentience may have found a quirky robot clause to allow them to wield Mjolnir.

But the list of four individuals above above represents the truest intentions about who has wielded Thor’s hammer: those who are worthy through harboring a heroic heart and act with the noblest of intentions. By that measure, may we all be the type of people who are able to wield Thor’s hammer.