I have to admit a sort of bias when it comes to pitching Taskmaster.  Unlike Moon Knight, he was not a character I had missed out on.  Instead, Tasky is a character I constantly want more of.

Truth be told, I think his ability is one of the coolest in the Marvel Universe: photographic reflexes.  In a nutshell, what Taskmaster can see, he can do.  He is able to instantly and perfectly replicate any action he sees performed; whether he sees it in person or via video.

The Hood goes so far as to call Taskmaster “the cover band of super villains,” which is both true and hilarious.  And Taskmaster himself has a pretty reliable sense of humor, too.

His photographic memory makes him one heck of a formidable opponent for two reasons:

1) He’s an instant (as opposed to even a “quick”) study.  He doesn’t even need to have fought you before in order to have studied your moves and have the ability to replicate and anticipate anything you can throw at him.

2) Even if you do drop in on him as someone he has not previously studied, you only have one chance to best him, so you better make it quick and effective.  In the Unthinkable run from 2010, a villain named (and I swear that A) I’m not making this up, and B) this guy is ridiculed by peers in this run for his name) Redshirt the Über Henchman brings some previously unseen Shi’ar fighting style to Taskmaster and still ends up dead inside of four pages – that death coming by Taskmaster’s application of one of Redshirt’s own secret Shi’ar moves.

(The only person Taskmaster’s ability doesn’t seem to work on is Deadpool, who gives him trouble because of the sheer madness and unpredictability of Deadpool’s fighting styles.)

What I love, too, is how some artists show the reader who Taskmaster is mimicking at any moment in a fight.  In Unthinkable, Jefte Palo does so with overlaid, sepia-colored squares to great effect.  In Taskmaster’s 2002 mini series, the artists went for a white-washed character swap mid-motion.  Both styles are very cool. 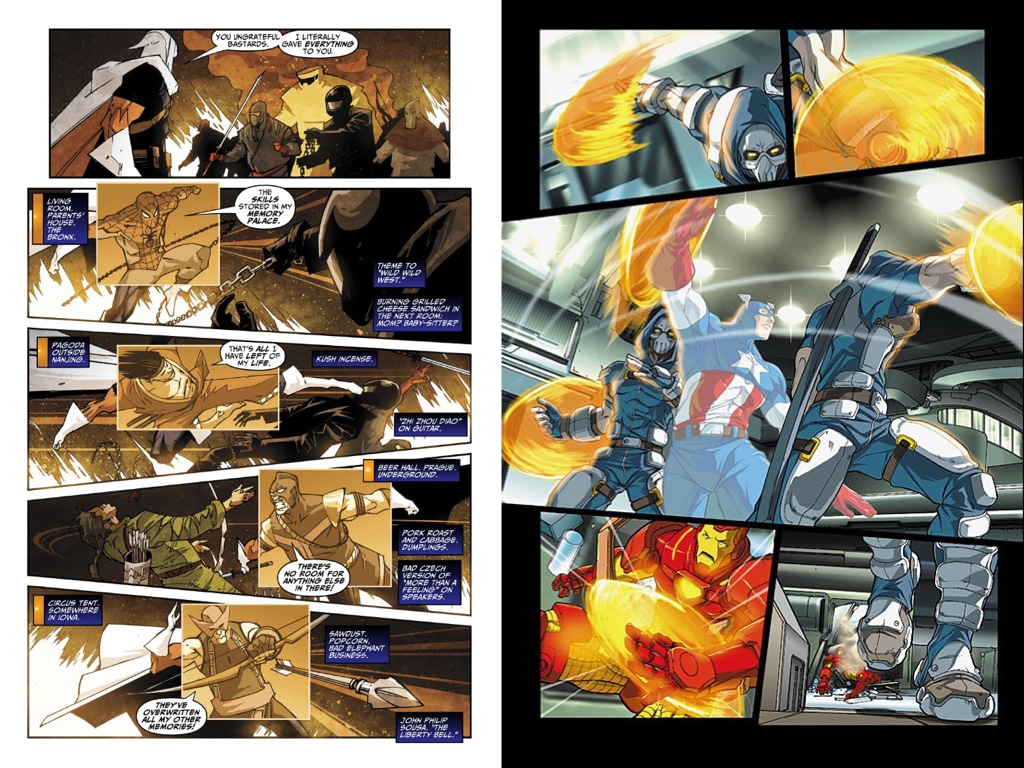 Much to my dismay, Taskmaster’s footprint in the Marvel Unlimited app is relatively small.  I had not yet read Avengers: The Initiative and was pleased to see him as an instructor for the new recruits.  Him as a teacher makes so much sense, too.  No one in the Marvel Universe stands to teach anyone as much as Taskmaster can.  In fact, that’s how he gets by: He trains the henchman of whatever organization has the deepest pockets.

The 2002 mini series is missing completely from the library, and sadly only two of the four issues that comprise Unthinkable are currently available.  But when it comes to Taskmaster, you have to read Fred Van Lente’s Unthinkable run.  Period.

Unthinkable is the definitive Taskmaster run for a couple of reasons:

It’s an origin story.  Without spoiling anything, Taskmaster came across his ability in much the same way that Captain America received his: By injection.  A cocktail bursting at the seams with enhanced cortisol which is associated with procedural memory (or the ability to perform tasks).  The four-issue arc also shows how he moves from SHIELD agent to one of the most-wanted criminals in the world.

Taskmaster owns in this run.  The dude is not to be taken lightly, and his adversaries understand that completely.  In the first few pages of the first issue, Taskmaster finds out that a humongous bounty has been placed on his head, and that no fewer than seven organizations (all trained by him, of course) are looking to cash in.  Tasky doesn’t sweat it.  He takes them to school…again. 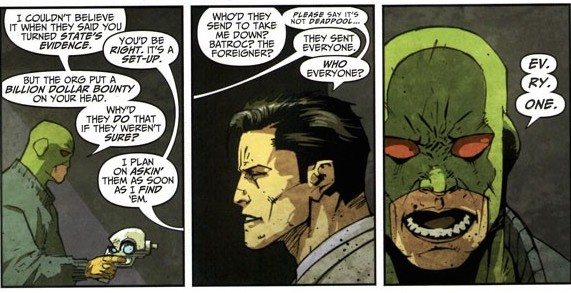 Its emotional.  I can’t and won’t give away much here, but its revealed that for every ability he learns, it costs him a memory.  Van Lente does an absolutely beautiful and heart-breaking job of exploring just what that means for Taskmaster.  It plays a major role in his affiliations (good guy or bad guy?) and his life beyond the mask.

Unthinkable gets 7 out of 8 nerds.  So well done, and its much, much more than something pretty to look at.

We’ve already looked at Moon Knight, and the next Comic Character You Should Know will be Penance, so stay tuned for more diamonds in the rough!

Agents of SHIELD S2E7 Review: The Writing on the Wall