Agents of SHIELD S2E7 Review: The Writing on the Wall

It’s time for our review of Marvel’s Agents of SHIELD. This week’s episode is The Writing on the Wall. 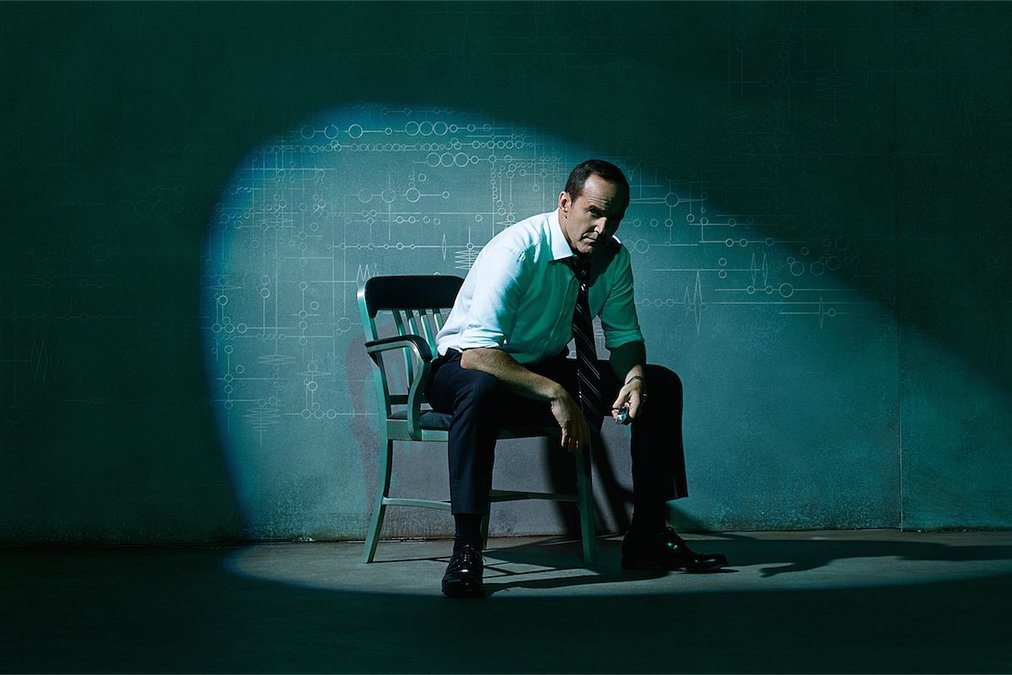 This week’s episode of Agents of SHIELD: The Writing on the Wall (s2e7) opens on a little wining and dining scene and where the tattoo guy from the last episode takes off his shirt, horrifying a woman who clearly recognizes the map, as he takes out a knife to “Help her remember.”  (Yet another case for not taking home the random dude you meet in a bar!)

Agent Coulson is working over the wall to his jazz records, when Skye interrupts him as he has carved up the wall,  busting his knife blade.  Coulson talks about how the visions are coming fast and furious and he can’t turn them off, while Skye talks about how she can’t match the drawings to anything. And Agent May is gone, a part of a manhunt for the now escaped Agent Ward.

Agent May is flying around in a Quinjet while Agent Morse is talking about the resources they have on the ground looking for Coulson.  Agent Tripplet then reports that he has a clear shot, as we see Ward pick up a suitcase full of the cash, passports, etc. that you would expect an international superagent to have.  Director Coulson doesn’t give the kill order, as  Ward’s brother the Senator wants him alive.  Ward recognizes that they have him, threatens to blow up a building with a C4 bomb that he makes sure Tripplet knows he has.

Skye then tells Coulson that a crime scene junkie has sent her pictures of the lady marked up with the markings. (I am a little scared of the chatrooms that Skye hangs out in.)  Coulson recognizes her not as an art teacher, but as a SHIELD agent.  So Coulson and Skye take a road trip to the crime scene when Coulson stumbles into a massive amount of the drawings, much to the dismay of an incredulous Skye.  And there are many pieces of art, all signed with the marker “A Magical Place.”

Coulson and Skye then lay out the pieces and discover that she has been working on the same design he has, as well as some added pieces that were missing.  Skye then discovers that Coulson is correct, and the dead woman is Agent Becca Stevens, who allegedly died 5 years ago from cancer.  Fitz and Mac have seized the body, while Simmons begins an autopsy.

Meanwhile, the agents are still tracking Ward as he ventures outside an Atlanta area stop where he hops a bus, taking a seat beside Agent Morse.  They do some mild flirting before Ward calls her bluff, showing her his dead man’s trigger on his arm before getting off the bus.  Ward then hops a bus to Boston, where Agent Hunter is waiting for him in a ridiculous cowboy hat, that would clearly give him away in real life.

Simmons then gives a debrief on the autopsy, including the fact that she has GH 325 in her blood as did her attacker.  Simmons then points out that she has seen Garrett’s previous carvings as well as the fact that Skye and Coulson also have the same thing running through their blood.  The team then realizes that they need to find all the visitors to “Tahiti”.

Coulson is at a loss, so he recommends torturing himself to get the necessary information that they need.  They have a debate about the whole process before Coulson reminds everyone that he is the director.  Mac, Skye, Fitz and Simmons are all there when Coulson has flashbacks, searching his memories for information on Agent Stevens, who then shows up, giving him a debrief, where they discover that she was a volunteer, looking to escape cancer.

Ripped from Coulson’s hidden memories is the fact that there is a litany of 6 patients, all seemingly well adjusted before one grabs the marker and starts writing. What follows is a litany of 6 very distressed and delusional patients, complete with a sensational amount of drooling…except for one.  Coulson then recommends canceling the patients, even wanting to do away with the host, the big blue aliens from previous episodes.  The experiments are then done to wipe out the memories, and then release them out into the open.  Coulson, under extreme duress, starts to recall the names of the people who were wiped.

Ward is then in a favorite old bar, ordering a drink, with Agent Hunter on his tail when a bunch of guys in suits show up.  Hydra is there answering his call.  He wants to meet with the head on the US, Director Whitehall, so that he can make a meeting with Coulson happen.

Director Coulson is still deep in the search, recognizing the bad guy, who is writing all over his arms before Coulson makes the call to wipe him and his memories.  He is drug out in Coulson’s memories when Skye pulls him out and Coulson goes crazy, before the team decides to lock him up.  Coulson remembers the name and the one person left who could be.  Coulson then tricks Skye, putting her in Ward’s old cell before heading out to find the murderer and the next potential victim.

Mack and Fitz are playing some video games and talking over Coulson’s memories being erased, alluding to Fitz’s own mental issues before Simmons discovers that Skye is captured.

Ward is still in the bar and the team plans a takedown, while Coulson pulls a gun on the last victim before getting knocked out by the crazy guy.  The team discovers the Hydra doctor captured in the bar, as Coulson comes to as the psycho GH 325 guy begins to threaten him, as the crazy guy points out what Coulson had ordered to happen to him.  Psycho HG 325 pointed out that pain made him remember, as he demonstrates his tattoos.  Coulson and he then talk about how neither of them know that the answer is, as Coulson figures out that the last innocent guy has made the drawings in a 3 dimensonial model.  The innocent guy breaks free, frees Coulson, and runs for freedom with his family.  Skye and Mack enter the scene  as Coulson chokes Crazy Guy until he realizes that the missing piece of the blueprint is in front of them and it is a blueprint to a city.

Coulson then commends the surviving guy, giving him a 2nd chance. Coulson then appears to be normal, the compulsions having disappeared once they understood it was a map.  The captured gift from Ward is in lockdown and Coulson gives everyone a “I’m okay.  No really, I am.” speech.

Hydra and Shield are looking for the same city and that should set their course for the next bit. 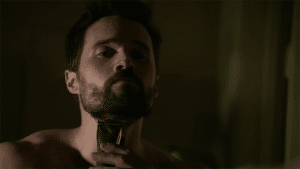 We then get Ward shaving to some soul record, as Skye looks through the phone and gets an incoming call from Ward on the bad guy’s phone.  Ward says that he will be sending Coulson presents from time to time and that he isn’t a fan of the new recruits.

Then he tosses a paper with a picture of his brother in a bag.

Okay, I have to say, this episode gets a 4 nerds out of 8.  In part because it just felt like the writers got bored and suddenly wanted to wrap up a bunch of storylines in one fell swoop.  A shift certainly isn’t terrible but it was so abrupt and dramatic here that it just wasn’t the best episode.

Here are some of the issues:

That said, they have set up some things for future episodes: