There have long been comic titles and characters that have always piqued my curiosity but not quite so much that I was willing to grab them off the shelves of my local comic shop.

I often missed getting in on the ground floor of new runs and I’m not much for jumping in midstream (curse my Type A personality), but since investing in the Marvel Unlimited app, both of those hang ups are somewhat a thing of the past.

One character I decided to look into was Moon Knight.

At a glance, Moon Knight struck me as Marvel’s attempt at a Batman, and he kinda is…but kinda isnt.  I mean, he’s rich, has just as many moon-things as Bats has bat-things, wears a cowl, has a sidekick menagerie…but that is where the parallels cease.

For instance, Moon Knight would just as readily take a punch, whereas Batman’s ninja training leads him to dodge. This trait of Moon Knight’s – to relish taking a punch – even drives Taskmaster to regret his photo-reflexive memory of Moon Knight’s fighting style. 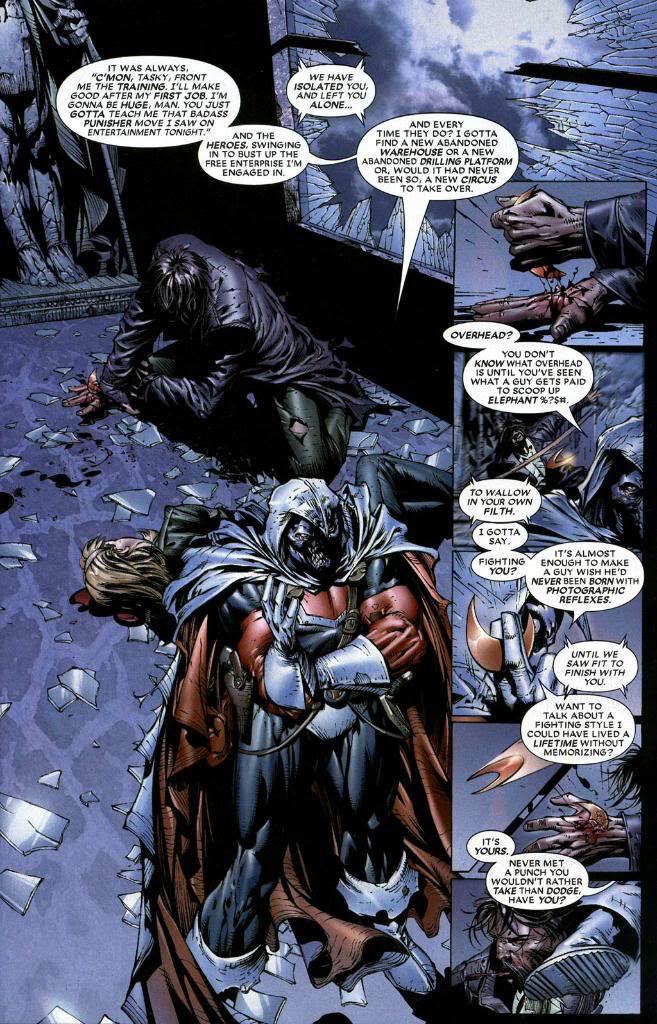 I picked up the 2006 series which apparently takes place after some rather significant event as Moon Knight is estranged from his god, Konshu, whom he spills blood for in return for power.  Every bit of what I read has Spector (as in Marc, Moon Knight’s altar ego) learning to do this super hero thing sans-powers while dealing with the incessant pestering of Konshu who continues to call for sacrifices.  It’s very Iron Man 3 in the sense that he’s figuring out if Konshu (his power source) made him the hero, or if being a hero is something he has inside of himself.

The 2006-2009 run is okay, but the run you should definitely give a read is Bendis’s twenty-issue run from 2010-2012.  It’s among the best Moon Knight material available in the Marvel Unlimited app, and that will come as no surprise to people familiar with Brian Michael Bendis.

Two things really set this run off in my opinion:

1)  Marc Spector suffers from multiple personality disorder and schizophrenia, and Bendis casts A-List Avengers as his many consciouses:  Captain America serves as his lawful good, Spider-Man (complete with quick wit) speaks from neutral good, and Wolverine plays the part of the chaotic good.  The multiple personalities clash in any given scenario and it’s up to Spector to resolve the voices into action.  Very, very cool device used to fantastic effect. 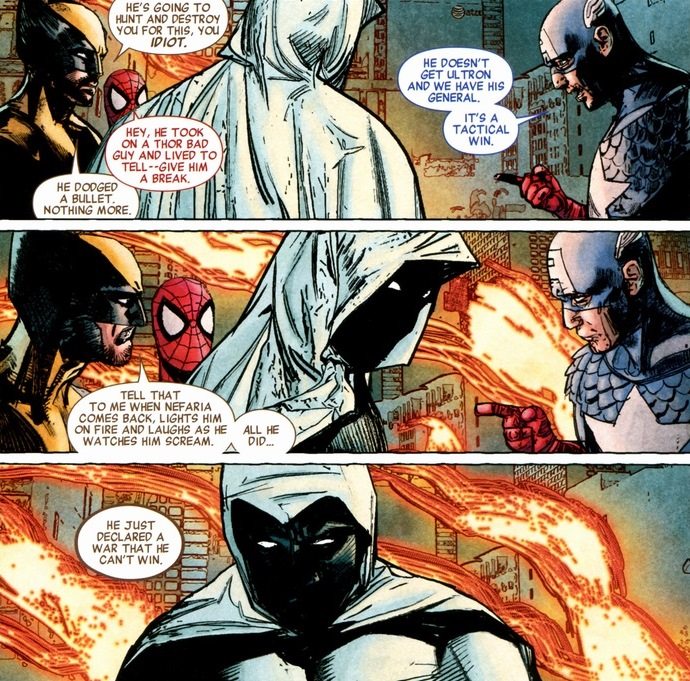 2)  Moon Knight evolves so much in these twenty issues, and its done with a slow-fade rather than very abruptly.  Just when he thinks he’s got both feet placed on the high road of a true hero, he’s tested in a big way.  Does he return to eye-for-an-eye retributive justice, or does he keep from sinking to the levels of his enemies and speaking the only language they seem to know: violence and death?

This story arc is definitely a recommended read.  Will you get the totality of Moon Knight?  No, but you will get some of his best stories.  You’ll see his crazy, his darkness, and ultimately I think you’ll see his redemption and establishment.

Queue this Moon Knight series up in the app or hunt it down as singles or trades and give it a shot.  It’s not a story that many outside of Moon Knight’s existing fan base may be familiar with, and that’s a shame given its quality of art and story.