It’s time to review Gotham, but with our nerdy little twist (All episodes here: 1, 2, 3, 4). Us Nerds on Earth writers will often banter back and forth via email, giving our first thoughts about the latest comic TV show we’re watching. It’s our hope that amidst our back-and-forth exchange that you end up getting a good review of the episode, even if the style is a little quirkier than what you’ll find from a traditional review. 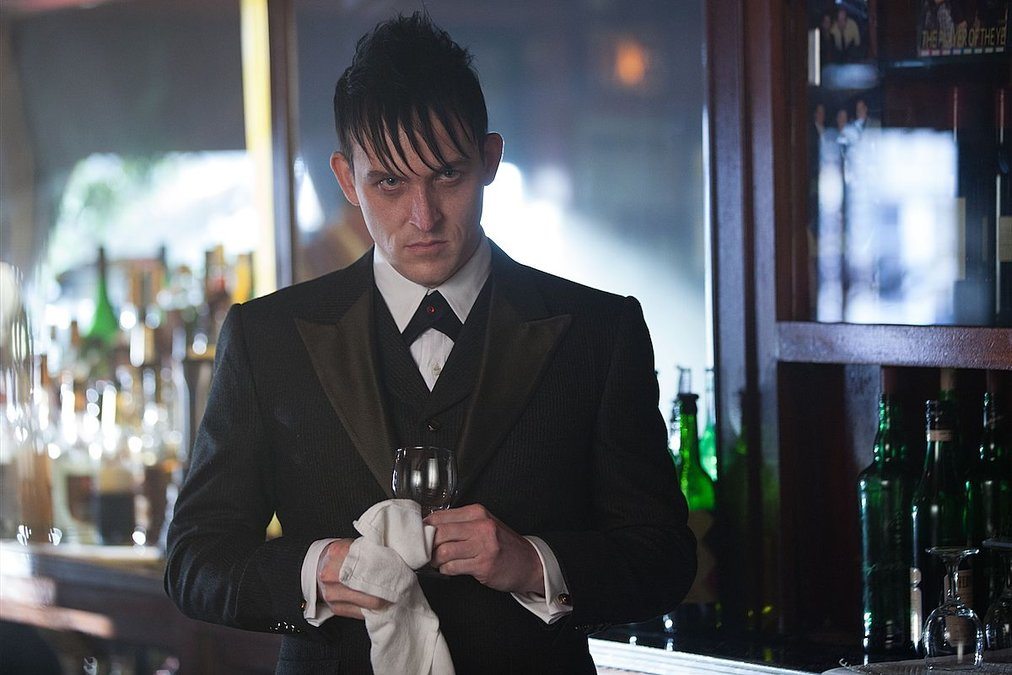 Milk and cookies for everyone. We need to keep our calcium levels high because there is a new drug on the streets of Gotham: Viper.

We’re now 5 episodes into Gotham and I have to admit that I was bored for the 2nd episode in a row, despite the strong start of the series for me.

I’m sorry! I jumped right into Negative Nancy mode! My apologies. How are you? Tell me how wrong I am about this episode.
Clave

Clave,
Okay, so here is why I agree with you: They are dangling too many plots at the same time. To me, the villain of the week idea works if you make that the focus.

But in just the first segment we see:

But seriously, too many pieces. They need to slim it down and focus it. Part of what I think happened? They saw how good the Penguin was on screen and crammed his stuff into existing scripts. (Think about it: We’d get the whole gang war thing just from the perspective of Fish and her crew.)
Jason

How did they miss that? Egregious oversight. On a serious note, I did like that the episode showed Alfred sitting down to help young Bruce in his budding detective endeavors.

That coupled with Alfred’s quick reaction in throwing a jacket over Bruce’s face to shield him from the viper vapor was a welcome development. I like this. They are finally showing the usefulness of Alfred. Rather than just showing the jarring emotion from previous episodes, they are beginning to flesh out why Alfred has always been such a critical part of the world of Batman.

I’m confident Alfred knows the secret of connecting the dots with yarn.

Related, it was a bold move to set up Wayne Industries as the “Big Bad” of the series, if indeed that is what they are looking to do in teasing the corruption. Wayne Industries’ board is dirty, that’s clear. But how much did Bruce’s parents know? I can live with a weak villain of the week (occasionally!) if they do a good job of setting up the Big Bad, which will require delicacy as they also have the gang war angle to juggle.

One more thing, then I leave it to you to give the last word. Man, that was a dumb move by Penguin to play his entire hand with Maroni so early and so thoughtlessly. Based upon that move, he really is lucky he hasn’t been capped. I need more of the Holy Canoli Penguin from last episode and less of the lucky ducky Penguin we got this week.

I lied, one more thing. Looks like we are finally seeing what Fish Mooney’s weapon is. Granted, I’m not nearly as attractive as she is by a moonshot, but I still thought it was awfully easy for her to sucker Francone simply by humming a few bars of a tune.

Okay, some of the positives of the episode:

I do like the building conspiracy of Wayne Enterprises being corrupt and Bruce Wayne and Alfred Pennyworth, Forensic Accountants, being on the case. (“So when did you know you were going to become Batman?”
“Well, I was looking over some spreadsheets and then…”)

The drug was inventive and it opened the door to more things to come. It basically is setting up the arrival of Bane, which could be a good or a bad thing depending. (His back story is his strength comes from a drug he keeps pumped into his system. At least, that is in the comics.) But they missed a chance to make it look like this.

But they need to hurry up and end this gang war saga. Mainly because it is the least interesting piece. At this point, the only parts that intrigue me are seeing how Penguin survives and the release of Fish’s “weapon”. (And while it was clearly a dumb move, I understand the Penguin’s misstep. It served a little bit that he is still a JV bad guy right now.)

They can end it well, and you get Gordon and Harvey pulling in the same direction moving forward, which works better, as we have seen the last few episodes. And shift to the investigation of Wayne Enterprises, because you know Gordon isn’t going to let it end with that empty warehouse, especially if they put it in any way towards the shooting of Bruce’s parents.

But if it drags on and on, it could get super boring.
Jason

Agents of SHIELD S2E5 Review: A Hen in the Wolfhouse