We’re going to try a new post series today. Us Nerds on Earth writers will often banter back and forth via email, giving our first thoughts about the latest comic TV show we’re watching. It’s our version of Mystery Science Theater and our hope amidst our back-and-forth is that you end up getting a good review of the episode, even if the style is slightly off center. 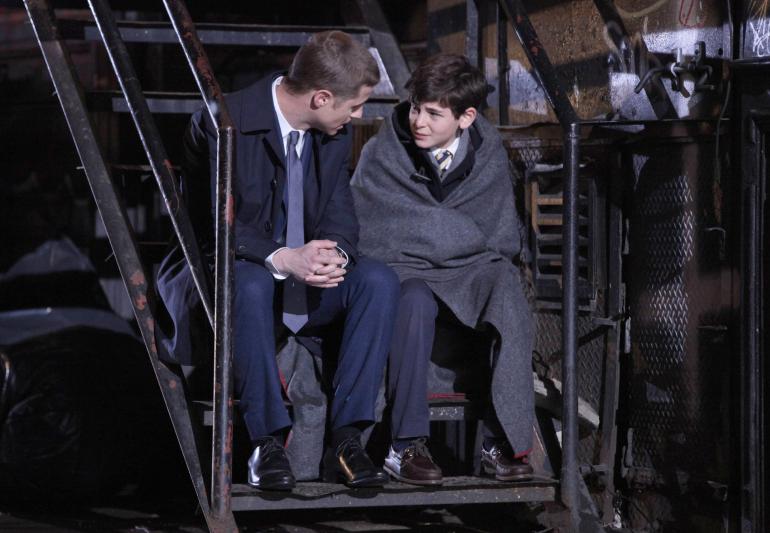 Jason,
Whoa, just got finished watching the opening of the pilot episode of Gotham. I’m not going to lie…I kinda need a hug right now.

From the opening scenes of cat burglary on rooftops to the murders of the Waynes, they quickly set up Gotham City as the dark, gritty, violent place we’d recognize from the Batman comics.

Cut to Jim Gordon comforting a young, shaken Bruce Wayne by telling him ‘that no matter how dark it becomes, there will always be light.’ That was a moving scene, but I don’t know that I was buying it. Grim, man, Grim.

While I’m on the subject, that’s the tone of Arrow as well. What’s with DC and the dark, shadowy soul? Marvel’s Agents of SHIELD can get heavy, but could just as often be a fun little romp. If they even attempted a joke or a move toward levity in Gotham, I missed it.

The first 10 minutes of Gotham got me in a depressed head space. I’m going to bounce the conversation to you: What you got that will cheer me up?
Clave

Man, if the rumor “no jokes in DC movies” thing is true, then this show lives right into that mantra! It is a dark place and it is just supposed to be setting up what we all know is coming: The Dark Knight. Which makes writing a show like this a challenge, because there is an endgame coming that we all know but can the ride between there and here be interesting? We shall see.

They certainly wanted to set up as many villains as possible in this premiere. I count Catwoman, the Riddler and Penguin as all making obvious and direct appearances. (No chance that stand up comic is the Joker. That is just a bad head fake meant to throw us off.)

I love Donal Logue but man, his character isn’t going to be one to like so far. A gritty, corrupted cop that just serves as a foil to Ben McKenzie’s James Gordon? I hope that we don’t see what is obvious: Gordon slowly becoming corrupt and that they will tell the harder story of the slow redemption of Detective Harvey Bullock. That would show that there will be light!
Jason

Whoa, Holy Story Arc there Batman. Interesting thought about the slow corruption of Gordon and the redemption of Harvey.

Here’s my bias – and all apologies to Adkins, who is an acknowledged lover of the anti-hero – but I’m really over the anti-hero. I’m at a point where I’m rooting rooting for my heroes to actually be, you know, heroes.

All that to say, I’m hoping that the arc of the show has Gordon keeping that strong core of integrity that this pilot episode set him up to have. The pilot episode even implied that Barbara was attracted to Gordon for his sense of honesty and integrity. Who knows how it shakes out, but I’m rooting for the guy, while I secretly hope that Gordon and I can be friends. We all need a few more upright individuals in our social circles.

Enough of that…I hear you on the rogues gallery! I’m loving all the villainous introductions. I’m a hard-core Marvel guy, but even I was pretty excited for Riddler and Catwoman crouching and lurking on every rooftop in Gotham City. They are really teasing nicely what’s coming.

One questions though? Did the episode really end with the Penguin turning to emotional eating? I know things were rough, but did he really need to slice a fisherman’s throat to take his sandwich?

Back to you for some closing thoughts,
Clave

Clave,
I know that when I am fake shot and swim the Gotham Bay, my first instinct is to eat someone else’s turkey sandwich.  That was far and away the oddest moment of the series opener.  I mean, one of the struggles of this genre is being so married to the source material that you have to do weird stuff to make Penguin fat.  I totally agree with the weirdness of that.  Should have just left it alone.

Here is one of my major concerns: They can’t turn Bruce Wayne into Robin to Jim Gordon’s Batman.  That was my worry before every watching and there is a still a bit of a worry for me there.  That dynamic would be awful and unfixable over the long haul.

Tangentially related, what was with Alfred being all sassy?  At first I was mild amused and then I went to “Wait, that’s not right.”

Last thing, you ever read Gotham Central?  Rumor is that it is the closest source material out there and is on sale right now at Comixology.

Who is the revealed rogue next week?  And what kind of pace can they keep up with that?  And who is the first other hero introduced?  There is definitely enough interest here to keep me onboard for a bit.
Jason