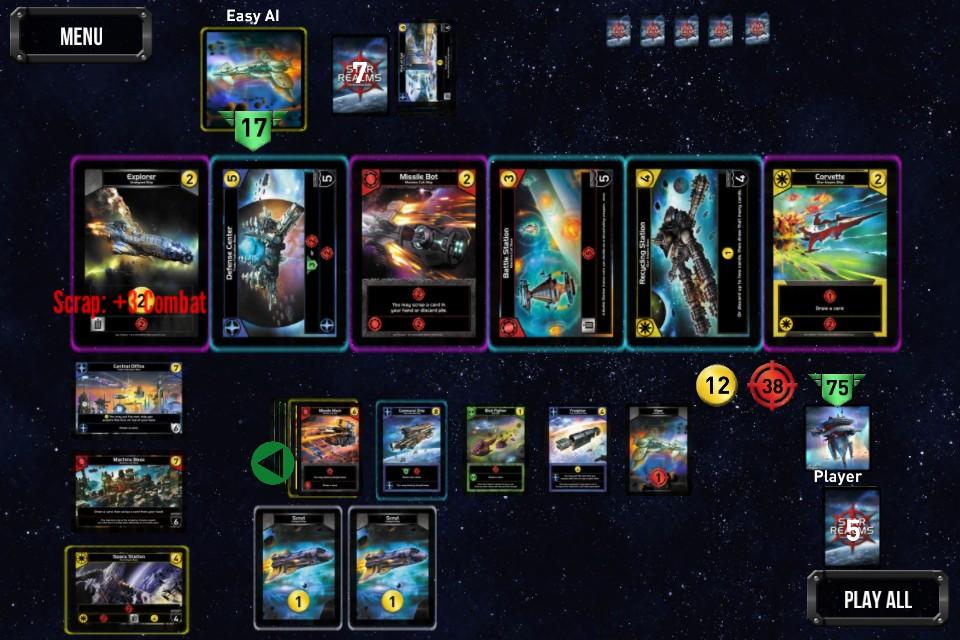 Have you ever been to a baseball game and noticed that the people sitting behind home plate think every high fly ball is a home run, so they explode to their feet and their hands shoot up in the air?

Of course, it turns out that it wasn’t a home run at all and the ball was caught in shallow right field, so all the fans just sit back down and make comments about what could’ve been. Hold that image because it will be relevant later on in this review of Star Realms for iOS.

Star Realms is a popular space combat deck building game. A local game store here in Minneapolis holds Star Realms tournaments, while I know that another briskly sells out copies at both it’s locations.

In the sake of expediency, I’ll share snippets directly from the designer’s webpage to give you a quick idea of the game.

The fun comes from the fact that the cards you acquire to power up your deck can come from four factions: The Trade Federation, The Blobs, The Star Empire or The Machine Cult.

Each faction and the individual cards of that particular faction provide unique abilities that link, chain, and interact with one another, allowing for powerful combos. As the game goes on you are able (with the right card draws) to string together bigger and bigger attacks and abilities. Man, it’s fun!

Deck builders are wildly popular, but many – like even the granddaddy, Dominion – can feel like playing a game of solitaire while sitting across from someone. Star Realms is a deck builder with direct conflict. Your goal is simply to blast the other fleet. Load the photon torpedoes, Captain.

But that’s the cardboard version, and we’re here to talk about the iOS version (It’s on Android as well, but having not played that one, I can’t comment as to how it differs – if at all – from the iOS version).

How does it play on an iPad?

White Wizard Games developed the game and it runs like butter. I haven’t had a single hiccup, lag, stall, crash, or stutter. This starship flies like a dream, folks.

In my opinion, all iOS games of this type should begin with a playable tutorial that allow players to jump right in a learn the taps, zooms, pinches, swipes, spins, and shimmies as they go. Star Realms gets a good grade here as things are mostly intuitive and excellent, which allows new players to ramp up to warp speed in just minutes.

I say mostly intuitive because there were a couple events that popped up later that I didn’t quite know how to fulfill the action. For example, the game gave me a pop up reminder (btw, thank you for that, Star Realms, thank you) that before I ended my turn my base had an action that was still available to me. The problem was that I tapped and pinched and zoomed and still couldn’t figure out how to trigger that action.

In fairness, I was a little distracted during the tutorial, so the game very well could’ve given me that pro tip and I simply glossed over it. My 3-year-old was trying to climb on my shoulders then tap the iPad with her toes, so needless to say, I may not have had my full attention on the tutorial. Still, this is the internet so I’m contractually obligated to blame something, and it can’t be my little pumpkin.

Yeah, but is Star Realms fun?

The AI in this game is definitely smarter than your average 5th grader. I played 5 times versus the AI and won 4 of them, which I feel is excellent balance for an AI. I felt challenged, but I never felt frustrated. In short, I was really digging it.

Then I turned my attention to the campaign mode and developed a crush.

Campaign mode is loads of fun. The story will never be accused of being wildly immersive, but there is certainly enough flavor in the story that you are drawn in and enjoying yourself. For example, the setup might be that you are defending against one of the factions. The third mission has you holed up against the Blob, and the mission is no pushover. The great thing is that since you are battling one of the factions, the cards from that faction are unavailable to you. That’s just the right kind of thoughtfulness that you want in a good campaign mode.

I have one major criticism of Star Realms, an otherwise excellent iOS game. Even on my full size iPad, the text on the cards is often too small to read without zooming in on them. Small little UI issues like this are far too common for board and card games that are brought to mobile platforms.

Too often developers forget to design for the medium they are working on and instead simply copy the other form over. This is called skeumorphism, and it means that the derivative object (the iOS game) retains ornamental design cues from structures that were necessary in the original.

It this case the original was a card game, but why does the digital version necessarily need to hold literally to the idea of a card. What if the designers had rethought each starship card as a slick 2D render where the card attributes would “float” just off to the side?

At the very least, the cards should have been redesigned so that they are clearly readable on the medium you are using. To have to zoom in on cards just to read them slows down what is otherwise EXCELLENT game play.

Star Realms is excellent. It’s staying on my iPad for what I hope is a long time, and perhaps a long, long time as I’m hopeful that this great 1.0 version will be followed by a 2.0 that brings UI tweaks and additional campaign missions.

Truly, it’s just these UI gripes that prevent this from being a home run for me. Still, Star Realms is a solid hit deep into the warning track. It’s a load of fun to try and trigger the hundreds of combos available and the gameplay rarely (if ever) gets monotonous.

The game is free to download and $4.99 unlock the whole kit and caboodle. White Wizard Games spent months of development time to bring us a great iOS game. The least we can do is shell out 5 bucks. In return you get a fun and engaging experience. That’s a deal.

Marvel Strike Force: Who or What is the Infinity Watch?