We’re continuing our post series where we review the television show Gotham, but with our nerdy little twist. Us Nerds on Earth writers will often banter back and forth via email, giving our first thoughts about the latest comic TV show we’re watching. It’s our version of Mystery Science Theater and our hope amidst our back-and-forth is that you end up getting a good review of the episode, even if the style is slightly off center.

Clave,
From the title itself, we know that this week’s episode of Gotham is going to be interesting, as it is entitled “Selina Kyle.”

So what do you think about the bizarre reaction and emotional whiplash from Alfred as we find emo-Bruce Wayne using a candle to hurt himself? If this is going to be an ongoing deal, it could make for a long season. (Plus why would no one eventually get the poor kid a good therapist? Maybe, I don’t know: The Scarecrow or Harley Quinn?)

Second, the Ned-Flanders like kidnappers may be the scariest thing we have seen in a bit. Anyone looking for a creepy Halloween costume, Gotham may have given you a good one. What did you think of them and the gangster meet-up?
Jason

Jason,
I just read that Netflix is making a sequel to Hidden Dragon, Crouching Tiger and it reminded me of Selina Kyle with all the crouching she does on rooftops. She’s totally a ninja.

One thing I can say definitively about this show: I’m curious to see more. I’m intrigued and anxious for more of Selina Kyle’s backstory to unfold. I also like the young actress, which provides me a perfect segue into the fact that I really like the casting and acting on this show thus far. Well, with one exception…

I’m not too keen on Alfred. “Bizarre reaction and emotional whiplash” is right. I think I’ll fast forward Alfred’s scenes as so far I’d prefer to watch Hulu commercials than his scenes.

Whoa, they are setting up a TON of intriguing story lines so even though I didn’t comment on the kidnappers or Harley Quinn, kid therapist, I’m going to bounce it back to you.
Clave

Clave,
On the Alfred thing, we are in lock step. I am not sure what they are going for. Did Michael Caine own that role to the point that no one can pick it up again? 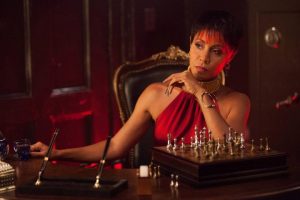 And I am definitely interested in seeing more.  They are doing a nice job of setting up some things.  For instance:

Still pulling for the redemption of Harvey (played by Donal Logue, who I am obligated to point out is OUTSTANDING in Terriers, a “dead too soon” television show now streaming on Netflix).  The work between Harvey and Gordon, as they both push each other’s boundaries has immense potential. And I do think the Selina Kyle stuff is interesting.  How much of that would be too much for you?
Jason

Jason,
There is a dragon’s horde of wealth in terms of story lines they have here. Holy Writer’s Room Dilemma, Batman! I’ll share my thoughts on the list you created above:

Agents of SHIELD S2E2 Review: Heavy is the Head