We’re continuing our reviews the television show Gotham, but with our nerdy little twist. Us Nerds on Earth writers will often banter back and forth via email, giving our first thoughts about the latest comic TV show we’re watching. It’s our hope that amidst our back-and-forth exchange that you end up getting a good review of the episode, even if the style is a little quirkier than what you’ll find from a traditional review.

Clave,
Okay, right from the get go, the episode title invokes something that is important in Gotham’s history: Arkham.  Arkham is probably best known by us nerds as one of the best video games series of recent years.

Some questions for you:

Jason,
I’m intrigued by what the writers will do with the relationship between Penguin and Gordon for sure, but I’m more interested in how Penguin ran away from Gordon so fast. Were those boots he stole last episode Boots of Swiftness +3? Seriously, he’s been waddling around for three episodes, then he turns into the Flash all of a sudden?!?!. (Boom! DC character name drop!)

To be honest, I was a little bored by this episode, which is the first time I’d say that with Gotham. Gang wars are a little bit of a yawner for me, and the hitman villain this episode was ho-hum in my opinion (despite the eye bit).

But the plot did move along in this episode, and for the 4th episode of the series, it’s not unreasonable to have an episode that exists mainly to move the characters forward into interesting relationships and situations (like the breakup of Gordon and Barbara, for example).

My question: Who is the new singer Fish Mooney recruited? Is she a character fro the comics I simply don’t recognize?
Clave

Clave,
I have to say, I agree with you on the pace of this episode.  It just felt slow and while it did advance some plots, it also was the kind of television that you just sort of watch while you fold clothes. (I am a single man. I do my own laundry.)

The villain of the week was…boring. Which makes me wonder if there was some back story that got edited out about the eye thing.  Because it was so prominent. And what kind of administrative leadership is there at Gotham?  Harvey and Gordon are shooting guys left and right and back at it the next day?   That seems weird.

But I do what to give a shout out: I love the character work being done by Butch Powell as Butch, Fish’s right hand man.  Something about his portrayal is great. I believe in him as a gangster who also kind of likes his job.

The break-up of Jim and Barbara lack punch because we all KNOW that they are never, ever, ever NOT getting back together.

I racked my limited Batman brain knowledge on the singer and I got nothing.  It should be interesting to see how Fish deploys her “weapon.”

And can we just praise them for abandoning the Penguin food thing for now? I was very worried…
Jason

Jason,
Ah, but did they really abandon the food thing with Penguin? Remember, he killed those guys with poison canoli! Not only did that ruin my love for canoli, as I’ll now think all canoli is laced with Penguin poison, plus I also like to think that off-scene the Penguin pulled out a second box on non-poison canoli and scarfed them down as he waddled around the dead bodies of his dead lackeys.

I’d like to say one more thing about the poison scene. We’ve seen Penguin brutally and violently murder in past episodes, the canoli scene set up his scheming and diabolical side. His rise to power and respectability is being written believably. I like it. 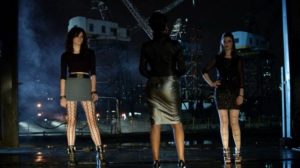 Agreed this was a watch while you do your laundry episode (I am a married man. I do most of my family’s laundry.), and I’d unfortunately sum it up with the word ‘filler’, but that’s not to say I’ve lost interest in this show.

Gotham is still good stuff! And Holy Canoli, Batman, how is Fish going to use her new weapon?!?
Clave