After last week’s season opener of The Walking Dead, we jump into episode 2 – Strangers – to see what is going to happen.

As we open the episode, we see the ominous smoke cloud floating up.  After a series of slow motion montages, (I think they got the new iPhones and wanted to test out that feature), we see a few different conversations.

First, Rick makes peace with Tara, knowing that she had at one point been with the Governor at the prison.  And if there is a theme to this episode, it is people making peace, with each other, with their pasts and with what their futures could be.

Next up in the reconciliation train is Tyrese and Carol, as they talk through who knew what (Carol and the prison, Carol and the “look at the flowers” moment) and how they should talk about it.  Tyrese seems to be trying to be Carol’s advocate with the others and she seems reluctant in some way to make peace or ask for forgiveness.  Tyrese’s line of “I just need to forget it” shows up in many other character’s speech and actions this week.

After a humorous scene of Michonne reaching for the non-existent katana, we get Rick and Carol’s moment of reconciliation, where he asks for her to accept them to the nomadic, wandering world that he had exiled her to when he had her leave the prison. And after she accepts, we see Darryl try to get Carol talk about what has happened and she takes on Tyrese’s line and desire, to seek to forget.  But Darryl seems to know that there is more simmering there below the surface.  At the end of their conversation, Darryl hears something in the woods before declaring that there is nothing there.

We quickly learn that is a cover, because the next morning, he is coming back from the hunt and discuss with Rick the signs that someone or something is out there stalking them.  So the leaders are on high alert, which shows itself later.

We then get a scene of Sasha and Bob playing a game of “Good Out of Bad” where she talks about the bad and he tries to redeem it.  She shares with Tyrese that Bob is very good at this when they suddenly hear the cries for help. 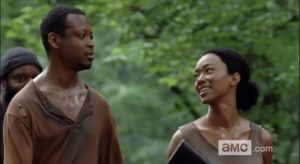 One of the most interesting things that has happened is that Carl, who at one point was becoming a borderline psychopathic killer to protect his clan (Remember the guy he shot in cold blood outside the prison?), has become a sort of moral compass for the clan and for Rick.  Rick’s first instinct is clearly to not answer the cries for help, but Carl urges them all forward, which is how the clan saves and meets the priest Gabriel, who shortly after being saved, vomits.  While they do a bit of an explanation on how he has survived this long without killing walkers, there is a sense that something is off.

Rick and Gabriel have some banter and discussion back and forth, when Gabriel tells a couple of bad priest-like jokes.  (I work for a church.  Because of that, I can tell you that there is real funny, there is sorta of funny and there is “church funny,” which are the kind of jokes people politely laugh at because they are in church.  Gabriel learns that church funny doesn’t have a place in this world, which is the first time I have thought “Maybe that world would be better.”)

I was torn with the notion that a priest at that point would be more or less suspicious.  I mean, if the world falls apart would that mean the faith of the priest would die? Or get stronger?  I genuinely can’t imagine an archtype the team would run into that would create more suspicion than a priest would.

As they arrive at Saint Sarah’s Episcopal church, we see a sanctuary in place, with the etching of scripture, of little kid’s drawings and more.  This is a moment where I think The Walking Dead series is set in exactly the right setting.  Flannery O’Connor once called the South “The Christ-haunted landscape.”

That mix of right and wrong, sins and forgiveness has shown itself periodically in the series.  We have seen it in Herschel, and we are now seeing it echoed in Gabriel and his church, and his conversations with Rick about forgiveness.  (Saint Sarah is an interesting choice for a name of the church; she is the saint of the Gypsies and nomads, which definitely foretells that this is who our heroes are now!)

This leads to the discovery of a church bus, and the declaration of the group to Abraham that they will do what Rick does, because they are not all splitting up again. Rick knows they need supplies, so they plan to take Gabriel to a place where he knows there is food.  In doing so, Tyrese becomes Judith’s nanny, which has to be easily the most bad-ass nanny since Vin Diesel in the Pacifier.  Rick and Carl have a moment, where Rick reminds Carl that he is never safe, to not let his guard down even for a moment, while Carl reminds his dad that “Everyone can’t be bad” and that they are strong enough that they can help others.

Again, this exchange shows a changing of the guard, as Carl has become the sense of right and wrong that Rick has seemingly lost in the course of the series.  While Rick was doing everything that he had to, Carl has drifted and come back around to be a stabilizing force.  And how far Rick has gone shows up in the conversation that he and Bob are having, as Bob has to remind him that nightmares end.

But Carol is still not right, as Darryl urges her to start over, to begin again with the group.  And as he does so, they leave the car they have found as an emergency get-away vehicle should things go south at the church.

As the team finds the food bank, Rick is again insistent that Gabriel is a part of the effort, even crawling down into the nasty water that has filled the area containing the food and zombies.  As the fight goes on, the Christ imagery and Gabriel gets laid on a bit thick.  He refuses to fight, even as a church lady looking zombie bears down on him and he spreads wide his arms as he is up against a wall.  It was not subtle and one of the moments in the series where I have felt “They are trying too hard.”

In the fight, Bob is nearly the victim before Sasha saves him.  They do some interesting things there were we see Bob is not quite the same.  Is he bitten?  Has his sense of making good out of bad gone?

Michonne and Rick then have what is one of the only conversations in the series that looks backwards.  She talks about how she wasn’t fully living while she was out there on her own.  She speaks of how she misses Andrea and how she misses Herschel.  But that pain is worth it to be a part of the group, to be truly alive again. 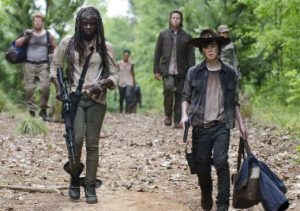 When they get back to the church, Carl finds marks of people trying to get into the church and shows Rick a sign that he says must mean something about Gabriel.  The message carved into the outside wall of the church: “You’ll burn for this”

That night as they celebrate the food and drink the church’s wine, a restless Abraham gives speech to the survivors but challenges them: Is that all you want to be?  A survivor?  And after Eugene gives some more information, Rick decides that a Judith coo is the answer that they are all going to DC. I hope this plays out all season with Tyrese lifting Judith up like Simba in the Lion King any time they have an important decision to make.

Tara then has to confess to Maggie that she was at the prison with the Governor.  In a remarkable example of forgiveness that has shown itself over and over again in the episode, Maggie extends her grace simply saying “You are here with us now.”

Rick then thanks Gabriel but says that he knows something is off and that he will hurt him should harm come to the clan because of him.  But as he has done this, Carol has snuck out in the middle of the night, headed for the car.  Is she leaving the group?  Is her guilt so great that she can’t be a part of the group?  As she prepares to leave, Darryl shows up, just in time to see the black car with the cross show up, the one that kidnapped Beth last season.  After smashing the lights on the car, it looks like he and Carol will be in pursuit to save Beth.

At this point, Bob is outside walking around, broken.  Is he bitten? Wounded from the food bank battle and hiding it?  Just as he begins to have a break down, he gets hit.

When he comes to, Bob is being talked to by Gareth, who has been tracking them, along with the rest of the Terminus people, reminding Bob that they have become hunters.  In the course of the conversation, Bob, who was playing a game about making “good out of bad” earlier is shown to be missing his right leg, as Gareth chews away and says that Bob tasted better than they thought he would.

The priest image part was so over the top that it made the episode lose some integrity and, to some degree, the story points moved somewhat slowly.  I do think it stabilized and addressed a lot of issues that were eventually going to need to be dealt with.

So what happens next?

So what do you think is next?  What will Judith say to lead the team to next?  Does Gabriel survive this apocalypse?