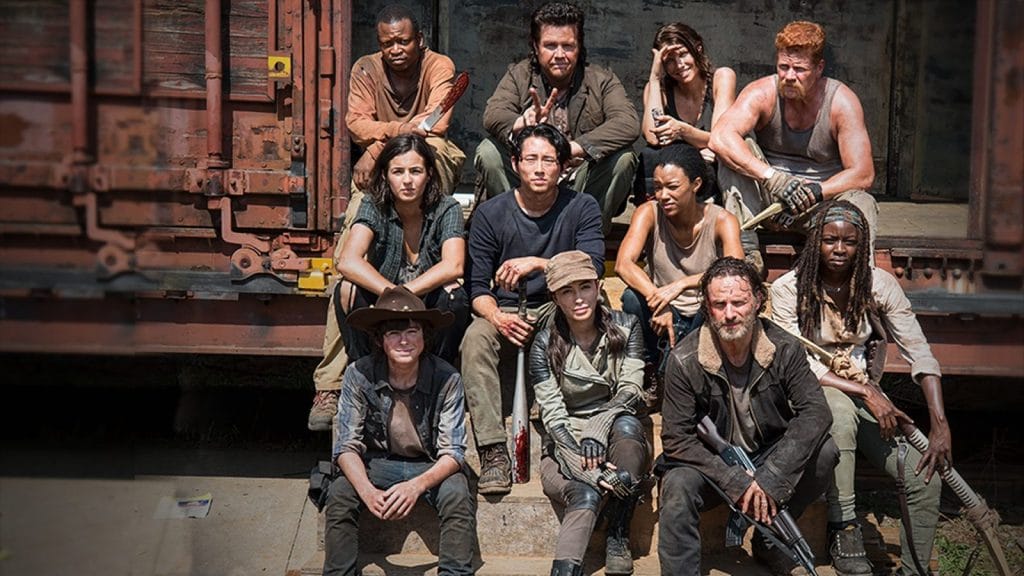 If you had bet 5 years ago that the highest rated show on television would come from a long running black and white comic book zombie series, you would be a very rich man.  Without a doubt, The Walking Dead is probably the most anticipated television of the new television year and for good reason.  While I was reading the comics for a time, the series has reached a point where it is further in front of the timeline than I have experienced, so there are many points and plots that I have no idea what is coming.

At the close of last season, most of the surviving family are captured in a train car by people, who may or may not be cannibals, at the place they called Terminus.

A quick flashback reminds us of how we got here and Rick’s speech about how “They’re screwing with the wrong people” sets up that they are going to fight now.  Rick has become like the darkest version of Friday Night Lights’ Eric Taylor with these speeches.  But the group believes as you see them preparing for a fight, as Darryl brings people up to speed on Beth, who is still missing having been kidnapped.  After expecting the front door to open, a tear gas container comes from above, and Rick gets kicked into unconciousness.

Next up, we see a line of men that ends with Glen, Darryl, Rick and Bob.  The set-up seems to confirm the cannibal idea, as we watch man after man get hit by baseball bat in the back of the skull, neck slit and bleed into a trough.  Bob attempts to negotiate with Garrett, the Terminus leader, who wants the inventory of Rick’s hidden stash.  After some banter back and forth, and Rick’s promise to whack Garrett with the red handled machete.  And we know is going to follow through, as we have already seen his weapon hidden.  At this point, Rick’s cockiness is a sign of arrogance, or craziness.

Then there is a loud explosion and the walls shake.

The focus shifts to Carol and Tyrese, as we see them encounter a zombie horde, strangely walking down the tracks, and only the tracks in the direction of Terminus.  After some discussion, they come upon a Terminus man, setting up some sort of trap near a cabin, using a massive amount of fireworks.  They take the man prisoner, who then has a long conversation with Tyrese about the state of the world as Carol, zombified moves closer to Terminus and using a propane tank, a sniper rifle and a firework, sets off the explosion that we saw from Rick’s perspective earlier. 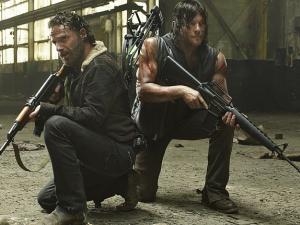 As we see Carol walking in with the zombie hoard, with her sniper rifle, we see the fire zombies and the people of Terminus fighting to survive.  With the distraction and Garrett having fled to investigate the explosion, Rick does the work of freeing himself and killing the two men left with them.  After freeing the others, they prepare to go out, seeing and confirming the cannibalism on sight.

As they head outside, we see those left in the train car, debating about what is happening.  And Carl speaks confidently that Rick will be back for them.  At the same time, Glen then reminds Rick that they have to free the other that were captured because “that is still who we are.”

Carol is looking across the spoils of the Terminus’ battles, picking up Darryl’s crossbow, who is in the process of saving Rick’s life.  It should be noted that the Terminus people are, for the most part, terrible shots.

Carol is having a fight with the elder female statesman of the Terminus group.  It is an interesting conversation from the standpoint of giving us some background on Terminus.  She explains that at one point, the signs were real but then they were invaded, conquered, raped, killed, before eventually fighting back; the message that they felt they heard was “You’re the butcher or you’re the cattle.” Carol wounds her and then let’s the zombies in to finish her off.

Tyrese and the baby then have a fight on their hands, as the captured man manages to free himself enough to get a hold of Judith and threatens to killer her unless Tyrese goes outside into the zombie herd.  Tyrese manages to do fight his way back, capturing the man and killing him with his punches, proving to himself that he can do what is necessary when he has to.

The train prisoners are then having a discussion, as Eugene reveals that he was a scientist and thinks that they can essentially reverse the virus genetically, fighting “fire with fire.” Then the team frees the train car prisoners, they manage to fight their way out of the compound, hopping the fence.  As they go to retrieve the buried guns, a debate is raging between Rick and the others, about whether to return to Terminus and wipe everyone out or to go forward.  As the debate rages, Carol finds them and we have a tender reunion between Darryl and his crossbow, (and Carol, I guess), and eventually Rick and his daughter.  With this new crew in place, they head off down the tracks, changing the sign to show that there is “No Sanctuary”.

The last two scenes show some immense promise. The first is a flashback to when the people of Terminus were being victimized, complete with Garrett’s promise that they will not be the cattle anymore.  The second is in a cloaked figure finding Rick’s “No Sanctuary” sign before removing his mask and revealing that it is Morgan Jones, the first person Rick ever encountered after waking up in the hospital all the way back in season one, episode one.

All in all, this was a great first episode of the season.  It moved the story forward dramatically.  These are the three major points:

There are still some dangling plot threads.  Obviously, we want to know what happened to the kidnapped Beth. Is she going to held by the people who assaulted Terminus? A new group altogether?  And let’s be super concerned about one of the major issues: what about Michonne’s sword?

This season looks to be a great one based on the early work on this episode and the key thing the writers seem to have learned from previous seasons: a moving forward team encounters better stories and plotlines than a group that is sitting in one place and playing defense.  Hopefully, the driving force will be the push towards Washington and to see if Eugene can really bring the cure he thinks he can.

Mice and Mystics: A Board Game About Little Mice on A Big Adventure