Mice and Mystics: A Board Game About Little Mice on A Big Adventure

Last year my 5-year-old daughter spotted a tiny, itty-bitty, little grey mouse just kicking back and enjoying life in our basement. She screamed, which caused my 3-year-old to scream, who was followed by my wife, who screamed.

At that point I think the mouse screamed. I can’t confirm that though.

I cast a spell of swiftness and caught that little squeaker in a clear plastic plano box. Upon close inspection of the little mouse, my daughters’ screaming turned into whining for us to keep this little mouse.

I have to admit, he was cute.

But I told the girls that I needed to take him outside to “release him” so he could go on adventures in our back yard. My youngest hated to see that mouse go so much that she cried for an hour.

Mice and Mystics is a cooperative story-driven fantasy game by Jerry Hawthorne of Plaid Hat Games.  Each “chapter” of the story can be played individually like a dungeon crawl or played sequentially to form an epic narrative campaign that tells the story of Prince Collin and his worthy quest to save his father the King from the wicked Vanestra. Prince Collin and his closest friends have been turned into mice, the king is close to death, and Vanestra has turned the guards (roaches and rats) against you!

The game is played on a game board that changes tiles depending on the chapter. The tiny heroes of Mice and Mystics explore, fight the minions of Vanestra, and complete various story objectives. Mice and Mystics comes boxed with unique heroes and villains represented by beautiful plastic miniatures and features combat that is determined by the roll of custom dice.

What’s in the Mice and Mystics Box?

Mice and Mystics comes with 6 mouse hero figures and 16 evil minion figures. All are simply, yet beautifully done. I have to admit, these mice are cute.

The miniatures are unpainted and it’s been scientifically proven that it’s more fun to play a game with painted miniatures. Although I have painted some of my Zombicide miniatures, I haven’t tackled Mice and Mystics yet. But I’m certainly looking forward to it as it will only add to the entertainment and enjoyment I’ve gotten from the game. 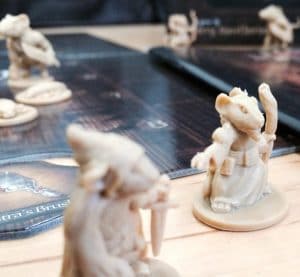 In addition to the game tiles, miniatures, and custom dice, there are also a gazillion cards and counters, each and every one with gorgeous artwork. Plaid Hat typically produces excellent quality games and this is no exception.

The most wonderful thing in the box however is the storybook itself. It’s wonderfully written and full of charm and adventure. As the story unfolds you are substituting characters in and out, being introduced to new villains, given the option for side quests, and mightily living life as a tiny mouse adventurer. Playing through it with my girls has been a joy.

How Does Mice and Mystics Play?

The rules are relatively simple and straight-forward. It’s not a difficult game to jump into. Your little mouse characters can perform a few simply actions per turn like scurry, battle, search, or explore. A turn such as battling a coach roach is resolved by rolling dice. It all works in a way that is fun and engaging. (An excellent how to play video can be found here.)

You can’t dawdle in Mice and Mystics.

A nice touch of the game is a game board shaped like a grandfather clock that acts as a timer and also tracks a cheese wheel that – when full – signals a surge of minions. This gives the game the feel of pressure and keeps it moving. This is also an area I’ll occasionally house rule to give my daughters a little more freedom when playing. Daddy will sometimes gloss over a rule or two in order to make sure everyone is having fun and that the story is moving forward.

Final Thoughts on Mice and Mystics

Let’s talk about the elephant in the room, which is a very analytical way to speak of elephants indoors. Typically, my 1st reaction would be more “Aaaahhh! THERE’S AN ELEPHANT IN HERE! RUN!” But that’s just me and, anyway, mice scare elephants, getting them all riled up. The game is expensive, but you’ll be very pleased with what you get in the box and when you calculate the hours upon hours upon hours of enjoyment it gives, you realize the game is an absolute bargain.

Another minor quibble is that one of the cards spoils the identity of the villain and I wish that Plaid Hat Games would’ve packed that card in a little envelop that read “Do NOT open until your final encounter” or something like that. Again, a minor quibble, but I feel it would’ve strengthened the final chapters.

I alluded to the fact that I’m loose with rules and very comfortable with minor issues in order to squeeze out maximum fun. But I also realize that others may not be as comfortable with this and those folks could feel some frustration with rule ambiguities or frustration from fickle die rolls. That I will concede you, but I’ll fight you if the story of Mice and Mystics doesn’t simply make your heart happy. It really is wonderful.

Jerry Hawthorne has done a masterful job in creating a board game that has a very strong RPG story feel. The story is fleshed out with engaging encounters, interesting villains, but most of all some tiny little heroes that will grow in skill over the course of their adventures.

Finally, Jerry Hawthorne has also created some beautifully written female heroes that have been a gift to my little mouseketeers. He should be commended for this and other game designers should follow his lead.

Plus, you have to admit the mice really are cute.

UPDATE: IT’s been confirmed that Mice and Mystics will appear as a two-part episode on Wil Wheaton’s Tabletop. Get ready for the game to sell out!

We played Mice & Mystics today on tabletop, with my family! http://t.co/GfhNXGsboA