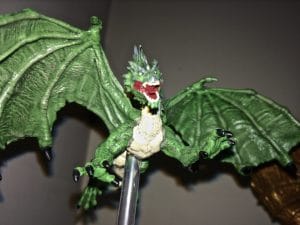 So why did a non-painter decide it was a good idea to dabble in painting miniatures? OK, you’ve got me on that one, but I can unequivocally say that this total newb is enjoying his inaugural foray into miniatures painting. I’ll share some of my early lessons in case you’re interested in giving miniature painting a go.

Step One: What’s a Miniature?

Maybe you don’t even own any miniatures. First of all, they’ve come a long way from the old pewter days on unpainted sculpts used almost exclusively for Dungeons and Dragons. Modern manufacturing methods are creating some fantastically detailed sculpts from an ridiculous array of genres, and from a variety of new plastics and resins.

There’s a tiny little world out there. It even makes me want to get a 3D printer and create my own. But I’d advise a beginner to simply go to your local friendly neighborhood game store and pick up something from a genre you like.

Me, I purchased a copy of the Zombicide board game. I comes with nearly 40 miniatures! All are unpainted, but have really cool sculpts, making it a perfect starter kit for a new painter.

Step Two: Do I use Finger Paints or Something?

Part of my impetus for giving this a shot was that I had some random supplies laying around. I was leading a creative Africa project and there were supplies left over, including tiny little detail brushes. I started there, but through a little research plus trial and error, I can give you a simple supply list that will allow you to slap some paint on a zombie:

Again, I was a complete novice at this, so I was hesitant to invest much money into it, but I’m really glad that I did.

Painting miniatures is relaxing and enjoyable (and relatively cheap!). In a way, it’s a nerd’s version of meditation. I turned on my desk lamp, played some St. Lucia quietly in the background, and had a really peaceful time painting my gory, ferocious little undead minions.

The Zombicide minis are nicely detailed and I just had to let some of that go and determined early that I was new to this and not yet skilled enough to paint anything detailed or fancy. I mostly kept to broad base coats and kept color mixing to a minimum. I didn’t try any dry brushing techniques.

I chose zombies because the shading is so forgiving. It simply makes them look like they’ve rolled in the mud, but gives them depth and a grey, aged look. Any goofs I cover with blood, which I ran back to the game store to grab. Turns out Citadel also makes a paint with the gloriously epic name of ‘Blood for the Blood God.‘ Perfect.

I made the mistake of looking online at miniatures painted by pros. (Never compare your beginning with someone else’s middle.) Mine aren’t even in the same league, but I’m pretty pleased with my first effort and I’ve had a GLORIOUS time doing it. 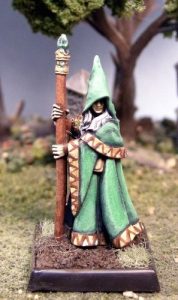 The Citadel paints have been excellent to me and having just a couple of brushes is just fine, I simply rinse them out in my “Trust Me I’m a Ninja” mug.  I’m now ready to branch out, try some new genres of miniatures, and experiment with some trickier techniques.

I know I’ve been shilling hard for Zombicide, an expensive game. But not only does the purchase give you hours of fun repeated game play with friends, but it’s overloaded with miniatures, which gives a novice painter dozens of hours of entertainment. Zombicide might seem like a high price, but for what you get in the box, it’s an absolute steal.

Imperial Assault from Fantasy Flight Games will appeal to Star Wars fans as it is loaded with unpainted miniatures (I painted my Stormtroopers).  Mice and Mystics from Plaid Hat Games will appear to family gamers. Not only will the purchase of those net you a great game, but you’ll get hours of enjoyment out of painting the miniatures included as well. I’d also love to hear in the comments if others have suggestions for where a beginning miniature painter could pick up a good value set.

Additionally, I’d love to hear in the comments if anyone else has had any experience in painting miniatures. I’ve really enjoyed my brief experience with it and I’m eager to learn and hear more.

Give it a shot, fellow nerds!

I have two daughters, aged 3 and 6. They love to cozy up next to me and do the things I do.

All it took for them to be able to paint miniatures with me was a trip to the dollar store. For a buck I got a bag of the old school green plastic army men. I told them that those were their very own ‘zombies’, then set them up with there normal set of washable paints and they went to town.

I Went to My First D&D Organized Play Event (and You Should Too!)

Do You Read Sci-Fi or Fantasy? This List is For You!