Do You Read Sci-Fi or Fantasy? This List is For You!

As an avid reader, I’m always on the hunt for what to read next. I’m constantly asking others what they’re reading, if its any good, if I can borrow the book when they’re done, etc. I’ve made many fast friends over shared loves for good literature.

I’ve very few pleasures so great as when I lend someone a book I love and no furies so fierce if those books are returned damaged or lost completely.  They’re among my most prized treasures; lining the walls and shelves of an entire room in my home…and I may never have enough of them!

My time is limited, however, and I can’t stand the idea of investing hours into a lackluster book when quality abounds.  I don’t know about you, but when I walk into a Barnes and Noble my eyes glaze and my mouth waters.  So many potential reads…how to avoid the duds and maximize the awesome reads?

Well, a couple of years ago I was turned on to NPR’s Top 100 Science Fiction and Fantasy Books list, which was a godsend.  60,000 book lovers weighed in on what should not be missed and afforded me some direction and a longterm goal.  I found it fun on two levels:

1) I had read a pretty solid number of the books on the list.

2) I had not read a pretty solid number of books on the list.

I noticed something, too, about the compilation:  It represented far more than one hundred books.   Many of the entries represented trilogies, sagas, or – as in the case of the Xanth series – entire libraries.

So I set about expanding the list to its full set of constituent parts (Which I bequeath unto you here. Seriously, click that.); i.e. The Lord of the Rings became The Fellowship of the Ring, The Two Towers, and The Return of the King.  In the process, 100 quickly became 300+.

This list is the perfect combination of the phrases “If you’re going to do something, do it right” and “Go big or go home.”  The immensity of this list is absolutely thrilling to me.  Since I began to meander my way through the titles, I’ve only walked away from a single entry after my 100 page grace period (The Silmarillion, for the curious), but I’ve also discovered some of my favorite reads of all time (like Fahrenheit 451 and Starship Troopers which is nothing like the movie).

If you’re looking for top shelf sci-fi/fantasy, here it is.  If you’ve never given the genres a fair shake, here’s your chance to avoid the dross – ’cause its out there.  The folks over at SF Signal even whipped up a tremendously awesome flowchart that you can use to figure out what to read. 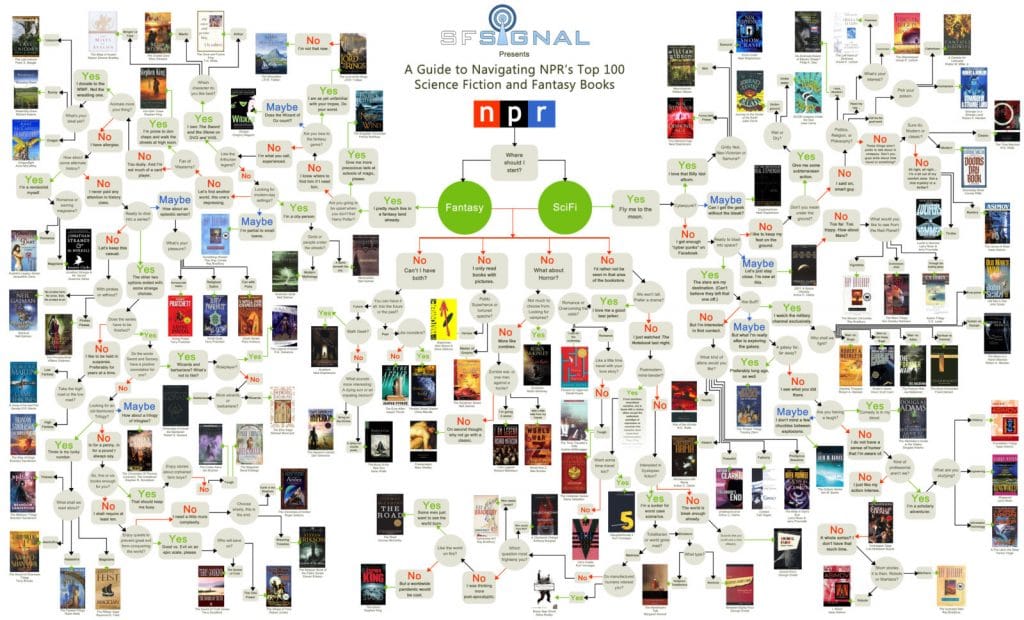 Click to open in a new tab/window and enlarge for the full effect!

1) Its meant to be an invitation and a tool, not a discourse.

Fiction is freeing!  Let the turn of the pages grant you a reprieve – however brief – from reality.  I thoroughly hope you become enamored with new worlds, relate to new characters, invest intellectually and emotionally into new stories, and pass the list along so others might do the same.