By Clave Jones On May 11, 2017 Last updated May 10, 2017
Share TwitterReddItPinterestFacebookEmailPrint

“It’s better to be effective than original” is a phrase I use from time to time. There are times when  instead of spinning your wheels trying to come up with something novel, its better to go back and play those greatest hits, except with a creative twist.

This is the spirit of an homage. If something worked–that is if it resonated and was beloved–then it’s perfectly cool to use a riff of that old idea as the basis of a new creation. Sometimes something wholly fresh and original is called for, yet other times, the best thing you can do is to play homage to the classics.

This is what Paizo understood when they created the Ironfang Invasion Adventure Path. Paizo had written a string of more novel and imaginative adventures, so they decided it was time for a back-to-basics approach that serves as an homage to the old wilderness adventuring of Dungeons and Dragons. Ironfang Invasion is their answer to that. 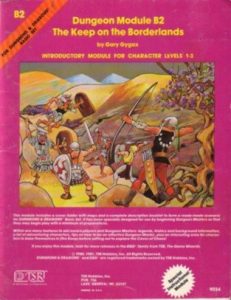 But what is clear is Paizo wasn’t just content to go back to the basics, they wanted to harken back to the classics. So Ironfang Invasion reads as a love letter to what is for sure one of the most classic and recognizable D&D adventures of all time: Keep on the Borderlands.

I’ve written extensively about Keep on the Borderlands before, so I’ll just sum up here. (Please read our look at Keep if you aren’t familiar or are looking for a deeper dive. I’ll wait.) In short, the premise of Keep was players arrive at a keep that would serve as a home base as they’d venture out to investigate sprawling caverns in the nearby hills that are crawling with monsters. It was also the adventure that laid the foundation for the sort of open-ended “sandbox” adventures that are now relatively standard among modern D&D play.

And Ironfang Invasion is dripping with the same feel and flavor that made Keep such a beloved adventure. Let’s go through a few of them: 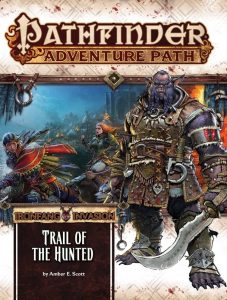 If you are going to have a back-to-basics adventure, you need classic monsters. Few D&D monsters are more recognizable than hobgoblins and bugbears, and they represent the fighting force in Ironfang Invasion.

Although it certainly doesn’t lack in variety as the adventure progresses, the Irongfang Invasion is the story of a hobgoblin army that invades a village to use it as a staging ground for a full takeover of the countryside. This “Ironfang Legion” features bugbears working as captains.

Whereas Keep featured some bugbears as well as some lizardmen that don’t appear in Ironfang, the point is that both adventure feature the long-known creatures of classic fantasy RPG settings. Sometimes you don’t need a super original monster in order to have an effective RPG adventure.

Sometimes all you need for fun is a good cave to explore. When I was a young lad, some of my favorite memories were exploring the woods near my house. This included daring others to drop into the sinkholes along the ridge of Tater Mountain. I have two points with this: 1) every area should have a locale named Tater Mountain and 2) there is something exhilarating about exploring a cave.

Keep on the Borderlands had a couple of iconic cavern structures to explore and clear, one of them being unnamed and unmapped in order to allow Dungeon Masters an opportunity to freestyle a little bit. Ironfang has a cavern structure in the midst of the wilderness as well, yet this one could potentially serve as the home base for the PCs. 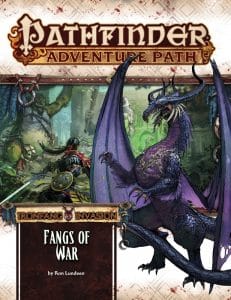 While PCs are the heroes of the adventure, NPCs provide so much flavor. Keep famously has opportunities for NPC mercenaries to assist the PCs as the explore the nearby wilderness. Ironfang has the potential to have several interesting NPCs flee the hobgoblins with the PCs.

In both instances, the NPCs created opportunities to further flesh out the story, adding wonderful interactions and flavor to the adventure.

But there is more! Old school adventures like Keep on the Borderlands were known for having a really sparse structure, but Ironfang Invasion is a full Adventure Path that consists of multiple book volumes that include copious detail and additional resources and appendixes. (Keep on the Borderlands would be a flop if it was printed today. Modern RPG adventures cater to players who are spoiled by 100 GB of video game data in games like Fallout, so they expect the same in RPG publications.)

Pathfinder Adventure Paths are six books long and take characters from level 1 up to 14 or something. So it’s about book three where Ironfang Invasion drastically cuts ties with its Keep on the Borderlands roots. And that’s the point of an homage: point back at the best of what came before, yet give it an interesting and updated twist. Paizo couldn’t have executed it any more perfectly than they did.

The Drift Episode 2: Races and Classes in Starfinder

A Video Introduction to Black Bolt #1