Welcome back to the latest edition of My 90s Summer. Each week, I reread a comic series from the formative years of the 1990s to see if it still holds up twenty-plus years later. This week, I’m tackling a sentimental favorite from the 90s, the first five issues of Marvel’s Beavis and Butthead.

MTV’s dense duo are as ubiquitous to the 1990s as grunge rock, Crystal Pepsi, and snickering about White House interns. It is probably hard for most young whipper-snappers today to imagine just how colossal MTV was in the 90s. MTV was the arbiter of cool culture, with Beavis and Butthead being a crucial part of that media behemoth. 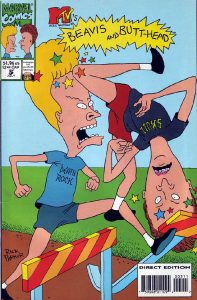 The one place they weren’t? My household. My parents (and I’m assuming a whole generations worth of parents) loathed Beavis and Butthead. We didn’t have cable growing up in the stately Morgan Manor, so there was zero chance that MTV would ever hit the tube on my parent’s watch. Yet, I’m totally convinced that my well-meaning Southern Baptist mom was more worried about Beavis and Butthead influencing my impressionable mind than sex, drugs, and rock ‘n roll combined.

I obviously adored the books as a teenager, but what about now?

Beavis and Butthead: The Comic

Despite having aged between then and now, perhaps I haven’t grown up. My read through of the first five issues brought all the idiotic immaturity out of me that has sadly remained since those days. I giggled and snort laughed at every crude reference, disgustingly detailed bodily function, or asinine turn of events. 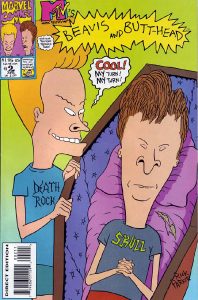 Let’s face it, Beavis and Butthead was a show that always kept its humor primitive. It’s not exactly highbrow entertainment. To this day, several of my friends and I regularly talk about our favorite moments from the show. The discussion therein seldom rises above the sixth grade level. We’re all well educated guys with stable jobs and families, but there’s no end to our enjoyment of thinking back to these two idiots. Their boorish behavior is seldom subtle. But that’s the charm of Beavis and Butthead. It’s so immature, so uncouth, and the characters are so entrenched in their ignorance that it works on almost every level.

Not all licensed comic books are created equal, with a majority of them lacking the authenticity to pull off an enjoyable reading experience for comics (cough*cough*Serenity*&*Firefly*Comics*cough*cough). Marvel managed to capture the lowbrow “aesthetic” of the show very well, with much of that coming from the art. They even managed to replace the reviews of music videos with hilarious reviews of Marvel characters, which turned out to be some of my favorite parts of my reread. Everything to love about the show is there (or hate, if you were a parent).

I won’t even attempt to describe each issue. For one, the stories are all self-contained. Also, like the show, the characters end up going from point A to point Z in a random and haphazard way. They end up at the dentist or wandering into a yam store or attempt to get a tattoo or wrestling large breasted women while in drag. You get the picture.

While the writers would fluctuate, the one constant on the Marvel title was the art from Rick Parker. Parker has had a storied career as a letterer at Marvel and has had art published everywhere from Time Magazine to The New York Times. His artwork goes a long way to lending the comic book its worth as an adaptation. His work really captures the Beavis and Butthead experience.

That being said, I’ll simply share a few of my favorite superhero reviews from the first five issues. 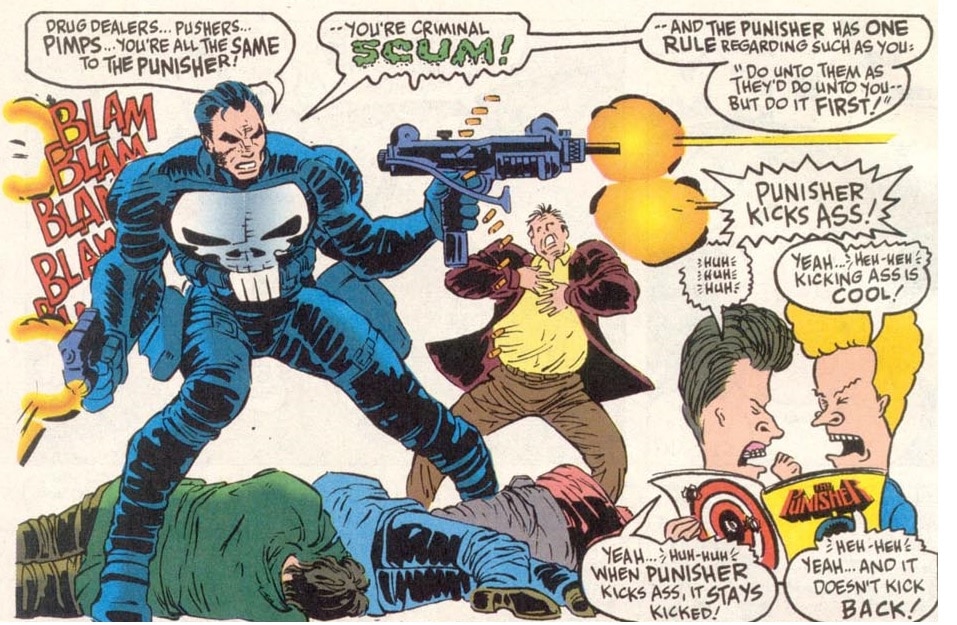 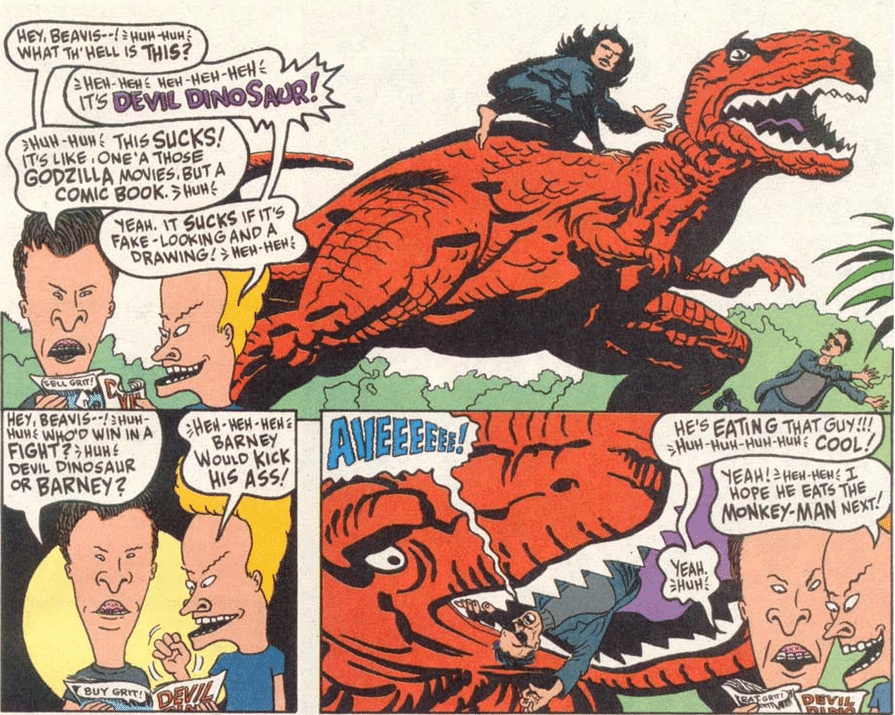 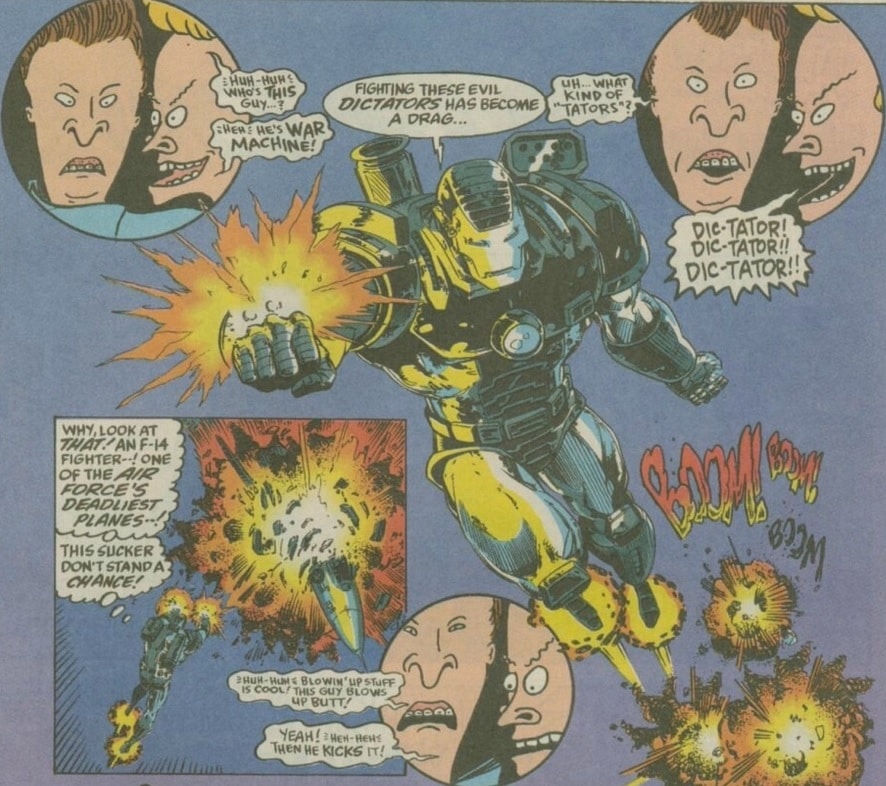 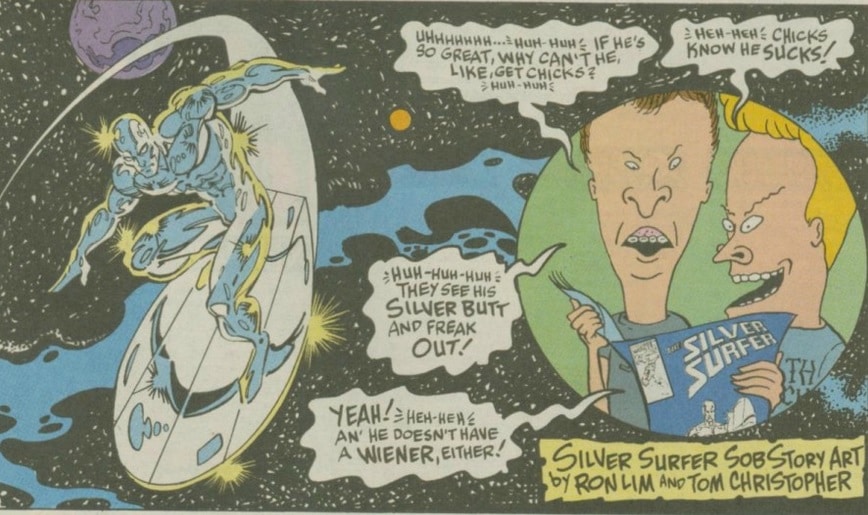 Why Should You Check it Out?

Chances are, if you’re a nerd of a certain age you have a nostalgic soft spot (huh huh, he said soft) for Beavis and Butthead. The comic books were a fun trip down memory lane for me. I imagine other teens of the 90s would get a kick out of reading these. The early issues are easy enough to find in the back issue bins, but later issues command a high price due to lower print runs, with the last ten issues or so commanding around $20 a pop. Not too shabby.

Beavis and Butthead are still around too. The cartoon was revived back in 2011, well before reviving old tv series became the cultural touchstone that it is today. Series creator Mike Judge frequently discusses bringing the two back for another film or for another series at a different network, but nothing has been developed as of 2018. Heck, I saw a Beavis and Butthead t-shirt for sale at Wal-Mart last week. Their brand of idiocy lives on!

That’s it for this week. Next week, I return to the Ultraverse to read RUNE! Cheers until then!