Welcome back to another edition of My 90s Summer! Each week, I treat myself to a book I read back in the 1990s to see how it holds up today. I would say that I’m batting at .500 right now, but I don’t know if that average can be sustained after this week.

This week, I pulled out the first four issues of Force Works. 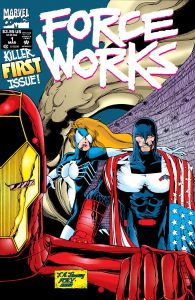 I’m going to be upfront with all eight of you reading this column (hi, Aunt Mary!): I hated this book when it came out in the 1990s. I really, really hated it. I have no clue why I lasted even four issues with this hot mess of 90s extreme, but there it is. I somehow soldiered through four entire issues of this crap before deciding my money was better spent on, I don’t know, one of the seventy X-Men titles gobbling up massive amounts of real estate on the shelf back then.

So why intentionally read a book that I know I hated? I don’t know. I thought that perhaps I missed something. Turns out, I didn’t.

Why did I even read it in the first place? Good question, but I also can’t really pinpoint the answer. In a decade known for its wonky cover gimmicks, Force Works wins the no-prize for being the dumbest. To be honest, that’s probably what sucked me in because it was dumb and so was I when it came to shameless cover gimmicks.

Force Works #1 came with a poster cover. Not a fold out cover, mind you, but a poster on the front that you had to basically rip off the cover itself. It was the 90s, so speculation was high. I guarantee that less than 2% of the people who bought this literal bad boy took the cover off. Good speculators did not want to ruin their chance to put their kids through college, so these covers remain largely unsoiled today.

Don’t believe me? Troll a dollar bin and get back to me… just don’t buy the issue!

Let’s start by setting the record straight: if you read anything Avengers in the 90s, you were a massive nerd. It basically means that you were a contrarian dead set on making your fellow comic fans shame you mercilessly. That’s right, kiddos. Take a seat and get ready for Ol’ Man Morgan to school you on a thing or two.

Despite their tentpole movie star status today, the Avengers were not the Kings and Queens of the castle over at the House of Ideas in the 1990s. That distinction was held by the X-Men. I know what you’re thinking there, you young bucks. “How could this be? The Avengers are so good right now!” The Avengers sucked. Accept it. (Editor’s note: All eight extremely loyal Avengers readers in the 90s should send all hate mail to Clave Jones).

I, like so many others, looked down upon our fellow nerds who read Avengers, but the lowliest of the low were 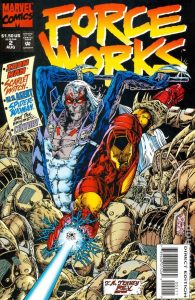 As the first issue somewhat explains, the West Coast Avengers (i.e., the suckier Avengers) had disbanded. They probably had a long look in the mirror one day, realized how terrible they were, and disassembled posthaste. Not to sit idly on the sidelines, Tony Stark forms a new team from the shambles of the West Coast Avengers (i.e., the suckier Avengers). His team ends up including Spider-Woman, USAgent, Scarlet Witch, Wonder Man (spoiler, he dies in the first issue), and a new alien-geezer-goon named Century. All team members grimace frequently. More on that below.

Force Works was established not just to handle problems and crises, but to prevent them. The first few issues deal with some sort of an alien invasion. Not before it happens. After. The crew doesn’t deal with it preemptively as their creed suggests. Basically, Force Works sucks, like the West Coast Avengers (i.e., the suckier Avengers).

They do have a cool, extreme base called (wait for it) The Works. This place has a gym and small rooms. It’s got an AI called Not-Jarvis or Plato. It also has Force Works shirts for team members to lounge around in. These t-shirts make it easier for the villains to identify heroes that could easily have their rear ends handed to them.

The t-shirt thing is all the funnier because all the characters moan on and on about how they haven’t been able to establish anything at The Works because they’ve been so busy, but they somehow have had enough time to develop t-shirts. Sweet Thanos, take these punks away.

Usually, I like to go into the story a bit more, but I’m going to stop here because no. Just no. It’s bad. Dan Abnett and Andy Lanning are great, talented individuals. This is not their best work. Best to leave it at that.

This is part of these articles where I usually point out whimsical story twists or dumb plotting. I never really make fun of the artists. I want to respect creators. I’m not going to do that now, either. However, I have to say that artist Tom Tenney drew everyone grimacing. I decided to provide four images below, collages of some of the best grimaces Force Works has to offer.

This is by no means an exhaustive or complete showing of all the pained, angry, and/or extreme faces in the first four issues. Believe it or not, I had to selectively curate. There were some stellar grimaces left on the cutting room floor. If spotting grimaces were a drinking game, Force Works readers would be dead of alcohol poisoning by the midway point of issue 2.

The first issue has the least amount of outward grimacing, but don’t discount its ability to flash some constipated looks your way when reading. Even though he dies in this first issue, this won’t be the last chance for Wonder Man to grimace in the pages of Force Works. EXTREME! 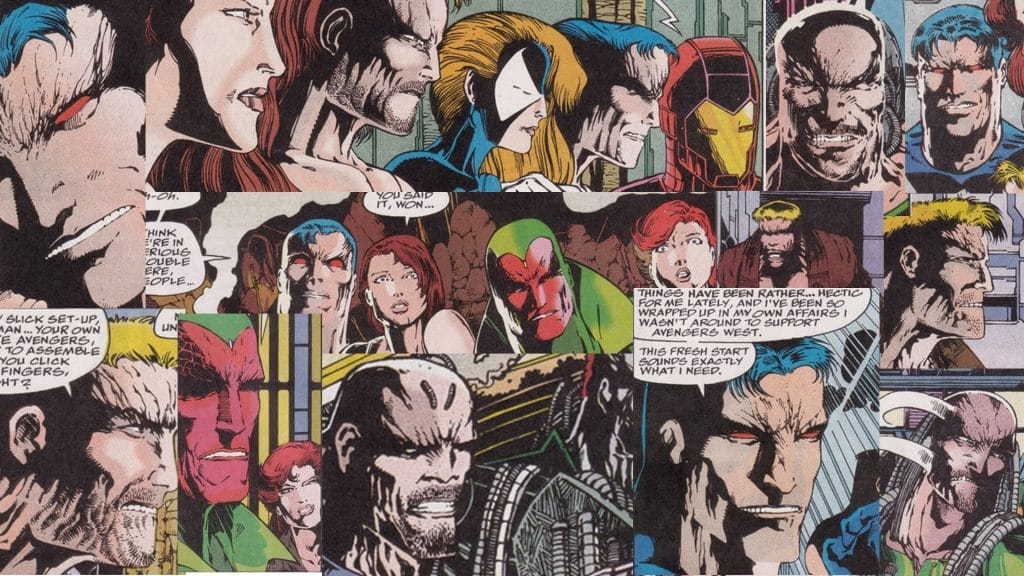 Issue #2: A Champion is Crowned?

The Oscar for Most Distinguished Grimace goes to USAgent. As a god fearing, honest, and loyal Marvel reader who righteously hated the Avengers in the 90s, I have no clue who this chump is. I mean, honestly, do you know who he is? Show of hands. I guess he’s a nastier Captain America. Willing to go the extreme!

The one thing I know about him is that all this teeth grinding is going to make a dentist very happy when it comes time to upgrade his pool or yacht. 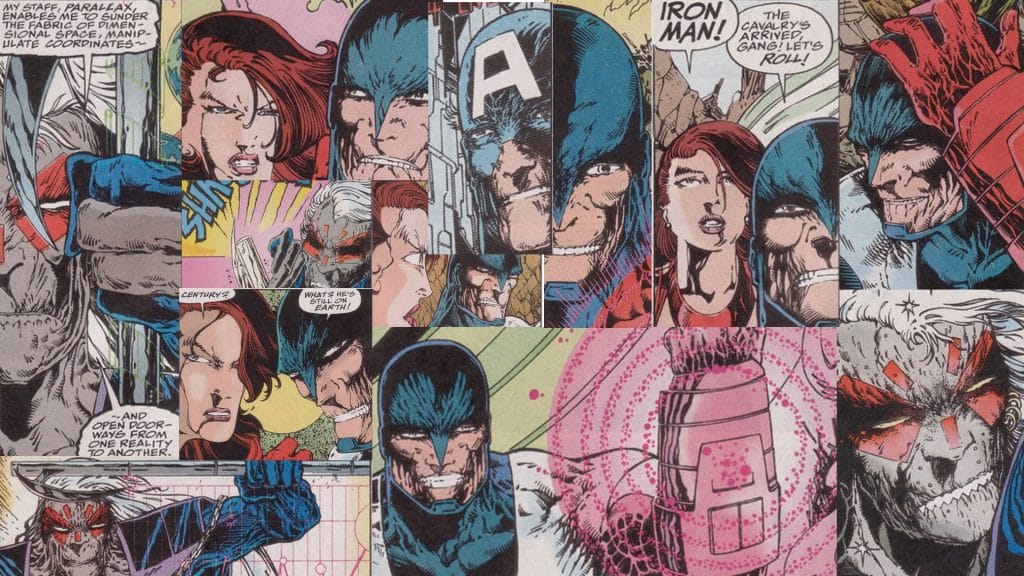 The only time Tony shows up with his mask off is in issue #3. It’s a pretty good assumption to think that he was grimacing under his mask in all the other issues. USAgent comes on strong, but the winner for this issue has to be… 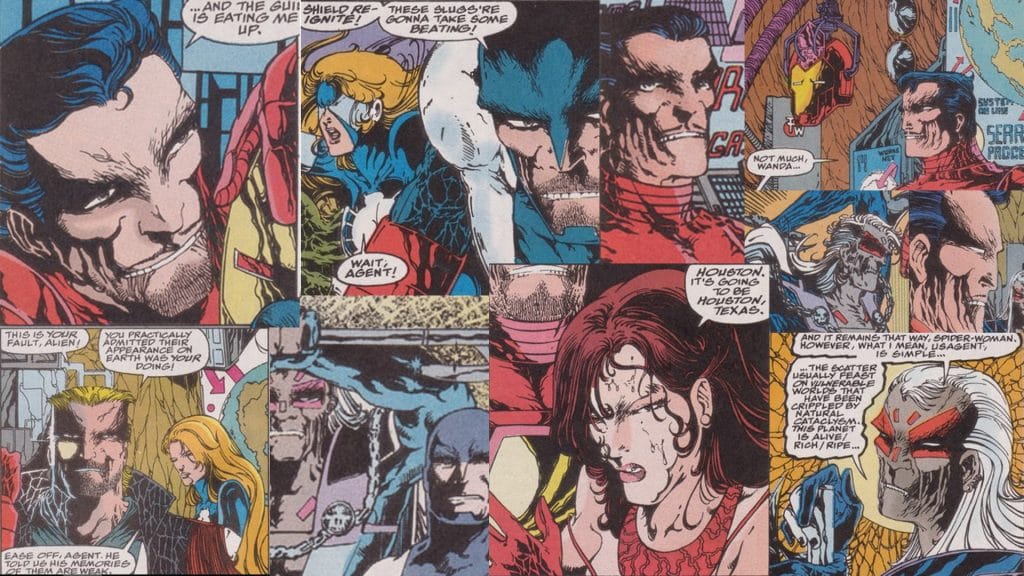 Spider-Woman gets in on the game, Wanda too, but look at USAgent! This no-name joker somehow kills it in every single panel he grits his teeth through. Such style! Such panache! Such anger! Such an overbite! 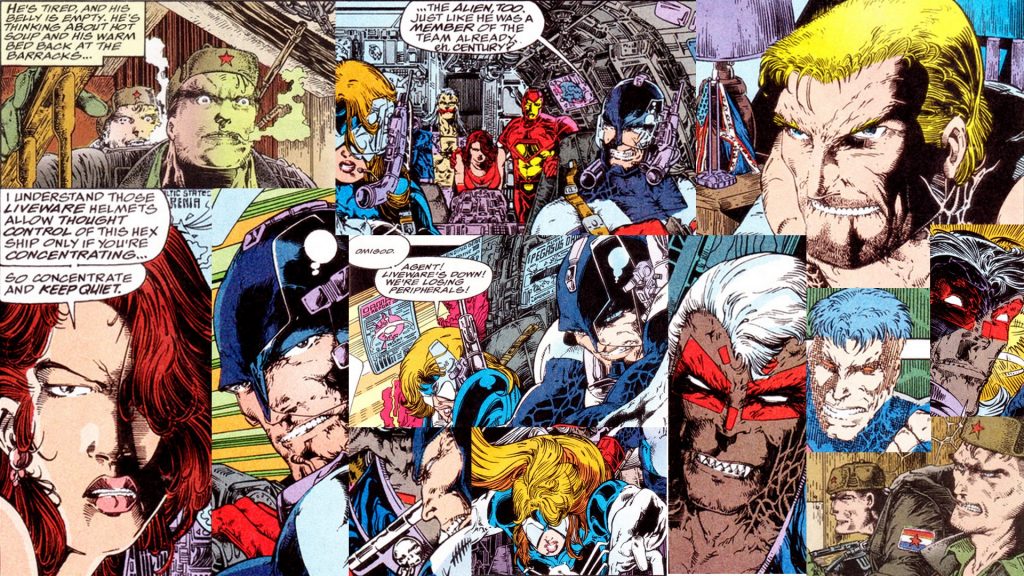 Why You Should Check It Out

Let’s say that world hunger, disease, toxic masculinity, nuclear proliferation, and maybe cyberbullying are all someday cured and you just happen to have four bucks in your pocket that could not possibly be spent on furthering the progress of humanity in any meaningful way.  Then you should check this series out.

I guess an academic exercise could persuade you to lay down your hard earned money for this, but it’s doubtful. The only reason to check this out is to maybe rip the poster off the front to show those speculative punks from the 1990s what’s what. Otherwise…There’s not much to see here.

The title lasted 22 issues, which to break it down to modern Marvel conversion standards would mean that it would last five issues in today’s market.

Next week, I hopefully move on to more titillating shores, as I will be discussing the first five issues of Marvel’s Beavis and Butthead, who actually do make a cameo in Force Works!