How to Paint Little Bears and Banthas

When it comes to painting miniatures, I’m average, and that would be a generous grade. Sure, I can get miniatures to look pretty good from a distance, but if you get close, you’ll need pretty strong beer goggles to gloss over the imperfections in the little fellas I paint.

But as a beginner, I can help you to begin. And to begin, I need to confess that I’ve discovered a secret weapon.

How to Paint Miniatures: Little Bears and Banthas 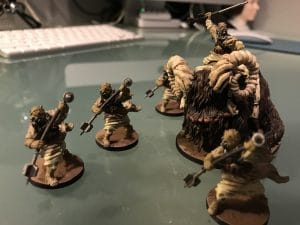 Start by painting miniatures that are forgiving. I painted Stormtroopers and Zombies to get started. Using zombies as a first painting project was perfect because they look like a dirty mess by design, so my mistakes weren’t bugs, they were features.

I recommend the same for you. You can purchase the board game Zombicide. The game is packed with really cool miniatures. It would give you a whole box of minis to practice on, plus you’d get a really fun board game to boot! Where’s the downside in this plan? (And you can get Zombicide here).

And now my secret weapon! When I started, Sorastro’s painting guides didn’t exist. When I stumbled upon them, it changed miniatures painting for me. (I was so smitten that we interviewed him and I support his Patreon.)

Sorastro produces incredibly professional painting tutorials. The are scripted and beautifully produced, with accompanying music that Sorastro writes himself. I can’t recommend them highly enough, as they will absolutely make you a better painter. Check out the below video of Sorastro’s painting tutorial for Zombicide: Black Plague.

If zombies aren’t your thing, try Star Wars. Sorastro paints through the miniatures from some of the hottest miniatures games, so it was only logical that his largest collection of tutorial videos are for the Star Wars: Imperial Assault game.

I’m an OG Star Wars fan, so it was natural that I expanded my painting skills on Stormtroopers, bounty hunters, and Chewie. Besides, Imperial Assault figures are incredibly well done, so you’ll be happy to display your finished work.

My latest Star Wars figures was a bantha and four Tusken Raiders. The bantha would actually be a nice figure to learn with, as it is one of the Imperial Assault boosters, so it is sold separately and can be had without purchasing the full game. (Get the Bantha here.)

Here is Sorastro’s video for the bantha (and for the Tusken Raiders that come with the Twin Shadows expansion):

Then start to add your skills skills together in fresh ways. Many local game shops will sell Reaper Bones, or a similar unpainted miniature that is geared toward D&D or Pathfinder. Bones minis are super inexpensive and come in a ridiculous number of poses. 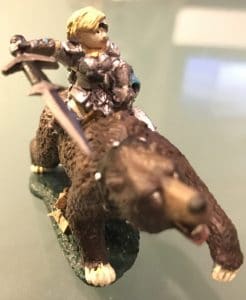 I recently spotted Bones figure that was a female dwarf who was riding a bear. But I don’t know how to painted an armored dwarf or a bear. What do do?

So I mixed and matches two painting tutorials and was able to paint something that wasn’t represented in either video. And I encourage you to try likewise! 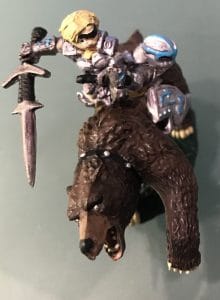 Hobby miniatures painting can seem daunting, and I agree that it’s not an easy hobby to get into. But consider the following:

I Built It: Incredible New Model Kits that Double as Cool…