Review of Zombicide: A Board Game Packed Full of Fun

If nerd culture has reached peak zombie, then why is The Walking Dead the number one televisions show and why is Cool Mini or Not pulling in over 2 million dollars Kickstarter dollars for every Zombicide game they release? Granted, zombies are over-saturated, but there is a place for really good work being done in the genre. Zombicide is one such example.

Zombicide is a board game that comes with a literal horde of little zombie miniatures. We’ll come back to that thought. 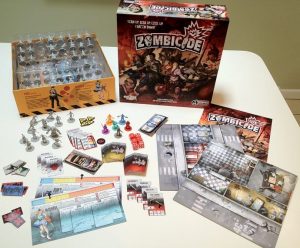 Included with the miniatures are six survivors. These are fun in that most are modeled after famous people. There is one that is a spoof of Sheldon Cooper from Big Bang Theory for example, and expansions includes survivor miniatures that resemble anyone from Chuck Norris, Santa Claus, Gordon Ramsey, or Bruce Willis.

Zombicide drips with theme. Nothing about the characters is subdued or indistinct in Zombicide and it is not meant to be. It’s over-the-top because that adds to the fun. Why be subtle when you can be stylized and dramatic, in other words.

You also get 110 mini-gaming cards, include 42 Zombie Cards, 62 Equipment cards and 6 Wound cards. There are 6 Survivor identity dashboards to help keep track of your survivor’s progress. Bottom line: there is a heaping horde of stuff in the box and some of it is among the best gaming pieces I’ve seen in a boardgame.

Zombicide is a co-operative game played solo or with up to 6 players. The rulebook has missions you set up with double-sided modular board tiles that are rearranged to create different maps. This lends a lot of replayability to the game, and additional missions are available on the Zombicide website even. The overall objective is to complete missions while surviving more and more zombies swarming the game board.

Review of Zombicide: But is it fun? 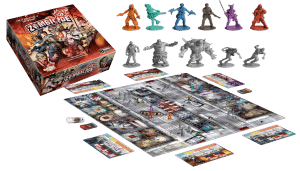 It’s some zombie slaying action. The core gameplay is scavenging for useful weapons, then using them to kill zombies like your life depends on it.

Of all the games I’ve introduced to people, Zombicide is the one that has provided the most engagement and laughs. It lends itself to having a good time. Being fully co-operative, players win or lose together and have a blast scheming and plotting their next moves. Then zombies flood the board and plans change, eliciting hoots from the players.

It’s not a perfect game. There is a rule that shots fired at a zombie automatically hit a survivor if they share a square, and we house rule that constantly. But house rules work great with Zombicide. Although it’s not the tightest game in terms of mechanics or rules, the style of game affords itself some flexibility in tweaking it to fit your play.

It gets you immersed in the action. Players feel like they are trying to survive the zombie apocalypse. And with all the chatting and planning going on, Zombicide is at its best when when an unexpected surge of zombies forces players to run a different direction.

Zombicide is worth its price for the miniatures alone, and it’s scientifically proven that it’s even more fun to play it once you’ve painted your minis. So don’t let the sticker price deter you, as Zombicide makes you feel you get more than your money’s worth.

They call each major release a “season” and there are 3 thus far, each of which is available discounted via Amazon, plus there are hordes of expansions:

What do you want from a board game other than having a good time with friends around the table? Zombicide provides that and then some.