By Michael Adkins On May 25, 2016 Last updated May 25, 2016
Share TwitterReddItPinterestFacebookEmailPrint

Ross We all have pretty significant gaps in our nerd knowledge, whether we admit it or not. Mine for the longest time, was Chris Clarmemont‘s X-Men. I had read a few issues here and there, a few issues of New Mutants, and obviously I’ve read a bunch of X-Men comics by other authors (and I’ll confess that Chuck Austen was my first exposure to the modern team). 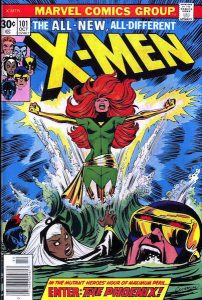 But I haven’t read any of Clarmemont’s stuff. I knew OF it–the Dark Phoenix Saga, Proteus, Wolverine in Japan–but I had never experienced it until I got a Marvel Unlimited subscription. Then I jumped in with both feet. X-Men, New Mutants, all of it.

So, that’s a long-winded intro just to build up to this question: What is it about Chris Claremont’s X-Men run that makes it so good? What is it that makes it not only stand the test of time, but live up to all the hype?

Ross Well, I still have like twelve years worth of comics to plow through.

Adkins Clave, I’m going to defer to you. I’m reading Claremont’s stuff at the same pace I’m listening to Rachel and Miles X-Plain the X-Men, so I’m just now up to the Demon Bear Saga.

Clave Well, I read each issue of Uncanny X-Men 100 times when I was 10 years old, so I’ll stick around for an AMA later. So in regards to what made the run great, I’ll crash the Internet if you get me going.

Ross The internet can take it! 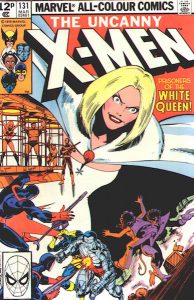 And I’m genuinely curious–it’s so cool to see where X-Men comics are now versus where they were, and I’d love to know more about what it as like to read them when they were contemporary.

Clave Claremont focused on characters, creating many of the best known in comics, in fact. He was also masterful at the long play. He’d weave stories in and out like a tactician.

Adkins His slow burn/long play is what keeps me hooked and coming back for more. I’ve got the curse of knowledge in that I know where a lot of his threads end, but seeing where they originate and following them through to fruition has been a satisfying experience.

Ross Agreed! I didn’t think I’d care so much about the Hellfire Saga, for example, but it still had a lot of punch.

Clave And Claremont would seed the story 20 issues prior. It helped that Uncanny X-Men was far and away the best selling comic in the spinner racks, so he got a long leash.

Ross I’m fascinated by that. There’s such a tendency these days for writers to “write for the trade” and stretch stories out, and a lot of times the title suffers for that. Decompression can lead lead to poor stories. But Claremont was able to have those long-term stories that coexisted with single-issue stories. It really is masterful, like you said. 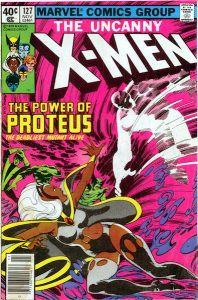 Adkins We call it masterful now, but was it considered such back when the issues were first hitting spinner racks back in the day, Clave, or were there other feelings?

Clave Uncanny X-Men was the height of comics at its time. It was a soap opera for kid nerds everywhere. His prose is so purple that it’s difficult to read in a current setting, but it was the definitive comic of the 80s. [Editor’s Note: “Purple prose” is flowery, dramatic, over-the-top wording. It makes both for excellent villain monologues and overly dramatic character moments.]

Ross I do get tired of Wolverine telling us about his Adamantium bones every time his claws come out, but on the other hand, I respect the fact that he doesn’t assume the reader is intimately familiar with the characters.

Clave Ross, have you read any storylines that are particularly fun for you?

Ross Hellfire Club, I already mentioned. Oh, the Brood! They were awesome!

Adkins The Hellfire Club stuff runs deep. It kinda felt like one of their members was behind most of the early Claremont stuff. And, of course, Emma Frost is still a major factor in X-Men stories today. 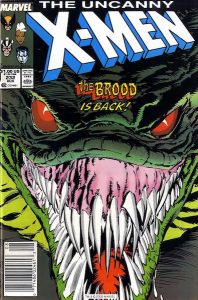 Clave The Brood is another example of what made the run great. They were totally derivative (the movie Alien was popular back when they were written), but those stories highlighted both the wild space adventures and the really personal moments that Uncanny X-Men was known for. Then Claremont would return to tropes like that and spin them in a new way, like in the Australia years.

Adkins Just proves you don’t necessarily have to reinvent the wheel in order to do something successfully.

Ross Guardians of the Galaxy, to me, says that a Starjammers movie is feasible.

I will say that the Starjammers are one of the most surprising parts of his run. The way he jumps from comedy to soap opera to ninja Noir to space opera… Impressive.

Clave Claremont was great at shifting tones without it being jarring. He was known for seamlessly shifting lineups as well, working characters in and out to give them a time in the spotlight.

Unfortunately, Fox has the rights to the X-Men (since the 90s killed the X-Men and bankrupted Marvel) and I wouldn’t trust Fox to do Starjammers well.

Adkins Starjammers is the stuff with Corsair, yeah?

Adkins I think the new Cyclops solo by Greg Rucka features that crew.

I’m not sure it has hit MU yet, but I could be wrong.

Ross You’re right. I’ve not read it either.

Clave I want to close this thing by asking if you two are familiar with the Mutant Massacre?

Ross I’m not there yet, but I’m looking forward it!

Adkins Same. I could outline it briefly, but haven’t read it in its entirety yet. 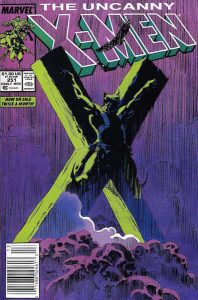 Clave It’s brilliant. It’s heartbreaking as well. It also deeply damaged characters in real ways. Comics are used to hype, yet then not following through with real consequences. Claremont took his characters to new places constantly.

But enough of us blathering. Let’s read some comics! Claremont wrote the X-Men from 1975-1991, taking over the series at issue #94, which brought in a whole new team of mutants, including Storm, Wolverine, Nightcrawler, and Colossus.

The Dark Phoenix Saga is always the #1 most recommended trade in his run, while God Loves, Man Kills is the definitive graphic novel from that period.

And the entirely of Chris Claremont’s X-Men run can be found on the Marvel Unlimited app.