In the previous articles in this series, we’ve talked almost exclusively about the rules of the Pathfinder Roleplaying Game, from how best to go about learning them, to the myriad optional rules in the various supplement books.

But there’s more to the game than just its rules.

Like any roleplaying game, Pathfinder needs a setting to apply these rules to. The characters the players create need a place to have their adventures in, a place where they can become the heroes they hope to be.

The hardcover books in the Pathfinder Roleplaying Game line of books (the ones with the specific “Pathfinder Roleplaying Game Logo” on them) are “setting neutral”, meaning that, apart from the generic trappings of fantasy (there are wizards and monsters and such) and occasional examples (such as example cleric gods in the Core Rulebook), the rules aren’t intended for any particular setting. Gamemasters need to add a setting to the rules when running their own campaigns.

Some GMs choose to create their own settings, and if this is a route you’re interested in, it can be extremely rewarding. Unfortunately, it can also be a lot of work, and GMs tend to have a lot of work already. However, there are some resources that can help you as you go about designing your world.

The GameMastery Guide has an extensive section on designing your own campaign setting, with advice on geography and culture. It looks at several broad cultural categories (such as feudal or rural/agrarian societies) to help you decide the kind of people that live in your world. It also contains advice on technology levels, creating a history and calendar for your world, and even advice on creating worlds and planes beyond the world your players’ characters come from (for those high-level PCs who use powerful magic to travel to other worlds). 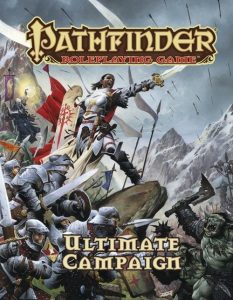 Ultimate Campaign is another book that can be extremely useful for GMs looking to expand and develop their campaign worlds. Many of the optional rules contained in this book provide ways to track the PCs’ effects on the game world as well as what the PCs can get up to in between adventures.

The “downtime” system allows PCs to run businesses, create organizations, and build buildings. It includes an easy-to-use abstract method for tracking the resources the PCs will need in order to accomplish these tasks.

Ultimate Campaign also includes extensive kingdom building rules for PCs that want to forge their own cities, countries, or empires. This includes:

To go along with the kingdom building rules, there is also a mass combat system for when the PCs’ kingdom comes into conflict with other lands, resulting in armies facing one another. The core combat system for the Pathfinder RPG is intended for small-scale combats between a handful of combatants. Attempting to run a conflict between armies using the core rules would be near impossible and would take so long as to draw the game to a complete halt.

The mass combat rules in Ultimate Combat provide a streamlined system to abstract the majority of the conflict while still allowing the PCs to perform their own feats of heroics and influence the outcome.

Ultimate Campaign can be invaluable for GMs creating their own campaign worlds, but it can be equally useful to GMs who use pre-created worlds. Indeed, many GMs choose not to create campaign worlds themselves. This can be for many reasons. Some GMs may simply have no interest in it, while others would like to but just don’t have the time. Newer GMs may feel like they don’t yet have the skills to create their own worlds, so would prefer to learn the game using an already-existing setting.

There are several premade campaign settings available out there, produced by various companies using the Pathfinder Compatibility Licence. It’s also possible to convert settings made for other games (such as Dungeons & Dragons) to Pathfinder. However, Paizo also produces its own official setting for Pathfinder: the world of Golarion (indeed, when the setting neutral books use examples, such as the previously mentioned cleric gods, they draw those examples from the Golarion setting).

There are a multitude of books available for this setting, published under the Pathfinder Campaign Setting and Pathfinder Player Companion lines. In the next article, we’ll look in more detail at the books you’ll need to get a campaign set in Golarion started.

You can purchase the Gamemastery Guide here, or Ultimate Campaign here. Thanks for reading Nerds on Earth. Please share if you’ve enjoyed something you’ve read on the site.

Revisiting Video Games of the Past: Diablo 3