Mash-ups can be weird. Cowboys and aliens just might not mix well, you know? So Wizards of the Coast were taking a risk with their latest hardcover book release, Volo’s Guide to Monsters.

I gotta say, Volo’s Guide is a mash-up on par with peanut butter and chocolate.

Review of Volo’s Guide to Monsters 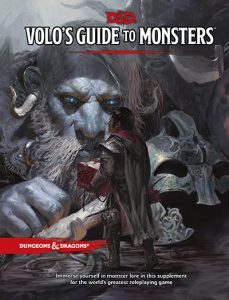 Volo’s Guide is divided into 3 chapters, plus several useful appendices. Chapter 1: Monster Lore is roughly the first 100 pages of the book and it takes you deep into some of the iconic monsters from the history of dungeons and dragons. Just look at this rogues gallery: Beholders, Giants, Gnolls, Goblins, Hags, Kobolds, Mind Flayers, Orcs, and Yuan-ti.

Each of those creatures got a deep dive into what makes them tick. Every page is thoughtful work; it goes well beyond reducing the monsters to a simple stat block. The creature’s motivations and paranoias are beautifully explored.

If you want complex villains and nuanced encounters in your D&D games, then the first 100 pages of Volo’s Guide will be pure gold to you. And it’s not just heady stuff; it’s darned interesting and entertaining to read. Did you know that cloud giants are avid gardeners and, during times of drought, they’ll oft share their enormous yields to ease human’s food shortages? Suddenly D&D and tales of giant beanstalks and magic beans get a mash-up as well.

Volo’s Guide shares fun tidbits like what giants carry in their bags (potentially a halfling!), plus nuggets like the Xanthat Guild in Waterdeep is run by a beholder, which are fun story hooks to help DMs create fun D&D campaigns and storylines.

The monster lore section of Volo’s Guide is also a reminder that D&D is the OG when it comes to roleplaying games and fantasy in general. Sure, other properties might have their versions of orcs and goblins, but when you read the lore section of Volo’s Guide it’s a crystalline reminder that D&D is D&D, man, and you accept those sucker substitutes at your peril.

The first 100 pages of Volo’s Guide bring the best old school ore of D&D forward from editions past. This makes this book (and 5e) an excellent onramp for new players, while still warming the hearts of the grognards. New fans aren’t encumbered by a splat of complicated continuity, yet old fans see the monsters of D&D that they’ve always loved. The D&D team is to commended, if just for the first chapter alone.

Chapter 2: Character Races is the D&D team’s attempt to feed the masses what they’ve wanted. It opens with the words, “Heroes come in many shapes and sizes,” and included are full tools needed to make D&D characters from new races such as aasimar, firbolg, goliath, kenku, lizardfolk, tabaxi, triton, and even some more monstrous races like orc and goblin.

I think the biggest compliment I can offer for this middle section of Volo’s Guide is that after each and every one of these races I immediately had a desire to roll a brand new character. There wasn’t a single bad apple in the barrel.

Let me hit a few highlights. The aasimar have a touch of heavenly power, so they are champions of absolute good. But Volo’s Guide also has some sub-types of aasimar, each of which is interesting. And what’s true for the aasimar is true for each of the new races. Each has a distinct point of view that helps with roleplaying.

Firbolgs are the gentle socialists of D&D. They eat Ben and Jerry’s as they spend quiet days caring for the least of the forest creatures. Volo’s Guide says that “the firbolgs presence is marked by an absence of animals and a strange quiet…”, but my guess is there will be a lot of filbolgs characters created that are named Groot.

Speaking of Groot, lizardfolk are the Drax of D&D. Volo’s Guide describes them as alien and hyper literal. Their feelings revolve around fear, aggression, and pleasure, meaning you know there is that guy in your group that is already thinking of rolling one.

Tritons are like Aquaman, except they are also haughty like the Sub-Mariner, so my guess is that Tritons prefer blondes. But my favorite might be the tabaxi, the feline race from Maztica. Mark my words here as well: Volo’s Guide drops several clues for a future Maztica storyline, so one is coming.

As I finished my read through the new races, I was struck at the depth and nuance to the writing of Volo’s Guide to Monsters. You don’t get the measure of the book by simply recounting the table of contents. It’s a wonderful book, and we’ve still have nearly 100 pages to review.

Chapter 3: Bestiary is exactly what you’d expect: more monsters for your D&D adventures. The artwork is superb and each entry is wonderfully laid out, but the monster section is much more than 100 more creatures to flip through.

The D&D team took care to make this book incredibly useful and usable. It’s useful because many of the greatest hits monsters are pulled from editions past and given fresh coat of paint. There are fey and Sea Spawn, Flail Snails and Froghemoths. (Actually, there are several “froggy” type creatures, which is a bit bemusing.)

More varieties of the creatures from chapter one are listed with full stat blocks. Whereas the lore chapter helped you roleplay them, the bestiary chapter let’s you roll initiative. And there are lots of monsters for a DM to use immediately.

The D&D team made the bestiary usable as well. Appendices sort by challenge rating, environment, and type. There is also a slew of new NPCs statted out. Volo’s Guide is a book that will frequently be pulled off the shelf and used.

Let’s end this talking about the name. Volo is a character with a lot of D&D history. Much of the marketing material hyped up the fact that the book is written as a travel guide through the eyes of Volo, with counter commentary from Elminster, another famed D&D character. In reality, this aspect is not much more than a few quotes here and there. They are interesting, but marketing overhyped that aspect somewhat, as overall Volo’s guide reads like the rest of the books in the D&D 5e line. (Not a bad thing.)

I can wholeheartedly recommend Volo’s Guide to Monsters and there is nary a significant nit for me to pick about this book. What’s more, the D&D team scored a coup in that the way a monster book is mashed-up with a lore book and a new race guide. This makes Volo’s Guide a purchase that is good for both players and DMs alike.

It’s a clever book and well thought out. I bet future books will be Elmister’s Guide to Heroes or some other such thing, and will add new classes, spells, and the like. After reading Volo’s Guide cover to cover, I can’t imagine D&D ever going back to a model where they release a Player’s Handbook and a Monster Manual, then follow it with the inevitable Player’s Handbook 2 and Monster Manual 2.

They took a creative approach with Volo’s Guide and it paid off in a big way. I give it 9.5 out of 10 nerds. You can get Volo’s Guide here for a nice price.

[Disclosure: Wizards of the Coast sent Nerds on Earth a complimentary copy of Volo’s Guide to Monsters for review.]