When Disney, who already owned Marvel Comics, made the bid to acquire all the Lucasfilm assets, including Star Wars, it created an interesting dilemma. Star Wars was a story built to have larger stories told in a comic format. The combination of space, Jedis and other visuals, combined with a compelling universe with lots of back story to explore meant that comics and Star Wars were a natural fit.

In fact, in the 1980s, Marvel itself had produced and published a variety of Star Wars comics, to varying levels of critical success. 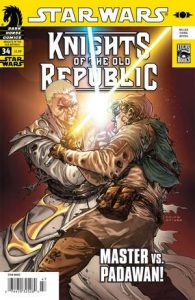 In 1991, a 5 year old comic publisher, Dark Horse Comics, took over the Star Wars rights and began to publish a prolific amount of Star Wars comics. They forged new stories stemming out of the movies, as well as tangential projects like Knights of the Old Republic, set 4000 years in the past before the Star Wars movie era we all know.

Because of how the contract was structured, when Disney moved the license over to its own comic house at Marvel, Dark Horse lost not just the rights to future Star Wars stories but also the rights to the previous stories it published. (In retrospect, for the then 5 year old company, signing away those rights just to have a chance at Star Wars stories was probably worth it, but you would think at some point, someone would have re-negotiated.)

However, those stories have not faded away and Marvel has the publishing rights. And it has been steadily adding some of the best of the Dark Horse Star Wars stories to the Marvel Unlimited platform, meaning that these stories are not lost to the ether. Here are a few of the storylines that are worth checking out on the app (or potentially in used trade paperbacks). 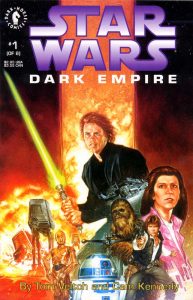 Dark Empire. The very first story that Dark Horse story focused on this question: what if Luke Skywalker did embrace the Dark Side? Set post-Return of the Jedi, this story likely seems less impactful to modern audiences, who watch as Anakin slowly went down the dark path in the prequel movies. But in the early 1990s, someone exploring Luke as a Dark Jedi was revolutionary. It was later followed up and advanced in Dark Empire II and Dark Empire III.

X-Wing Rogue Squadron.  I had a friend once tell me that he didn’t like the Jedi parts of Star Wars and much preferred the space battles parts. After building a better friend filtering system, I realized that the Star Wars universe was big enough for each of us to get what we needed from it. If I had known about Rogue Squadron, I would have referred my friend to this series, which is much more centered on the spaces battles and the crews that fight them. 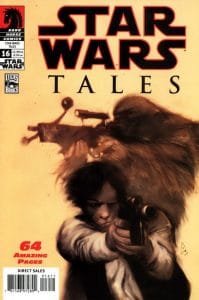 Star Wars Tales. When an entire generation embraces something as deeply as Star Wars was embraced at its release, those kids grow up to be adults, some of whom turn out to be amazing creators. And in an attempt to let everyone who wanted to tell a Star Wars tale, this anthology book was created. You can find all kinds of great one-shot gems in the back issues.

Knights of the Old Republic. I loved the video game series by the same name so I have been slowly reading this story, set in a similar era, years before the movies. It has a feel that the Jedis are just coming to be and working out who they are and what they want to be. It is an interesting read.

Star Wars Legacy. The 2nd Volume of Legacy tells the tale of one of Han SOlo’s future dependents. You could see loose threads of it were picked up in The Force Awakens. We wrote more about it here.

We have written before about how there is essentially no easy way to know what is and what isn’t Star Wars canon anymore, but there are definitely some old Star Wars comics worth checking out and Marvel Unlimited is an excellent way to explore the old Dark Horse catalog.