Torchwood was the first successful Doctor Who spin-off (the very first spin-off was the 1981 series, K-9 and Company, which lasted for only one pilot episode). It follows the adventures of Captain Jack Harkness (John Barrowman), a former companion of the Doctor, as he leads a group called Torchwood against alien threats.

The organization Torchwood first appeared in Series 2 of the new Doctor Who. It was a paramilitary organization formed originally by Queen Victoria to protect Britain against extra-terrestrial threats—including the Doctor—and seize any technology for Britain’s exclusive use.

When the Doctor defeats Torchwood in the early 21st Century, Captain Jack takes control of the remnants of the organization in order to turn it into a force for good, one meant to honour the Doctor, rather than fight against him. Based in Cardiff, Wales, Jack’s Torchwood has to contend with the strange things that come through the time rift located there (another thing originally established on Doctor Who).

Jack is joined by:

Whereas Doctor Who is aimed at a family audience of all ages, Torchwood is aimed at an adult audience, allowing it to tackle topics not generally appropriate for children. This means that the series has swearing, occasional partial nudity, frank discussions of sex, and more graphic violence than its parent show.

Unfortunately, early on, Torchwood does fall into the trap that many so-called “adult” shows fall into: that of being somewhat juvenile about its adult topics. The obligatory sex alien storyline shows up in only the second episode, for example. On top of this, some of the principal characters are not very likeable at first.

However, it’s worth sticking with the show, as it soon gets better. The first season is 13 episodes, and some of the later ones start to become very good. “Random Shoes” (episode 9), “Out of Time” (episode 10), and “Captain Jack Harkness” (episode 12) are the highlights of the season, and make the early episodes worth it. 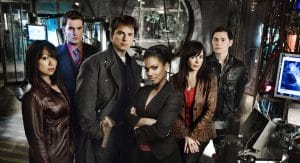 The second season (also 13 episodes) is when Torchwood really starts to find itself. The show has developed its own distinct identity by this point and has some great episodes. Freema Agyeman guest starts in several episodes as Martha Jones, another former companion of the Doctor. James Marsters (best known as Spike on Buffy, the Vampire Slayer) also guest stars in several episodes as the villainous Captain John Hart, a former associate of Captain Jack. 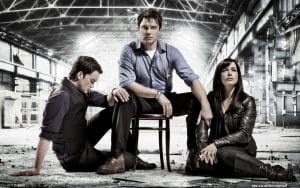 “Children of Earth” is phenomenal storytelling. It’s exciting, emotional, and intense. Very intense. I once saw watching “Children of Earth” described as being like having your heart torn out, stomped on, cut into little bits, force-fed back to you, and then torn out all over again (apologies, I can’t remember where I saw this to give appropriate credit). It’s simply that emotional. But it’s worth it.

“Children of Earth” also guest stars Peter Capaldi as John Frobisher. Capaldi, of course, would later be cast as the 12th Doctor on Doctor Who, making for an interesting overlap of character appearances in the “Whoniverse”. 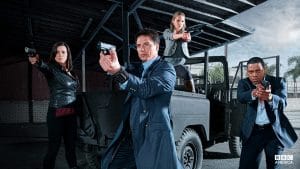 Torchwood’s fourth season was a co-production between the BBC and the American network, Starz. It follows a similar format to the third season, in that it tells a single story titled “Miracle Day”. However, it is ten episodes long instead of five. It also introduces several new cast members to replace characters who have died in the previous seasons. These include Rex Matheson (Mekhi Phifer) and Esther Drummond (Alexa Havins). Bill Pullman guest stars as the criminal Oswald Danes.

“Miracle Day” has something of a poor reputation, although it’s not as bad as it’s generally made out to be. Its main problem is that it’s too long. As such, it starts out very strong, but becomes weaker towards the end (although episode 7 is amazing). It also has the problem of coming right after “Children of Earth”, meaning that people naturally compare the two stories, and “Miracle Day” simply can’t compete. That said, there’s a lot of good stuff in “Miracle Day” and it’s worth watching.

To date, there have been no further seasons of Torchwood (“Miracle Day” first aired in summer 2011), though there is occasional talk of bringing it back. There have also been several radio play productions starring the original cast.

While Torchwood certainly has its ups and downs, overall it’s a great series (especially “Children of Earth”) and you should certainly check it out if you haven’t seen it.