Dungeons and Dragons: The Bloody Gnolls Ate My Baby

To all you makers, mad scientists, hackers, alchemists, or celebrity chefs out there, if you are looking for a recipe, here’s the recipe for cooking up a Gnoll at home:

First, you drink the tablespoon of horror, simply to satisfy your thirst for evil, then you feed demon flesh to a rapid pack of hyenas, fusing the essence of the demons with the animals. Legends say that this will give rise to a Gnoll, a 7 foot tall, 300 pound creature that revels in the hunt and lets loose with haunting laughter, just as the demon prince Yeenoghu hoped they would.

Gnolls are brutally savage and unforgiving. And when they kill? It’s it’s not for the purpose of conquest, it’s simply because cruelty and bloodshed are a source of joy for them.

*Ahem.* It’s no wonder that the gnoll has long been one of the iconic creatures of Dungeons and Dragons, that has also spread into other geek fare like World of Warcraft. So let’s rewind briefly and flesh out the history of these hyena humanoids.

A Brief History of Gnolls 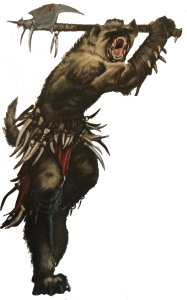 Paul Haynie literally wrote the book on gnolls, and he claims that gnolls were introduced in 1912 by Lord Dunsany in “How Nuth Would Have Practiced His Art Upon the Gnoles“, the name likely derived from the English noll. Lord Dunsany’s gnoles were simply a stepping stone for the next iteration.

In 1974, in the D&D “White Box” Gary Gygax said this about the gnoll: “A cross between gnomes and trolls (…perhaps, Lord Dunsany did not really make it all that clear). Otherwise they are similar to hobgoblins…”

But this iteration lasted only a couple of years. The 1977 Advanced Dungeons & Dragons Monster Manual described gnolls as hyena-men. In later years (2008) the Yeenoghu legend was introduced in Dragon Magazine #367, and there have certainly been other additions of flavor added here and there along the way, but it’s this core idea of savage hyena-men that has persisted to this day.

Gnoll Lore: What else is interesting?

But just because we’ve established the gist of the gnoll as hyena-humanoids, it doesn’t mean I won’t give you some more savory morsels. How about these 4 pieces of gnoll lore: 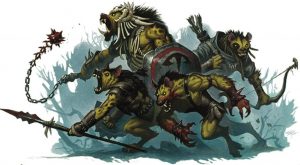 The gnoll is a pretty straight-forward creature, so perhaps that’s why it has had such a lasting legacy, never in the spotlight, but always milling about in the background of nerd culture among RPGs, books, and video games.

The gnoll takes an interesting creature like the laughing hyenas of Africa and keeps the carnivorous pack hunting and spotted canine appearance, yet really dials it up and makes it something fierce and memorable in geek gaming culture. The gnolls were created to be something else to throw at players bored with orcs and hobgoblins, but they’ve settled into something memorable on thier own.

Thanks for reading. If you’ve enjoyed Nerds on Earth, please consider spreading the word by using the social media buttons just below.

How Real is Your Science Fiction?