All Image Comics publishes are #1 issues. I asked Robert Kirkland a question on his AMA and the next day there was a Speedy Courier at my door with a contract for me to write my own Image Comics #1 issue. That’s how many #1 issues are published my Image Comics.

But then, something caught my eye. A #1 issue written and drawn by Gabriel Hardman. I took the bait. After reading just a few pages I was being reeled in – hook, line, and sinker.

Breaking Bad meets Blade Runner. Arthur McBride’s planetary regime has fallen. His story is over. That is until reporter Croger Babb discovers the journal of Arthur’s cousin, Maia. Inside is the violent, audacious hidden history of the legendary freedom fighter. Erased from the official record, Maia alone knows how dangerous her cousin really is…

I didn’t write the above text; it comes straight from the marketing text for the first issue of Invisible Republic. (I did write that opening bit about a writing my own #1 at Image…and regret it. I needed a lede.  And, sadly, that’s the best I’ve got.)

After the end of the Mallory regime, a disgraced novelist, Croger Babb, is trying to learn what he can when he stumbles upon the diary of a mysterious woman, Maia Reveron. It’s cliché to tell your story as a reporter looking for the story. In fact, you can feed a family of 5 for a week on a cliché that sized. But, whatever, it ABSOLUTELY WORKS.

With very little explained to us at the start of Invisible Republic, we’re thrown into it, forced to pick up what we can as we go through it. This parallels excellently with Babb who is trying to achieve the same goal as the reader. This makes the comic engaging as we’re picking up information as Babb does, rather than through long-winded exposition.

This switches posthaste when we enter the diary story, but it’s equally effective. The diary portion of the narrative takes on a personal, human tone that gives the story an emotional core outside the world building element. As the comic unfolds, readers find out how the stories are linked and it sells you on the comic.

This will come as no surprise to those who read Corinna Bechko’s criminally underrated Star Wars: Legacy, because she’s legit. Bechko co-plots Invisble Republic with hubby Gabriel Hardman, who also draws the book.

Invisible Republic takes place in the year is 2843 on Avalon, a backwater moon colony. I asked Siri where that is and she routed me to Mankato, Minnesota, but no worries, because Hardman does an excellent job creating a believable sci-fi world, which is hard, man.

But Hardman, as usual, makes it looks easy. You can almost smell the dirty, derelict streets or the salty sea air. Harman’s art is realistic, gritty, and earthy, even as it depicts as rich, futuristic landscape. It’s stunning, while also clearly and wonderfully complementing the story.

Jordan Boyd is certainly no chump on color, either. The Babb and diary scenes have a slightly different color palettes, which both helps the storytelling and is beautiful to look at.

The futuristic dystopian landscape is a derivative setting, akin to Fallout and others in that genre, but it’s crafted to perfection by Hardman and Boyd, who make it feel like a real place where people are scraping to get by. I hope Neil Blomkamp is reading Invisible Republic because I want to see this world on the big screen.

Through the pacing of the comic, it’s clear that Hardman and Bechko are in this for the long haul as the events of issue #1 unfold slowly, but to perfect effect. The plot, atmosphere, and characters are built slowly and skillfully. This might not appeal to the buying habits of a generation of short attention span readers, but I get the sense that this comic book is geared for those who enjoy a skillful, thought provoking read. Invisible Republic is billed as “poli sci-fi” and that stuff has to breathe.

Invisible Republic has a broad scope told through a tiny, human conflict. Invisible Republic is a big tethered science fiction story, but one where the spaceships feel like the least important part of the story. Siri comically insists that 2843 Avalon is in the Midwest and maybe that’s not too far off base. After all, Invisible Republic is about exposing secrets and politics, which is a story that could take place at any time or any place. 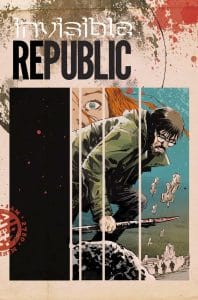 The most popular comics, music, and movies are rarely the best. (Seriously, China, stop watching Transformers, because you’re guaranteeing sequels.)

“Best” is rarely the same as “popular.” This means that if you want to find the best comics out there, you’re going to have to avoid the distraction of letting the market decide your purchases. I know that capes and tights are popular and sell the most comics, but I’m here to tell you that Invisible Republic is a real hidden gem.

I’ve since read issues 2-4 and Invisible Republic continues to amaze. It’s a slow burn, but it’s engaging in where it appears it is going. I still look forward to the next issue, which is the ultimate praise of any monthly comic.

Second, I’d be remiss if I didn’t mention the essays and creator thoughts in the back few pages. They are adding interesting and world building thoughts, much like is done in Lazarus. I love it when creators add those.

Thanks for reading. If you’ve enjoyed Nerds on Earth, please help us spread the word using the social media buttons just below.

Dungeons and Dragons: The Bloody Gnolls Ate My Baby