I picked up a copy of Medieval Punishments: An Illustrated History of Torture by William Andrews at a local book sale last week, and I can’t honestly say why. I had never taken an interest in its subject matter previously.

Regardless, I devoured the book. Andrews collated a lot of anecdotes and records dating back hundreds of years and every ounce of it is fascinating! And we here at Nerds on Earth have a long history of finding great RPG inspiration from the real world, so you might have guessed where this post is going.

The book opens with the history of hanging as a capital punishment and then shifts to the practice of gibbeting, which is where we’re going to draw our inspiration.

What in the World is Gibbeting?

Gibbeting was primarily a means of crime deterrence in which executed criminals’ bodies would be placed on display in a cage that typically consisted of iron bands and chains.

There are a lot of interesting practices surrounding this process:

A Couple of Interesting Cases (And Accompanying Adventure Hooks)

In 1742, John Breads was hung and subsequently gibbeted for murder. The gruesome memorial of his crimes stood for years until all of his remains had dropped from the cage…with the exception of the upper half of his skull which had remained detained within the receptacle for his head! The photo to the right is an artist’s rendering of the actual preserved gibbet and remains which are kept at Rye Town Hall in Sussex, England.

This is a fun setup for the old tried and true zombie bursting from the ground encounter. The party stumbles across the gibbet with its skull still lodged at the top and during the investigation – BOOM! A petrified hand erupts from the ground beneath their feet followed by the headless remains of the unfortunate soul!

Mix things up a bit by treating that remaining bit of skull kinda like a lich’s phylactery such that if the party doesn’t destroy that bit of skull..the creature regenerates and continues to aggressively defend his gibbet!

This encounter rings kinda hollow without the backstory, so get this into the party’s hands somehow. Maybe post a guard near (but not too near!) the gibbet who tells the story of the criminal and warns the party of the vengeful corpse. Have that guard refuse access to the gibbet without signed orders from some local official, sheriff, or guard captain, and make sure he says the party’s efforts will prove fruitless because “He comes back…He always comes back.  We can’t sort it out.” That’s why there’s always a posted guard: To keep people from disturbing the gibbet and calling forth its dead guardian.

Or try John Grinrod’s story out! In 1758 he was hanged and gibbeted for poisoning his wife and two children. Soon thereafter the local population coined the following limerick about the dead man and his cage:

“That the wretch in his chains, each night took the pains, to come down from the gibbet – and walk.”

Treat the rhyme almost like a child’s fairytale that kids run around singing happily. If the party asks the kids themselves about it, they say their parents taught them the rhyme to try and scare them away from approaching the gibbet (the kids might just call it “the cage”) in town. They might even say that they knew a kid that the deceased man “got” but its impossible to tell if thats a truth or a lie sold as a truth to the kids by their parents to amp up the fear factor. 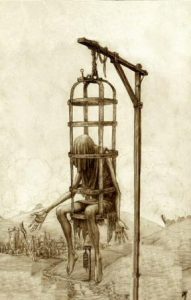 If any adult in town is asked about it, they say its no fairytale. Might even be that they bump into someone who swears he or she saw the spirit himself walking around in the very clothes he watched rot off of his corpse years ago.

If the party posts up overnight, they too see the apparition! He could be a Specter or a Ghost depending on the party’s level. He speaks common and expresses outrage at the way his corpse was handled after hanging. He reveals that he was the first to ever be gibbeted in the town…and also the last.

The townsfolk were so ashamed of the spectacle that they outlawed the practice after performing it on him. They tried to take the gibbet down, but he won’t let them. He wants it to stand as an everlasting reminder of their great shame.

The party can find out either from townsfolk, the apparition, or both that he has indeed taken several lives over the years. It’s up the to the party to leave things as they are as a continued reminder of the town’s shameful practice, or go through the apparition to tear down his gibbet and put an end to his haunt.

I’ve a feeling that this book will provide me with more encounter ideas as I read on, and you can bet that I’ll share them as they come! Until then, use the gibbet as a gruesome element of your campaign’s setting. Just pick a town, plant the gibbet, and build a story around it.  An encounter isn’t even necessary!  The device and a description of its use is chilling enough to stand out.