We’ve all rolled abysmally low initiatives at some point during our RPG careers.  This is especially painful when you’re the type that just wants to run in and hit things.  Now I have to wait even longer?!  You’re killing me, Smalls!

Listen:  Sometimes, thems just the breaks.  From a flavor standpoint, it may just be that your character was caught off guard or momentarily hesitated.  Write it off and explain it away however you will, you rolled low and have to wait your turn.

But what happens when you roll high and it actually cripples your turn – and possibly everyone else’s? 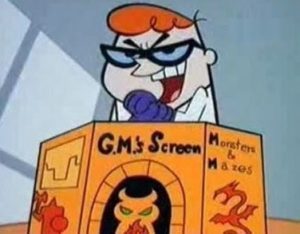 This past weekend, some friends and I wrapped up the Lost Mines of Phandelver.  As we made our way to the room in which the final battle would take place, we were moving double- or single-file through the hallway.  When we opened the door, there was a very brief RP exchange before the DM exclaimed those sweet, sweet words:

We all did so dutifully..but we immediately ran into a cumbersome problem:  The PCs with the highest initiative rolls were furthest away from the door and those with the lowest were blocking the hall and the door itself.

I suggested that the folks at the rear Delay their turn until those at the front had cleared the way.  This would prevent them from spending their turn moving through occupied spaces at half speed only to end up further clogging the hallway ahead.

Only one problem:  There is no Delay action in 5e.

It was likely removed due to its ease of abuse.  Characters could intentionally sandbag or Delay their turn in initiative in order to swarm or mob enemies.  This abuse was largely “meta.”  Would your character really ignore immanent threats to his or her well being in order to stage a Ricky Bobby/Cal Naughton Jr Shake-N-Bake scenario?  Only if they knew their partner in crime would move in initiative before that threat so they could neutralize it before it could act.

I’m not knocking the one-two punch or combo moves.  They are awesome when they happen!  Remember in the first Avengers movie when everyone was fighting the Chitauri individually and then this happens:

They didn’t call that play from the huddle, guys.  It just happened organically and thats part of what made it awesome.

Last time the NoE crew played some Starfinder, my Gray Technomancer spent the first round casting Supercharge Weapon on his Azimuth Laser Rifle.  On top of that, my plan the next round was to use my move to activate my Magic Hack (Empowered Weapon) to up the damage by another d6 (that would bring the damage roll to 1d8+5d6, for those keeping up at home) before firing.  Additionally, I was level 3 and so had Weapon Specialization (longarms) so go ahead and tack an additional 3 damage onto that.  You know, for good measure.

I was going to channel my inner Rocket Raccoon and blow the bad guy to smithereens.  Nobody knew my plan.  I didn’t even announce during my first round that I was casting a spell.  I literally said, “You look over at Sai, and he’s running his hand over his gun from barrel to butt.  He looks like he’s talking to it quietly.”

So when one of my allies intentionally stepped into melee with the bad guy to give me the bonuses from Coordinated Shot – again, having absolutely no clue what I was planning – it was perfect synergy.  I was nervous I’d miss (and it stinks to miss after eating up two spell slots for Supercharge Weapon and Empowered Weapon), but he gave me some bonuses to hit.  We didn’t hash it out; it just developed.  There is just a certain level of beauty and excitement to spontaneous coordination that is missing when you strategize everything to death!

RAW:  We Could Ready

Alternatively, we could have taken the Ready action, each of us stating that the trigger for our movement would be the clearing of the hallway.  That’s all well and good, but who knows when that’s going to happen.  The combat could evolve in such a way that makes it difficult or dangerous for those at the front of the hallway to clear out.  Then we’d be stuck and would have wasted a turn entirely.

The Delay action at the very least would have still left us with the option to move up at half speed in the worst case scenario.

Our DM was gracious and permitted the off-book Delay.  It worked well enough, but that also meant that initiative order shifted entirely between Round 1 and Round 2.

What if in circumstances like these you, as a benevolent DM, allowed the PCs to simply exchange their initiative rolls amongst themselves?  Everyone would still roll a d20 and add their mods, but then they could communally decide who uses which roll. 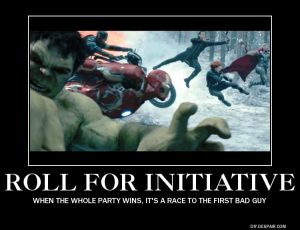 This would do two things:

It is a blending of standard initiative and narrative initiative without the added difficulty of operating outside of an organized numbers system.  In a circumstance like the one we were in, it would prevent half the group from having to waste Readied Actions or declare the off-book Delay action to then later take their turn after things developed.  This streamlines things a bit in a system when combat can be guilty of unfolding rather slowly (there’s a post on this coming later!).

It would also limit the ability of PCs to stagger their initiative in such a way as to abuse the system.  They would have to justify to the DM their choice of order, and it would depend entirely on his or her understanding of your expressed need for the change in the system.

I think it would only be fair, too, for the DM to have the option to swap initiatives for his or her monsters when the PCs call in the favor.  And that it should only ever be PC initiated; i.e. the DM shouldn’t be able to force it upon the group, but he or she will, of course, have final say as to whether it is appropriate or not to utilize the system in any given situation.

What Do You Think?

Not every hallway, doorway, or other difficult or confining terrain would necessarily fit the bill for such a change, but sometimes it just makes some sense for folks on both sides of the screen.  Initiative is still rolled, calculated, and adhered to (descending order) as usual, its just that the names get shuffled a bit before the first turn begins.  It is a good blend of or balance between narrative initiative and traditional or standard initiative.

So long as both parties agree, I could see this working favorably for all at the table.  But, as I said, it should also happen very rarely.  I’d allow it at my table.  Would you?  What tweaks would you recommend?  Or would you just rather stick to RAW?  Let us know in the comments to this post on our Character Sheets Facebook Group.