I’m a big fan of good storytelling.  That is a huge part of why I love a great book, a solid comic, a stellar movie, and increasingly – Dungeons and Dragons.

Growing up, I had heard others speak of DnD and I shuddered.  A board game you played for days?  I could barely handle a couple hours of Monopoly without having withdrawals from either the outdoors or a video game controller!  Thankfully, some trusted friends taught me better and my interest grew.

Then last year I rolled my first character: a lightfoot halfling rogue.  Sadly, he languishes at low levels, but I’ve been listening to some actual play podcasts that have me jonesing to dust off my rogue and get back to adventuring.

Everyone who sat down with character sheets that day was a noob just like me.  We went around the table and introduced one another to our characters.  Most everybody had a very simple backstory.  For instance, one of our rangers’ backstory was something along the lines of: He grew up in the woods hunting, so he’s good with a bow.  His dad taught him everything he knows about survival, woodcraft, and self defense.

I did a bit more with Viag’s, my lightfoot halfling rogue.

Viag was born to a bitch and an abuser and inherited the worst of both.  He ran away, resorted to thieving to survive, and found he was great at it 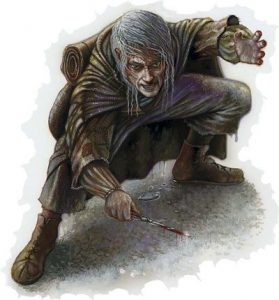 (though he did lose a finger to the law as he learned).  He even managed to marry another halfling named Kora.

Viag quickly made a name for himself as he would steal anything for anyone so long as he got paid.  Once, he stole a newborn human for a barren – but wealthy – couple.  One night sometime later, he boasted about this – his greatest crime – a little too loudly while drunk.

Word got around quickly, and he came home one night to his dead wife and an ambush that he just barely managed to elude.  He’s been on the run since; evading and seeking penance…the wedding band around his neck a constant reminder of his loss and sin.

Viag is 3’2″ and weighs in at 40lbs; just slightly above average for a lightfoot halfling in both categories.  His jet black hair contrasts with his white skin and gives his gray eyes an eery chill.

He has a single tear-shaped tattoo at the corner of his left eye.  It doesn’t symbolize his only kill…just his most significant one, Kora, the one he believes himself guilty for.  He wears his titanium wedding band on a chain around his neck, and is missing the ring finger from his left hand.

He’s twelve years sober since Kora’s death which he, at least in part, blames on his alcoholism.  Viag jokes about everything but the ring about his neck, the merits of a sharp, concealed knife, and situational awareness.  He’s not terribly smart, but he’s wise in the ways of deception, misdirection, and the art of the dine-and-dash.

Halflings get +2 to Dexterity, along with the traits:

Lightfoot halflings get a +1 to Charisma and are Naturally Stealthy, which allows them to hide behind a creature that is at least one size larger than themselves.

Viag’s background is Criminal, which grants Proficiencies in Deception and Stealth, one type of gaming set, and thieves’ tools.  And as a level 1 Rogue, he’s granted the Sneak Attack trait, which allows an additional 1d6 damage on an enemy when Viag has advantage.

Our illustrious DM, Erskine, proved remarkably patient with our thousands of questions, slower play, and constant need of direction or clarification.  We managed to just about clear episode 1, session 1 of Hoard of the Dragon Queen.

Our time ran short, but Viag managed to kill 9 kobolds, 3 occultists, and 1 guard – the highest kill count of the campaigners by a good bit.  Quick in, make with the stabby-stabby, quick out.  I really enjoyed his style of gameplay.

Maybe my favorite moment of our time together was when a dragon attacked the keep and the DM asked what I would do.  My Chaotic Neutral alignment had me seeking a hiding place!  I figured Viag would leave that kind of work to the heroes, who promptly tried to follow him into hiding but were reminded of their alignment by our DM and forced to face a threat they were wholly unprepared for.

Classic Chaotic Neutral:  There’s nothing in it for me?  I’m out.  I imagined myself laughing at their misfortune as I watched from between the slats of the barrel I had climbed into.  Suckers.

I’ve rounded up a few willing souls to begin a new campaign.  I have the option of bringing Viag to the table, of course.  He’s still a level 1.  But I’m thinking of rolling a new character.  I thoroughly enjoyed crafting the backstory and selecting Viag’s class and background from against that backdrop.

He may not embark upon this newest adventure, but Viag won’t be lost forever.

The Newest Storyline for Dungeons and Dragons: A Review of Princes of the Apocalypse