In the mid-1980s, director James Cameron did an amazing thing: he took a basic premise, cast a bodybuilder that couldn’t act and made a classic science fiction time travel movie. (Along with Back to the Future and Timecop, it is the holy trinity of 80s time travel movies.)

It had an excellent basic premise: the computers are taking over the world, they send a machine back to kill the mother of the leader of the rebellion. But the rebellion sends back a time traveler too, who becomes the father of the rebellion leader when he and the protected mom hook-up. (Having robots chase after you is evidently incredibly romantic.)

But success has its cost. Arnold becoming a huge actor meant that there would be a sequel and Terminator 2 came around, noted mainly with the teenage John Connor being protected by his now super bad ass mom and a Terminator that protects him. They stop the Judgment Day and, if we are being completely honest, it should have stopped there.

But, Hollywood. So since then there have been three more movies, the third one no one should talk about because it is terrible. Then they tried to make a great cast and set it deep into the future, which seemed like a good move. I submit that if you took the Terminator title off the film and changed some character names, Terminator Salvation is a decent sci-fi movie. 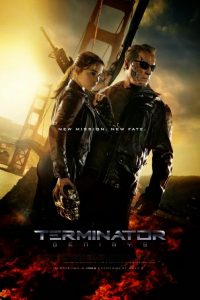 All of which brings us here to the latest installment of the franchise Terminator: Genisys. And let me say, right from the get go: oh man, time travel.

If you said to say what the major fail in the plot structure of the Terminator franchise is, it is really pretty simple: they set a date for Judgment Day that they now have to keep trying to retcon their way around. It makes them do silly things, which in this movie means we get the first hint of a multiverse, multiple timelines and, yeah, it is a mess.

On the whole, the movie is a bit of a reboot, with some major changes happening to the general story.

Kyle Reese is sent back in time to save Sarah Connor. But when he arrives everything is messed up. Sarah has known about the coming doom for years and has been saved and trained by an Arnold model Terminator that she calls Pop. So you get a nice 1984 re-do of scenes from the original movie.

And then Sarah Connor and Kyle Reese jump forward in time again, this time to defeat the new evil Skynet: an operating system that will be on your phone, etc. and ruin your life. (If you had to sum up the franchise, it might be best said as “Technology will kill us all.”)

So, it isn’t a terrible movie and it isn’t a great one. Some thoughts:

Terminator: Genisys gets 6.5 Nerds out of 10. It is a wait and watch it on a Saturday afternoon when you are folding laundry movie. (And I’d give it a whole .5 higher if it didn’t have that ridiculous spelling.)