One of the great things about comics books the allowance it creates for impressively wild and fantastical displays of future technology.

And comic book technology isn’t just little doohickey gadgets with the beeping and the blooping and the button boppin’. Oh, no. It’s the Danger Room, and Helicarriors, and whatever device that Reed Richards creates in 30 seconds, yet has cosmic significance.

But comic book tech takes on a personal scale as well, and is ridiculously ubiquitous. For example, no one thinks of Captain America as a technology based hero, but what was the Super Serum if not genetics technology that allowed us comic readers to dream about the future capabilities of human athleticism?

In order to keep things manageable, we won’t include Hank Pym (biology enhancements), or Thor (alien weaponry), or Cable (big futuristic guns), or whatever other oddball categories that could kinda sorta maybe get lumped in with technological enhancements. 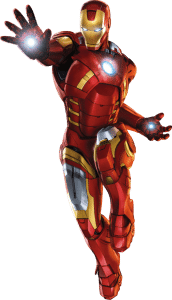 First on this list had to be Iron man, even if you could create an entire list of characters that employ exoskeleton suits (War Machine, Mach 5, etc.).

Tony Stark has no superpowers other than witty banter and his ability to dream up the future of technology. But in his Iron Man suit, he’s one of Marvel’s Mightiest Heroes, and a character that can launch a movie empire.

Iron Man tech has evolved over the years to the point that it’s intrinsically linked with Stark. Also fun is it’s MacGyver-like nature, meaning that no matter what the situation calls for, it seems that the Iron Man suit had that functionality or weaponry built in from the beginning. That’s good comic book tech, folks. 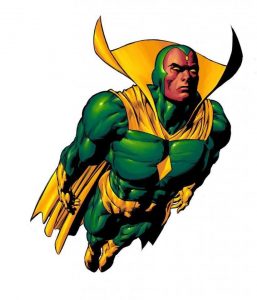 A centerpiece of Avengers: Age of Ultron, I had to include the Vision. But, of course, he has a rich history far before the movie.

The Vision is an artificial intelligence/life-form/android, who has a Solar Jewel (or Infinity Stone for the movie fans) in his forehead that absorbs solar energy, which both powers him and allows him discharge this energy as optic beams.

The Vision also possesses the ability to alter his density, which at its lowest allows flight and intangibility, and at its heaviest provides superhuman strength, immovability, and a diamond-hard near invulnerability.

But beyond being a being of fighting technology, the Vision is also a lover. His romance with the Scarlet Witch is one of the most well-known love stories in comics.

Doctor Otto Octavious has such a rich history in comics, that it’s easy to take for granted the technology he employs.

Stop me if you’ve heard this one, but Doctor Octopus has four mechanical arms that are fused to his spinal column, giving Doc Ock 4 additional limbs that are mentally controlled just as his arms and legs would be. Even Spider-man’s vaunted Spidey sense and enhanced reflexes can’t always keep him out of the reach of Doc Ock’s 8-limbed-grip.

But Doctor Otto Octavious is also a brilliant inventor of other tech (and he’ll tell you so), and he was always whipping up other doohickeys or machines to try and achieve his goals. 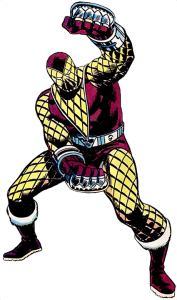 I’ve always felt the Shocker was an under-utilized comic villain Oh! Pardon me for a second…[IDEA: Next list to write…7 Under-utilized Comic Villains].

The Shocker designed a pair of gauntlets with vibro-shock units known as “vibro-smashers” that can project a concentrated blast of compressed air that vibrates at an intense frequency. When activated by a thumb trigger, the gauntlets allow Shocker to throw vibrational “punches” from a distance, throw shock waves at structures in order to weaken or destroy them, or leap incredible distances by directing the air blasts toward the ground in front of him.

To guard himself from the “shocks”, the Shocker designed himself a much-riduculed foam-lined suit which absorbs all vibrations. So what if he wears a pillow-top comforter, I still think he’s cool. 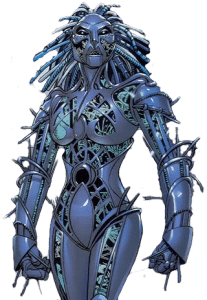 During Joss Whedon’s run on Astonishing X-men, one of his storylines spawned a character.

But now the AI is free and operating under her full autonomy, going by the name Danger. And correct me if Im wrong, but I think Danger currently has a crush on Warlock, which is a techno-character that just missed this list, mainly because I didn’t know how to categorize him. 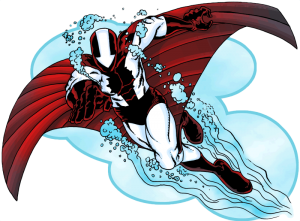 OK, Stingray could plausible just be lumped in the exoskeleton category, but I felt the context of usage is interesting enough that he should get his own entry on the list.

The Stingray battle suit is an armored exoskeleton designed mainly for underwater use. It enhances strength and durability to superhuman levels, allowing Dr. Walter Newell to operate within the crushing pressures of the ocean depths, as well as allowing him to breathe underwater.

Stingray’s chief offensive weapon is a powerful electrical discharge of up to 20,000 volts through air or water.

Stingray has off-and-on been affiliated with the Avengers, Defenders, and the Heroes for Hire. If you need someone to battle Tiger Shark, then Stingray is your guy.

Here’s where I cheat. Forge isn’t technology-based exactly. Instead, his mutant power is his ability to create incredible technology weapons and structures.

The dude had a home with floating holographic platforms for heaven’s sake, all made via his innate ability to “conjure” up technological inventions. In addition, Forge has created some of Marvel comic’s iconic weaponry, including a gun that could strip mutants of their powers.

Thanks for reading. If you’ve enjoyed Nerds on Earth, please do us a solid and spread the word via the social media buttons just below.

Captain America: The Hero We Need