Captain America: The Hero We Need

Happy 4th of July everyone!  On this day every year we take time to put aside our cares and celebrate the things that make us proud to be Americans: Hot dogs, apple pie, and blowing things up. #Merica

So which Super hero is better to highlight today than the First Avenger: Captain America. 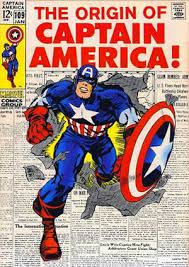 Captain America has been around since the early 1940s and was beloved because he was often pitted against the Axis powers.  Captain America is the alter ego of Steve Rogers, a wimpy kid with a hero’s heart who volunteered for the super soldier program. And Rogers has defended our nation in comics for decades.

Recently, Marvel has successfully taken the former Human Torch—Chris Evans—and fit him into the role of a lifetime.  Evans is perfectly cast as Steve Rogers in the Marvel cinematic presentations of the original comic books.  What I loved about the first movie is that they had to CGI a wimpy body on Evans as opposed to making, say, Toby McGuire all buff for his role as Spider-Man (a better CGI job there is not).

Captain America is everything that Americans love: brave, patriotic, and—of course—genetically modified.  In a group of super hero alphas, Captain America is the true leader because of his unwavering moral compass.  He is a good ol’ fashioned hero, someone who is growing more and more rare in stories these days.

Aside from the group dynamic, people seem to be enthralled with the dangerous, brooding, and even dark-sided anti-hero.  A phenomena in the latest attempt at Superman movies, but a trend that has been in comics for decades.  However, Captain America has fared just fine with the good old fashioned clean-cut hero of yesteryear.

Sure the Avengers are comprised of a team of super powered misfits.  Beginning with the tomcatting playboy Tony Stark as Ironman, and ending with “the one who is worthy” Thor, each of the Avengers seem to have their baggage, except for Rogers.  Aside, that is, from him being taken from his true love from the past, Peggy Carter. But that is just it, he still loves her, even though there is zero chance they would be reunited. *swoon*

Of course I don’t know the deep details of Captain America throughout all the comics, but the movies have painted him as a true throwback good guy.  And TBH, that is really what America needs these days.  It is quite refreshing to have an ethically strong hero to look up to.

If you haven’t seen the two Captain America movies: The First Avenger and Winter Soldier, you absolutely are missing out!

Not that you asked, but my favorite Marvel movie is Captain America: Winter Soldier.

Both Captain America movies are worth multiple views, and my opinion is that the Captain America: Winter Soldier beats out all the individual Marvel movies and even the first Avengers film. 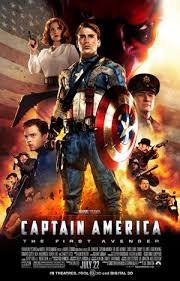 Ultimately, I think what makes Captain America so likable is:

Yes, Captain America has been injected with super soldier serum, so he is enhanced, but he is far from the likes of say Wolverine, so without the natural bravery of Steve Rogers, he would not be the hero he is.  Captain America also treats others with respect, you can see that with his relationship with Sam Wilson—Falcon—in The Winter Soldier.  Even before he knows Falcon is, well Falcon, he is willing to bring him onto his team.

Steve Rogers was always meant for greatness; he just needed a little science experiment to get him there!