D&D 5e Goliath: A Look at the Race

I want to introduce you to Golyat Trollcrusher Ekron-Ashkalon. Golyat’s life has been filled with more than his share of adventure (and loneliness).

First, it should be pointed out that Golyat is an absolute mountain of a man. Golyat Trollcrusher Ekron-Ashkalon is from the race of goliaths. Standing at 7’10” tall and weighing in at 330 lbs., Golyat looks like he was carved from the same stone that makes up the mountain on which he resided with his tribe.

When just an early teen, Golyat carved out a place for himself among his people. The story goes that Golyat’s village was being besieged by a vicious and deformed two-headed troll, but as others in his tribe gathered their weapons and wits, Golyan never hesitated, leaping on to the back of the troll, grabbing tightly, one arm locked around each of the trolls necks.

The troll clawed wildly at Golyan, who still latched to its back crushed its neck and choked the air from its lungs. The writhing and thrashing lasted for what legends grew to say was days, as the troll’s vaunted regenerative abilities kept him upright and in the fight. 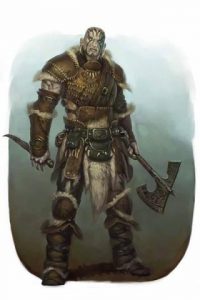 But in the end, Golyan crushed that troll.

From that point forward, Golyan was recognized as his tribe’s greatest fighter, known for going straight into an opponent, no matter the size. But during one battle, Golyan received a fatal injury, but rather than force his tribe to endure the burden of his weakened state, Golyan alone slipped away in the cold of the night.

Near the brink of death, Golyan was discovered by a mysterious figure who plunged his fists hard into Golyan’s chest. The stranger’s fists burned like they were blazing with fire and the heat surged through his entire body, but miraculously, Golyan awoke the next day, fully healed.

Rather than return to his tribe, Golyan stayed with the stranger and his mysterious companions, slowly learning of their ways.

By now you should have figured out that Golyan is entirely fictional. Golyan is one of my characters in my D&D 5e games, a goliath fighter/monk that just hit level 6.

But even though he’s fictional, I based him off of Dwayne “The Rock” Johnson from back in his old professional wrestling days. I can imagine Golyan cocking one eyebrow, then letting loose with an “Oooooo. Can you smell what the Trollcrusher is cooking?!?”

D&D should be fun, so I thought creating a character that’s a bit over-the-top bombastic would play up that fun, particularly because Golyan is willing to jump headfirst into getting a troll in a sleeper hold.

Now that you know Golyat Trollcrusher Ekron-Ashkalon’s backstory (an important part of D&D 5e), we’ll talk more about the mechanics of a D&D 5e Barbarian/Monk, with a heavy focus on the monk class and the grappling mechanic in particular.

Monks are wildly considered to be one of the weaker classes in D&D 5e, and I can’t say that I disagree with that sentiment, but…

Monks study the magical energy of ki that flows through living bodies, and the energy that monks can harness for great effect. Like, FIERY FISTS OF FURY!

Monks use a d8 for hit dice, which is a hit from the barbarian’s d12. It’s true that the goliath race with their natural size and strength almost begs to be a barbarian, but by multi-classing and going 3 levels into barbarian Golyan gets the benefit of the barbarian rage and reckless attack, which when combined the the goliath Stone’s Endurance, really allows Golyan to both be reckless in combat, but also shrug off big damage.

As a 3rd level barbarian I chose the Path of the Berserker, which allows Golyan to go into that frenzy that I imagined him doing when he attacked that troll (while also subtly calling back the The Rock’s days in the ring).

But then the monk levels come in and I imagine Golyan balancing that frenzy with the calm serenity of a monk who has learned to channel his energy into kung-fu, almost like the big hulking rastler who discovered he could also fly off the top rope.

The monk class allows Golyan to have great bonuses to movement and unarmored combat. At 3rd level I committed Golyan to the Way of the Open Hand. (Much like the mysterious stranger with the fiery fist, who sort of reminds me of Iron Fist. OK, let’s just say he was Iron Fist.)

I imagine Golyan using the monk’s unarmed combat abilities combined with the grappling rules of D&D 5e. The goliath race already has bonuses that give them proficiency with the Athletics skill and have a powerful built that allows them to interact with larger opponents. Golden is a wrestler, built to push people around like a tavern brawling grappler.

Plus, a monk can totally catch arrows and fling them back (Deflect Missiles). Even if that doesn’t necessarily maximize damage, why would you not want to do that?

Should I Roll a Goliath Monk?

I’m whole-heartedly enjoying my time playing D&D. And I’m not a min/maxer. Had I wanted to fully optimize my D&D 5e goliath, I would’ve left him a straight barbarian.

But D&D 5e makes multi classing simple. When that is combined with two wildly different classes like barbarian and the monk, then layered on top of some of the D&D 5e mechanics like the grappling rules and goliath racial abilities, you can have a lot of fun playing a character

I invite you to find a gaming group and give a goliath a shot. In the meantime, Golyan will be adventuring, hoping to live up to learn the ways of the mysterious stranger that healed him, while also balancing that with the brutal ways of the goliath class. Download the free D&D 5e Elemental Evil Player’s Companion here, which includes full rules for creating a goliath character.

Thank you for reading. If you’ve enjoyed Nerds on Earth, please help us spread the word by using the social media buttons just below.

Thoughts on the Second Half of Daredevil