I was recently hanging out with my nephew, who is nearly 4. He has a sweet pair of sunglasses that have the Avengers on the arms of the glasses. A huge fan, he had recently seen the first Avengers movie and he says to me matter of factly, “These are The Avengers. Except for Black Widow.”

And he wasn’t wrong.

If you have been paying attention to nerd news at all, you learn that it isn’t just on sunglasses. Disney seems to have botched the Ultron marketing when it comes to the first woman superhero they had in the Black Widow. (Now, thankfully, my nephew knows Black Widow not just from the movie but also because she is one of the characters that he and his sisters play on the Disney Infinity game on their Xbox.)

There are better people to take up the fight for superheroes and women than me. But as a proud uncle of two nieces and as someone who works with young people, it is time for us to get our superheroine act together.

So imagine my surprise when at the upfront reveals for advertisers for their new shows, CBS released a 6 minute hype reel for Supergirl. And you know what? It was good. And it wasn’t just me that thought so. Most of the twitter verse really, really liked it. 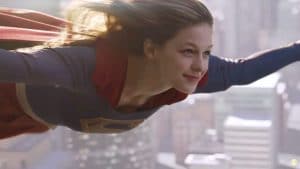 Now, because there is nothing that we can’t immediately criticize, some people immediately wanted to make it a hacky romantic comedy show. And, to be fair, there are some moments like that. But…there is more too! Here are some of thoughts that I have had about the clip:

I really want this show to be good. Because my nephew has two older sisters. And when he blasts around and talks about being Iron Man or the Hulk or Spider-man or Thor, I want his sister to be able to blast around just as much with a hero that they can look up to as well!  So, please, please, don’t screw this up CBS!

To our female readers in particular, are you looking forward to Supergirl? Let us know in the comments below. And if you’ve enjoyed Nerds on Earth, please help us spread the word by sharing with your friends, using the social media buttons below. Thanks for reading.

D&D 5e Goliath: A Look at the Race