Hello nerds, welcome to our weekly review of Supergirl!  This week is Supergirl episode 207: The Darkest Place, and it had a nice little twist and A LOT of surprises!  So, let’s get to it!

A Recap of Supergirl Episode 207: The Darkest Place

This episode started Quinten Tarantino style, jumping right into action, then taking us to 24 hours earlier to lead us back to the climactic point at which we started.

We start with Supergirl battling Hank Henshaw, and Hank looks ready to destroy her when we get flashed back 24 hours earlier.  As the viewers, we had plenty of time to develop all sorts of theories before finding out that Cadmus had saved the Real Hank Henshaw and turned him into a cyborg who calls himself, “Cyborg superman.”

This week’s episode gave us A LOT of Cadmus.  At the end of last week, Cadmus had captured Mon – El.  This week they used him as bait to lure Kara Zor – El to their hide out.  This is where we picked up the episode and her battle with Hank.  She is then captured and imprisoned next to Mon – El. 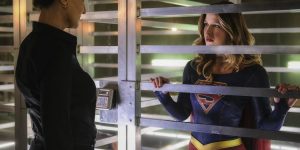 Kara has a conversation with the leader of Cadmus and immediately recognizes her as Lillian Luthor.  Lillian threatens Mon – El with death to get Kara’s blood, which at the close of the episode Cyborg Superman uses in the fortress of solitude.

Oh, and how do Mon – El and Kara get out of the Cadmus facility?  Jeremiah Danvers to the rescue!  Unfortunately, when Alex goes back to get him, the facility is completely packed up. 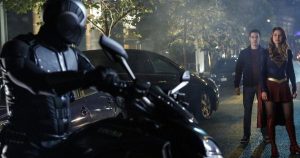 While all of this is going on, someone is making life difficult for Guardian.  As James Olsen and his sidekick Winn are busy trying to capture criminals in national city, a new vigilante—who we call Vigilante…honestly, some of the names are rather weak—does not stop at capturing, he aims to kill.  In turn people are appropriating the kills to Guardian. In the madness of trying to help clear Guardian’s name, Winn accidentally reveals the identity of the new hero to Alex, who helps Guardian stay in the clear for now, but it is sure to get tricky keeping his identity unknown to all.

And if all that wasn’t enough, we had the big reveal of M’gann Morzz as a WHITE MARTIAN!!!  J’onn has begun hallucinating so he has more blood work done.  He puts it all together and confronts M’gann.  She reveals that she is a white Martian, and was on the planet when the Green Martians were being eradicated, but she and a few others couldn’t do it any longer.  They even tried to free as many Green Martians as possible. 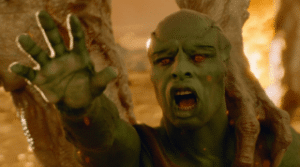 The story didn’t cut it for J’onn and he takes M’gann into custody at the DEO.  It is there that she explains to him that now that her blood is in his system, he is turning into a White Martian and there is nothing he can do to stop it.

Ok, so this week’s episode was jam packed with action and major developments.  That’s not even talking about the regular old Earth type drama we get every week.  The love triangle with Kara just got wider as Mon – El seems to have taken a liking to her, FINALLY!  As well as Alex and Maggie seem to be back on again…ish.

A Review of Supergirl Episode 207: The Darkest Place

After this week’s episode, we are left with a few MAJOR things to ponder.

How extensive is Cadmus?  We know they have contributed a couple of imminent threats in past episodes, and now they have revealed their big gun, Cyborg Superman.  We at least had one question answered—what has become of Jeremiah Danvers?  He doesn’t seem to be under the control of Cadmus, however, that could very well have been a smoke screen as they seemed to get what they wanted from Kara—her blood.

How will the process of changing to a White Martian effect J’onn?  We have been concerned with how M’gann’s White Martian blood was going to affect him anyway.  Now we know the answer.  However, perhaps he will keep his good nature even after transformation.  Or perhaps he will become a new threat to Supergirl and company.

Lastly, with Mon – El developing eyes for Kara, how will this shift the team dynamic that is currently being built?  Winn, of course, has always carried a torch for our leading lady, and James Olson created a love triangle as it was.  As James and Winn have grown to understand one another and develop a friendship throughout, will Mon – El fit in the same way, or will he divide the supporting guys in Kara’s life?  Only time will tell.

Ok, so there you have it, the recap and review of Supergirl episode 207.  My head is spinning after this one as we had a lot of things to process!  This episode is easily a 9.7 Nerds out of 10 and may have just set the bar that much higher for all episodes to follow!