Hello nerds, welcome to our weekly recap and review of Supergirl!  This week it is Supergirl episode 205: “Crossfire”, which followed a pretty consistent format used throughout the show: an imminent threat, building an ongoing threat, while adding some drama to our Earth back drop. (Last week’s episode is here.)

A Recap of Supergirl Episode 205: Crossfire

The imminent threat this week was a trio of criminals who were equipped with alien firepower. We first see this gang of thieves pulling a heist in close proximity to Kara and James Olson. Kara quickly changes to Supergirl and tries to dispose of the gang only to be done in by the aforementioned alien tech.

During the melee we see James Olson try to help Supergirl as much as possible but this ends with his father’s camera being destroyed, which triggers something inside of James and pushes him to try his own vigilante brand of crime fighting. 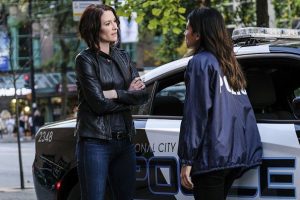 There are multiple encounters with the trio and in the end, Supergirl is able to defeat them with a little help from her friends, namely Lena Luthor. As we remember from last week, Lena struck a deal with Kara; the info on the alien fight club for a favor to be redeemed later. Well, Lena didn’t wait long to cash in and asked for a meeting to be arranged with Supergirl.

When all is said and done Lena Luthor askes Supergirl to act as security for a Gala she is throwing—which ends up being a trap for the criminals. Once the trap is sprung, the alien tech is destroyed and the gang taken into custody.

During the episode we find out that Cadmus—our growing threat—has supplied the criminals with their alien ammunition. This opens the door to a conversation between the gang leader, Mr. Minor, and the leader of Cadmus—a woman who mysteriously had yet to be named.

Well, we get her true identity in a bombshell at the end of the episode. SHE IS MOMMA LUTHOR!!  Mrs. Luthor also had explained that she is trying to help protect the Earth—from aliens—primarily for the sake of her children (Lex and Lena) by whatever means necessary.

We see that she is true to her word in keeping Cadmus going at all cost as she disposes of the gang in eerie fashion. Do you get it? EAR-y. Hey, you can’t read a review of a cheesy television show without getting some cheesy jokes, OK!?  Speaking of cheesy, the Gala laid the setting for a nod to the old Christopher Reeve Superman movies having Kara and Supergirl needed in the same place at the same time.  All joking aside, Cadmus is a threat which is growing fast. 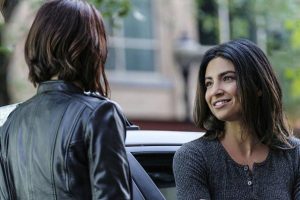 Interestingly, our characters share the same desire as Cadmus for a safer Earth, though they do so in vastly different ways. Cadmus operates in the shadows and uses fear and aggression. While our main characters work within a stricter moral code.

The Earth they are all fighting to save is the perfect added back drop for our show as we get a lot more of the drama and levity through these interactions. We of course have a mixture of humans and aliens as our main characters who work together in a variety of ways.

Kara Danvers operates as a cover for Supergirl like Clark Kent is for Superman—another great nod to the old movies is when Kara pushes her glasses up her nose in the exact same manner that Clark would! Some of our human characters know Kara is Supergirl, and some do not. This enhances characterization as we watch how Kara navigates the “ordinary world.”

Kara tries to bring in Mon-el, our alien from Daxom, into the “ordinary world” with her. His cover is Mike the intern at CatCo. However, it is clear that Mon-el may not be cut out for a “ordinary” persona, something that might add a little change of pace from the normal secret identity platform. We also gained more depth to Lena Luthor as she showed her nerdy techy side completing her trap alongside Winn. Another story line that may take a few episodes to completely unfold is the relationship between Alex Danvers and Maggie Sawyer.

A Review of Supergirl Episode 205: Crossfire

The big reveal that the mystery woman running the anti-alien task force known as Cadmus is no other than Mrs. Luther is HUGE for a couple reasons.

Cadmus is without a doubt the big bad of season 2, and with the tie in to the Luthor Family it will force Lena into a decision at some point, family loyalty at the sake of her moral high ground.

We also know that Mr. Danvers is in the possession of Cadmus and if he has been assimilated as a part of Cadmus, that will likely force the Danvers girls into a dilemma upon the show down.

An additional something to be mindful of is the new direction with Jimmy, sorry, James Olson, who is tired of being a sidekick.  He has Winn making him a suit and he apparently has a name all picked out ready to go. The one question here is, from a viewer perspective, will it convolute the story with too many heroes and not enough supporting players. Balance matters.

This was a solid story building episode with decent action.  I give it 8.5 on the Nerd scale.