Hello nerds, welcome to our weekly review of Supergirl!  This week’s Supergirl episode 208, “Medusa,” not only had a lot of action and storyline, it also kicked off crossover week for the CW superhero shows! So, let’s get to it!

A Recap of Supergirl Episode 208: Medusa

We begin the episode with our core group of characters together for Thanksgiving. This setting gives us a lot of the Earth backdrop drama that plays out during the episode.

However, during dinner no one comes clean about anything as a space time continuum rift appears, then vanishes. But we’ll get to that. Later in the episode Alex does come out to her mother, which is well received. Alex then tells Maggie about it and thanks her for helping her get to that point. 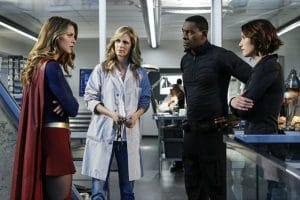 Later still, Maggie almost dies at the hands of Cyborg Superman and this pushes her to treat life as short lived, jumping into the relationship with Alex she was avoiding. Mon – El also has a life and death experience at the hands of the Cyborg Hank Henshaw which leaves him defeated and he then almost dies because of toxins that Hank released in the bar in which Mon – El frequents. Mon – El then kisses Kara in a medical induced stooper.  Lesson learned: don’t go up against Cyborg Hank if you are hiding feelings for someone!

While that would have been enough action to deal with, it only scratches the surface. Cadmus is front and center of this episode—as if you hadn’t already guessed with all the Cyborg Superman conflicts.  In a surprise move, Cadmus launches their big evil plan of trying to eradicate all aliens from Earth.

Using the biochemical weapon, Medusa, developed by Kara Zor – El’s parents on Krypton. Medusa is an airborne weapon that kills all aliens without Kryptonian blood. Mon – El was exposed right after his encounter with Cyborg Hank, but as Daxomites share some DNA with Kryptonians, it is taking longer to kill him, giving Eliza Danvers plenty of time to come up with a cure. A cure which also cures J’onn J’onzz of his White Martian blood cells and returns him to normal! Well done mother Danvers! 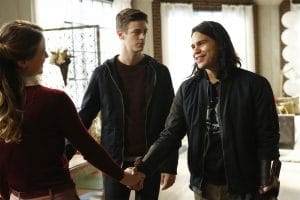 Cadmus’ plan also requires some isotopes in possession of L corp and Lena Luthor. And while previously, Lena seemed to be a different type of Luthor, she teams up with her mother Lillian to release the toxins into the National City air, though she double crosses her mother and gets her taken into custody in the process.

While Lena and Lillian were releasing Medusa, J’onn and Kara show up to stop them.  As J’onn and Cyborg Hank fight we see another Space time continuum rift—don’t worry, we’re almost there!

Then, just as we think the episode is coming to an end, we see one more space time continuum rift and the arrival of Barry Allen and Cisco! They meet Kara in her apartment and ask her for her help back on their Earth.

A Review of Supergirl Episode 208: Medusa

Ok, so with all that we come to a few things I’d like to discuss.

First, I hope that wasn’t the big Cadmus showdown we’ve been waiting for, cause if it was…lame.  At least Cyborg Superman got away and therefore can breakout Lillian Luthor for more wrong doing.  However, it may be a way to draw out the Cadmus storyline even longer and that just isn’t the way to do things!  Plenty of other bads to move on to once Cadmus is disposed of.

Second, it is good to have J’onn J’onzz back normal again.  Throughout this series Martian Manhunter has become one of my personal favorite superheroes and it would have been tragic to see him end as a White Martian. It is also good to see the development of Mon – El continue. I like his romantic storyline with Kara far more than any of the other hinted at possibilities in James Olson and Winn.

Lastly, crossover week promises to be a fun week!  I am not nearly as caught up on the Flash as I’d like to be, and I have only seen Arrow and Legends of Tomorrow a few times each. However, this week I am sure to be watching each show as they team up to fight a serious group of Aliens! Who knows, maybe it will spur me to watch the other shows as faithfully as I do Supergirl.  Wait a second, maybe that’s why CW is doing this crossover week.  Diabolical!

There you have it, my recap and review of Supergirl 208.  I was a little uneven on the Cadmus storyline if this is how it is concluded, so for now, I give it just an 8.1 out of 10 Nerds.  However, I doubt this is the end of Cadmus.