Hello nerds, welcome to our weekly review of Supergirl (read last week’s here)!  This week’s episode, #206, was jam packed with surprises, so hopefully I can do it justice in under 1000 words!

A recap of Supergirl episode 206: Changing

Supergirl episode 206, titled “Changing,” could have been aptly named “Identity,” IMHO.  The episode advanced a lot of characters’ arcs by focusing on changing identities throughout! 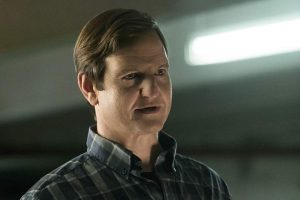 We, of course, had an imminent threat, and it was a powerful one at that!  The opening scene showed an environmental doctor, Rudy Jones, attacked along with his colleagues.  We find out that Dr. Jones’ body was merged with an alien parasite who gains power by sucking life from other beings.

This left normal humans completely depleted, and took a serious toll on Kara and J’onn after their first encounter with the being.  The Alien parasite is eventually overthrown by a team of heroes—which we will get too—and some smart thinking on Supergirl’s part!

While Kara Zor-el is still the leading lady and the show’s namesake, there is the beginnings of a team of defenders of National City forming.  First off, she and Alex continue to reach out to Mon-el about using his powers for good.  The two aliens have another argument over Kara trying to fit Mon-el into her ideals, like only a Daxamite and Kryptonian can, which leaves Mon-el in frustration.  It is Alex who is later able to strike a chord with Mon-el and get him thinking of his potential for good.  When Kara and J’onn Jonzz are mending after their encounter with the alien Parasite, Mon-el responds by taking on the Alien.

Luckily he is joined by none other than James Olson, who has been outfitted to fight evil by our resident genius, Winn.  James calls himself “Guardian” (a name I had to look up); the guardian is a moniker that in DC comics belonged to James Harper, a police officer turned superhero.  It therefore looks like we have a composite character/nod to one of the lesser known—at least to me—DC comic series.  Mon-el and Guardian were able to keep the Alien Parasite at bay until Supergirl arrived to save the day. 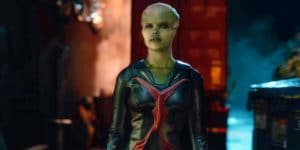 The episode also moved forward with M’gann Morzz and J’onn Jonzz.  J’onn was hit pretty hard in the fight with Parasite and lost a lot of blood.  Alex Danvers convinces M’gann she needs to help with a blood transfusion as a fellow green martian.  If we remember back two episodes, M’gann transformed to a white martian.  She reluctantly helps, but before the transfusion she tells J’onn “I’m sorry,” in his native alien tongue, which almost certainly confirms that M’gann is a white martian parading as a green martian and should NOT have given her blood to J’onn.

M’gann was not the only one faced with hidden identity as we see Alex Danvers face something that has been stirring within as she grew closer to Maggie Sawyer.  Alex comes out to Kara and admits this is something she has repressed her whole life.  We also see Alex deal with a bit of disappointment in Maggie’s response to her wanting to jump right into a romantic relationship and this has created a little drama for Alex.  Until now, Alex has been an emotional rock of a character, but this week’s episode has shown her to be more than just a special DEO agent, but a real person with emotions. 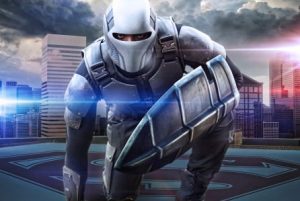 ear the end, a conversation between James and Winn confirms that they will not tell Kara that James is Guardian just yet.  This helps to create the interesting dynamic of the Earth backdrop as our heroes are not just heroes who fight bad guys, but also have an ordinary relationship to Earth as well.  One of the fun and typically comedic ways the story is advanced.

Lastly, just when we thought this episode was not going to have a Cadmus advancement, we see Mon-el (with his new-found sense of good) trying to help a sickly homeless man, though that man was a Cadmus trap that leads to the capture of Mon-el.  So as quickly as he looked like a burgeoning ally, he is gone and in the hands of perhaps the worst evil National City will experience!

A Review of Supergirl episode 206: Changing

Like I said, changing Identities was the name of the game this week and with that comes a few things:

First, we seem to have an ever-shuffling deck of cards in terms of show heroes.  Just as we are introduced to someone appearing as a hero, or vice a versa, they are seemingly put into a position to switch our original thought.

Second, what will happen to Mon-el at the hands of Cadmus?  We are also still waiting to see what has become of Alex and Kara’s father as he is captive of Cadmus as well.

Third, what’s the deal with M’gann?  As a white Martian, she is an enemy of J’onn by their nature, but perhaps she isn’t as an individual.  Even more importantly, how will her blood affect J’onn?

Fourth, will Alex continue to be a stabilizing factor in Kara’s life or not?  As we watched Kara come to terms with her powers and her responsibility to rise as a hero, she often turned to Alex for support.  Is it Kara’s turn to help Alex or will this strain the relationship as Kara has so much already going on?

While I hate to leave so many question on the table, I have no more answers than the casual fan as I have VERY LITTLE background with DC.  It is fun to catch up in the DC universe with a show like Supergirl!  And this episode did a great job of advancing the storyline well, so I give it an 8.9!

The Inhumans come to TV. What and who should you know?