Clave Board game sales are rising every year and the design of games has never been better. It’s a great time to be an analog gaming nerd. What are you some games you nerds have been playing? Newcomers first, so we’ll give the floor to Turff.

Turff Thanks, Clave. Probably the hottest thing on my table right now is Star Realms. It’s a great two player deck builder with a heavy space theme. Deep enough to engage me, simple enough with the mechanics that my 9 year old daughter wants to play every 5 minutes.

Clave Andrew is a card gamer. I bet he’s played that!

Andrew Star Realms is the one from the folks who put together the old Star Wars CCG, if I remember correctly.

Very reminiscent of those mechanics. Not a bad time.

Though now you don’t have to build a Luke Deck to win.

Clave I’ve played the iOS version, so one of you tell me how it feels to play it.

Andrew I only dabbled when it was new, so that’s up to the new guy.

Turff It’s a pretty quick set up…cards for your starter deck, cards for your life, one special set and the rest is deck. It feels a bit like Ascension, but without all of the little gems.

Game is quicker than Ascension as well. We generally knock a game out in 15-20, unless both of us are struggling. There are a few groups of allies, and if you are able to get a deck full of one or two, the power ramp is pretty fun. Several cool and small expansions available as well.

Andrew With all the board and card games I’ve played, I have somehow never played Ascension. One of these days…

Clave Fast games are excellent. Heaton, what have you been playing?

Andrew My board gaming has slowed down in recent memory, but I can always get together a group to 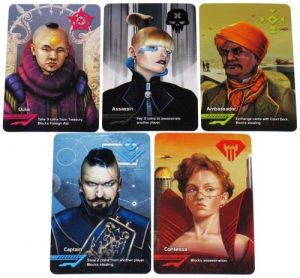 play Coup or Love Letter, two of the purest games I’ve ever played.

Or of course the perennial favorite, Cards Against Humanity.

Clave Those are two really fast card games. Great games that folks can put in their pockets.

Andrew Coup is my personal favorite of all the modern games focused around lying, an oddly common thread these days.

If you ever get a chance, you should check out Secret Hitler. I got to play that when I was in Seattle. Super fun.

I’m not saying Hitler got elected, but I am saying my side won.

Clave I’m about to drop a big one on you two. My wife and I have been playing through Pandemic Legacy. We’re going into the November session. Are you two familiar?

Andrew I have played Pandemic, but Risk is my Legacy game of choice.

Started a new board with some friends a couple months ago, really need to get back to it.

Clave Turff, I know you’ve played. Why don’t you describe it briefly for folks.

Turff For those that have played Pandemic, imagine weaving the same mechanics into a larger story. This story plays itself out within an ever changing world that comes to live with secret boxes and dossiers hidden in the game box that constantly change the rules, game bits, and game play. On top of that, the game adjusts the difficulty to keep you challenged as you go. It is the perfect game for a group of folks that enjoy taking on a challenge together.

My game is with a couple of the other Earth Nerds, and we are having a blast (and kicking a little backside, TYVM)

Clave Having a board game tell a story is something that many modern board games embrace. It’s pretty great.

What else have you been playing, Turff?

Turff I’m just getting started with it, but the fam is trying out Time Stories.

Turff We are still getting are heads wrapped around it, but it doesn’t seem that bad. It is definitely another game (as the name would imply) that is big on story content and puzzles. I’d tell you more, but I’d have to kill you.

Clave I don’t want you to do that.

Yeah, like Pandemic Legacy, it comes with a sealed deck stacked in a certain way. Telling much more would spoil some of the fun.

Clave Heaton, have you played Dominion? 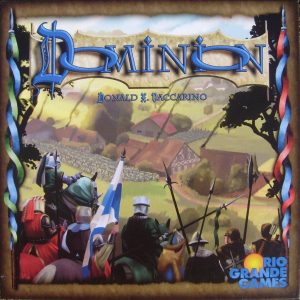 Andrew Though speaking of angsty, I have been lamenting the recent news out of Fantasy Flight about their breakup with Games Workshop.

Andrew Can’t say I have.

Clave I live in the land of Fantasy Flight Games. Perhaps I’ll drive up there this week and put my ear up against the wall to see what I can learn.

Andrew I think all you’ll learn is that GW decided they should have all of the money instead of just most of it. Hopefully they’ll do some more board stuff on their own after the deal finally closes.

Clave My wife and I have taught Dominion to at least 4 couples. It’s our go-to gateway game, even more so than Catan. Dominion is the grandfather of all deck building games. It has no theme to speak of, but it’s super well designed and can be picked up easily by new folks, but still enjoyed years later. One of my all time favorites.

Also a great way to spend lots of money on expansions.

Turff And they are about to come out with “version 2” of some of those expansions.

Turff Have any of you played Sushi Go?

Bought the Party Box in Seattle. Interesting upgrade to the original.

Andrew More of a revised edition.

Andrew It doesn’t add to the original, since i think it has all the same stuff as the original. but there is also a conveyor belt board with a bunch of cardboard tiles that are a separate consideration from the cards.

Along with new cards as well, I think.

All in a fancy carrying tin.

Turff Sounds fun. I love the drafting mechanic. Underused in games in general. The theme matches up to the game well, also.

Clave Turff, you have one more you want to share to close us out?

Turff I just picked up Patchwork, as well. Another two player game by Uwe Rosenberg (of Agricola and many other fame).

In this one, you compete for odd shaped bits of fabric to add to your patchwork quilt in an effort to earn the most buttons.

Turff Hey, quilts can be fun…

But seriously: it’s a fun abstract game that could get pretty competitive among advanced players, but is very accessible to younger ones as well.

Clave Well, we shared a lot of games! And it’s clear we like cards.

Andrew I do have one thing to put out there.

Andrew I made one important purchase in Seattle, and I haven’t gotten to play it yet, but I’m putting out the call for anybody who wants to, cause I need to play it again finally. 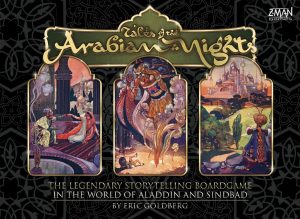 I found a copy of Tales of the Arabian Nights.

Clave Seattle took all your money.

Andrew Hadn’t seen it in years, finally found one with some guys selling all kinds of old crap.

One of my friends bought an original copy of Cyborg Commando.

Turff I’d love to hear what you think of Arabian Nights.

Andrew Review: Greatest Board Game Ever.

I’ve played it before, just been so long I really want to do it again.

I appreciate Cyborg Commando. It has amazing cover art.

Andrew It’s from 1987. Board games weren’t so advanced then.

Clave This was fun. We’ll have to do this again some time. I didn’t mention a single miniatures game, which is criminal.

But maybe next time.

Get to Know the Basics of Steven Universe!