Get to Know the Basics of Steven Universe!

When I decided to walk away from The Walking Dead after the season premiere, I asked around for ideas on new shows that I should try or shows that might have somehow gotten under my radar. One of the mentions that intrigued me was the Cartoon Network original series Steven Universe.

Part of why the show intrigued me was that the excellent podcast Pop Culture Happy Hour from NPR had recently spotlighted the show and the discussion around it intrigued me. The show’s creator Rebecca Sugar is the first solo female creator on the Cartoon Network, having moved into the role from a role as a writer on the hit show Adventure Time. 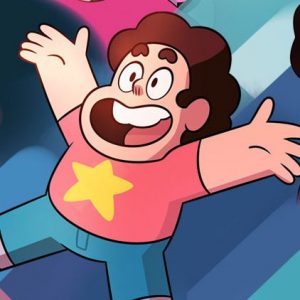 The basics of Steven Universe are pretty simple. Steven Universe is an adolescent going through puberty. But there are all kinds of twists. He is being raised by his trio of aunt-like characters: Garnet, Amethyst and Pearl. Each of them has a special gem and power that extends out of it and they have work protecting Earth from those like them.

Some of the standout parts of the show:

Surprisingly advance emotional storytelling. Steven is being raised by these aunts as well as his dad, with his mom, Rose Quartz, not being a part of his life. The nuance and maturity the show does this with is quite remarkable. 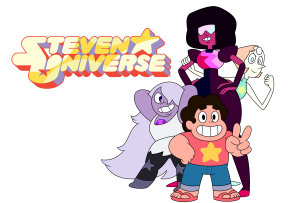 This show is all about gender and gender identity without using it like a sledgehammer. The heroes of the show clearly are Steven’s aunt, who are all uniquely feminine in their own way. It is a remarkable thing for a cartoon show to maybe be the most intelligent thoughtful show dealing with these issues on television today.

The episodes are tight, compact 11 minute shows that are packed with story and jokes. It is rare today to see a creator work within the bounds of such a limited form. Sugar and her team have managed to make the show a stellar success by embracing that formula. And while on the surface there are things that seem to be repeated, the show is developing a long term depth. Think about the Looney Tunes with a complex evolving story and you get closer to what this show really is.

It uses music really well. For instance, in episode one, Steven sings the ad jingle for the ice cream treat he loves that appear to be going off the market. It is fun, sincere and made me instantly connect with the character. Who hasn’t lamented the disappearance of something they hold dear? If there was a Twinkies theme song, I would have sung it when the world almost lost Twinkies. That is just one example of how music works to make this show have a deeper level.

So, if you are like me and have some time to find and invest in a new show, don’t let the cartoon label or the Cartoon Network label scare you off from Steven Universe. This smart, all ages show is a great one to check out and you will know pretty quickly if it is for you or not. It most definitely was for me and I am glad to be working myself through the available episodes on Hulu.

Review of Acquire, the Board Game with Many More Buyers than Sellers